Missionary Moment: A Prince from Ghana baptized in Virginia

Mark Albright is the president of the Washington DC South mission and shares these missionary stories with Meridian Magazine.  This letter comes from Elder Peniueti Ta’ufo’ou.

If you want to share a missionary story, send it to President Albright by clicking on the “email author button” by the title of the article. Please note the names of new converts and investigators will be changed to maintain privacy.

Elder Davie, Elder Harper, and I were at church on Sunday two weeks ago.  As we prepared to walk into the Mt. Vernon Ward sacrament meeting, a recent convert named Patrick Onoche, a Ghanaian, approached us with another man, also from Ghana. Patrick introduced us to the man as his uncle. As we discussed the gospel with this visitor, we discovered that he is actually a prince from a tribe in Ghana. His name is Oheneba. He and his family are the actual caretakers for the numerous idols and shrines owned by the king of his tribe. He was born into royalty and it has been his life-long duty to protect the king’s shrines and idols.  He is now about 75 years old.  He showed us photos of the idols and the king with his family. His passport also confirmed that he was a tribal leader.

Last month he was asked by the king to come to America to purchase a new idol from the gold artisans and craftsmen in New York City.  Sometime after arriving in New York to acquire the new items, he heard a voice or impression in his mind tell him that he would not find salvation by worshipping idols.

As he pondered on the words that had come into his mind, he remembered the warm and sacred feelings he had experienced when he had driven past the LDS Temple in Accra, Ghana.  He recalled feeling that our temple was a sacred and a holy place.  He then remembered that his nephew Patrick Onoche had joined the LDS Church in Virginia last year (baptized by Elder Doman), so rather than continuing on with his meetings with the gold dealers, he felt a strong desire to fly to Virginia where he met with Patrick.  Patrick immediately taught his uncle about the restoration of the gospel and brought him to attend sacrament meeting the next day where we met him.  After he came to church and learned more about the gospel, he told us that he wanted to be baptized, and that he would not return to Ghana until he was a member of the true Church. 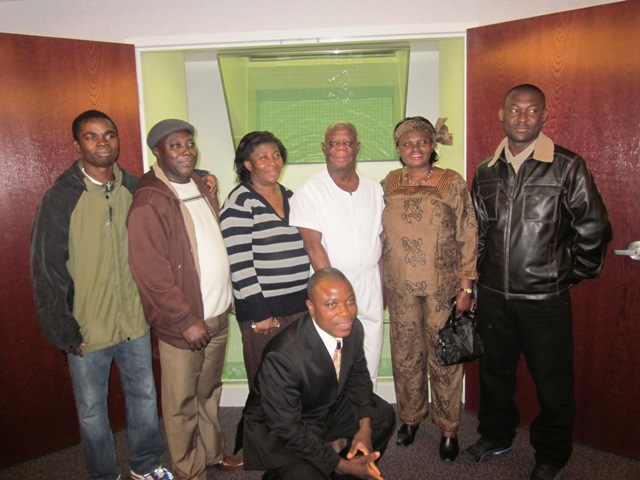 We met with him every day last week to make sure he fully understood the covenants he would be making with God before he returned to his homeland.  After he attended church for two weeks we held a special baptism for him last week, just three days before he flew home to Ghana.  He delayed his flight for several days to accommodate the instructions you provided that he attend church for at least two weeks before his baptism.

Oheneba intends on resigning from his royal position as caretaker of the king’s idols upon returning home, so he can spread the gospel among his people.   We tried to persuade him that maybe he should just care for the idols as a custodian but not worship them.  However, he was adamant that he wants to spread the gospel and give up his leadership position.  He said he was willing to give up all his possessions to become a member of Christ’s true church because he is more worried about his family’s salvation than property or position.

President, it has truly been a blessing to meet Oheneba and teach him the gospel with the help of Elder Davie and Elder Harper.  Thank you for coming to help teach him and baptize him.  We have already heard from Oheneba that the elders in Ghana have made contact with him.

Check out other missionary stories in this series by clicking on the tabs above under Church / LDS Missionary.