LDS Fiction: Anne Perry’s The Sheen on the Silk

Anne Perry is an internationally renowned fiction writer and also a columnist on Meridian.

The Sheen on the Silk by Anne Perry is an epic novel which will enthrall history buffs, but disappoint many fans of the acclaimed mystery novelist.   Set in the thirteenth century ruined city of Constantinople, the famed splendorous city that sits astride the line between East and West, it again faces total destruction as the armies of Charles of Anjou with the approval of the Roman Pope prepare for a massive crusade to conquer the city and continue on to the Holy Land to subdue it and crown himself King of Jerusalem. 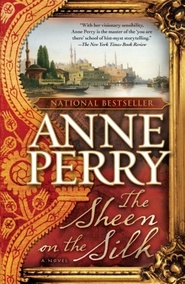 Into this setting comes Anna Lascaris as Anastasius Zarides.  She has journeyed from another city of the Byzantium Empire in an effort to discover what has become of her twin brother who had resided in that city and is an avowed adherent of the Eastern Orthodox Christian faith.  She travels disguised as a eunuch physician.  She really is a doctor and sets up her practice while continuing her disguise as a protection, knowing she won’t be able to obtain the information she needs nor travel about freely as a woman, nor does she wish to reveal her connection to her brother until she has gained a grasp of the political and religious climate of the city.

Her practice grows and she cleverly ingratiates herself with the most powerful men and women of the city and Orthodox Church.  She moves slowly to prevent arousing suspicion as she discovers her brother’s role in a murder and piece by piece learns of an intricate plot to protect the Orthodox Church from being overrun by the Roman Church.  Other factors are at work as well because of the threat  to the city from Charles of Anjou.  Constantinople was thoroughly sacked and pillaged seventy years earlier by Crusaders who burned, raped, murdered, and desecrated churches, carrying away religious icons and family treasures to enrich themselves and the Roman Church.

Unfortunately much of the wealth and religious art was also carried out of the city by prominent native families as they fled before the army, then kept for personal gain and enjoyment instead of being returned to cathedrals when the families returned to claim their city years later.  Now facing another crusade, the city is divided between those who wish to ally themselves with Rome to protect the lives and property of the city and those who battle to retain their own more liberal Church.

Diverse political factions are involved as Venice works to ensure the attack on Constantinople because it means immense wealth for that city as Charles must use the Venetian shipping yards to build his fleet of ships.  The doge of Venice sends Giuliano Dandolo to evaluate or spy on conditions in the beleaguered city. Giuliano has personal reasons for accepting the assignment.  He is in search of information about the mother who abandoned him and his father when he was an infant. He strikes up a friendship with the young doctor he believes is a eunuch.

The popes (there are five of them before Charles manages to buy his candidate the papal throne) send legates who hate each other to pressure the Byzantine emperor to surrender the Eastern Church to the Western and swear fealty to Rome.  One is a good man who sees his faith in God slipping away as he is confronted over and over with the greed and manipulation of those holding religious power. He is never certain of his standing due to the changes instituted each time a new pope is chosen and because of the secret manipulation of his co-legate.

Among the powerful personages of the city are Zoe Chrysaphes and Bishop Constantine.  Zoe was a small child who saw her mother raped and murdered in the first crusade.  She will stop at nothing to protect her church and city and take revenge on those she considers traitors.  Constantine is a sad character, a eunuch, and leader of the Eastern Church who is totally committed to the church and his position in it.  He’s a good man who slowly loses faith as his position and stubborn commitment to his cause exceeds his commitment to God.

The mystery portion of the novel fizzles out and takes a secondary role to the story of the city and to Anna’s and Giuliano’s discovery that though the churches of their time accomplish good, they also shelter a great deal of greed and dishonorable actions and that belief in either church is secondary to gaining personal faith in God.  They learn too that following a church is not the necessarily the same thing as following God.

Let me say up front, I loved this novel and was deeply impressed by the research that went into it and the way Perry made a thirteenth century city so alive and vibrant, I could picture myself there, smell the sea, and feel the dust.  I was in awe of the opulence of the wealthy and disgusted by the squalor and destruction on every hand.  I felt anger and sadness for all the lies, manipulation, greed, and grabbing for power.  How I would love to see the Hagia Sophia in its once great splendor.  I also found many things I didn’t like in the book from oddly cut pages that are difficult to turn to abrupt time and scene transitions and inadequate character backgrounds that lessened the impact of important scenes.  There are too many similar names and the “sheen on the silk” theme is beat to death with too many repetitions of the phrase.  Even though Anna is a fascinating character, I never felt I really knew her. I wondered if this was deliberate because of the eunuch role, neither man nor woman, she played.  Giuliano is probably the best developed character and the one who grows and matures the most.  There are several murder scenes in the book, all of which feel a little odd, as though the author was taking on a different, more distant voice with each one.

I often find myself annoyed with slower paced novels and though there are many things which could have been cut or tightened  in this one, I never lost patience and remained absorbed all the way through.  Readers who expect this novel to be similar to Perry’s Victorian mysteries will be disappointed.  Those interested in casting a little light on the dark ages and gaining insight into journeys of faith and apostasy will be thoroughly satisfied by this approach that is without sermons or preaching.  Members of the Church will find more than one aha moment.

THE SHEEN ON THE SILK by Anne Perry, published by Ballantine Books, various formats and prices, 515 pages