How Evil Poses as Good 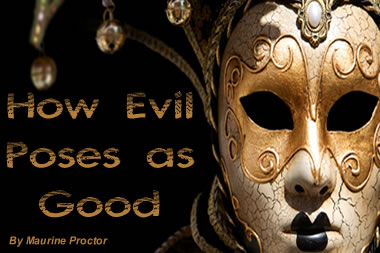 It is curious that in the Book of Mormon the most wicked and wrongheaded people who wreak havoc upon others always proclaim that they are the good. It is their philosophy and worldview, they claim, that is not only correct, but enlightened.

It must be one of Satan’s most seductive tools, telling us that evil isn’t evil at all, that his philosophies represent the higher road. Though some mortals are enticed by evil, knowing full well it is, and some let wicked passions overtake them, it is surprising how much anguish and pain are wrought upon the world by those claiming that their ideas are, in fact, right or advanced or righteous.

Even they themselves are usually fooled. Not many like to think that they are duped or wrong or that their viewpoint is morally degenerate. Certainly, most people don’t wake up and think, today I am going to be about mischief—even when they are some of the prime perpetrators.

Damage Done in the Name of Virtue

Those who have done some of the most severe damage in our modern world have done it in the name of some virtue, proclaiming their moral superiority, while all the time they are spreading darkness.

After one of our political luminaries had recently been caught in an act of adultery, a New York newspaper ran an extensive article surprised that the populous was so shocked and saying that as our notion of marriage evolved and matured we would be more open to this kind of thing. “Evolved” and “matured” in the writer’s words sounds like a world that is progressing, not the recipe for misery the journalist was actually supporting.

Stalin’s gulags and Hitler’s death camps were built in the name of some higher good—ridding the world, they said, of those who stood in the way of their society’s magnificent progress to a higher state.

Life is like a costume ball. Evil ideas mask themselves as good. Every wicked tendency, every idea that lurches us away from God, is usually foisted upon us in the name of virtue or progress or tolerance.

Book of Mormon Abounds in Examples

The Book of Mormon clues us in about this tendency repeatedly, lest we miss the point. It is a primer for recognizing what often is difficult to discern in the world. Just because a philosophy claims itself to be progressive, smart, or advanced doesn’t mean it is. Just because the majority of the elite, the intellectual, the powerful or the wealthy embrace a particular world view doesn’t validate it. History demonstrates that whole nations can become completely wrong-headed and in their stupidity and cupidity are finally destroyed.

The Book of Mormon abounds in examples of the wicked calling themselves good. Of course, our old blinded friends, Laman and Lemuel, never abandon the claim that the people of Jerusalem were “a righteous people; for they kept the statues and judgments of the Lord, and all his commandments, according to the law of Moses; wherefore, we know that they are a righteous people” (1 Nephi 17:20)

It is a marvel that they could hold on to this illusion in the face of a Jerusalem that had become so ripe in wickedness with its fascination for adultery, corruption and power that it was shortly destroyed.

Consider Nehor, who went around proclaiming “that which he termed to be the word of God.” He didn’t say to himself, today I am going out and preach evil and my desire to bear down against the Church is inspired by Satan. No, he proclaimed his righteousness while he pursued his goal of destruction.

He posed as God’s errand boy, and what is just as remarkable is that he did it in the name of tolerance. He preached that “all mankind should be saved at the last day, and that they need not fear nor tremble, but that they might lift up their heads and rejoice” (Alma 1:4).

Now, that’s a happy tolerant philosophy–everybody returning right back to the Lord no matter what darkness they embraced. The problem, of course, is that it isn’t true on more than one count. The obvious one is that the Lord actually has criteria for those who would like to be with him again.

Much more subtle, however, is the posture Nehor takes that he loves and accepts all people and their philosophies. He is preaching for their good. His arms are wide open with acceptance.

That is just flat out untrue, as we see only a few verses later as Nehor kills Gideon essentially for his beliefs. In fact, it is this same, “kind-hearted” philosophy preached by Nehor that inspires the judge in Ammonihah who sets fire to all the believers. So much for tolerance.

Evil just does not come right out and say, “I am evil.” In our modern world, what it says is, “There is no evil. How embarrassing, old-fashioned, oppressive, out-of-step to suggest such a thing.”

Sometimes it says, “Can’t we all just be friends? All points of view are created equal.” Evil claims it is just another idea about what is good, equal in power and outcome. “You have your ideas, I have mine,” the rebellious teenager says to his parents who are trying to counsel him. That statement is supposed to end the conversation; it is meant to be a show stopper.

But evil is aggressive. It may start suggesting that it just wants equal footing with good, that all it seeks is tolerance for itself in its masquerade as an advanced idea, but ultimately evil ideas want much more. Satan wants to obliterate the good, snuff out all light, make religion, commandments, and the moral sense museum relics, dusty memories of the past.

Hugh Nibley asked a searching question, “How does it come about that the most devout and disciplined segment of believers in every age always appear as a despised and persecuted minority, regarded by society as a whole as religious renegades and at best as part of the lunatic fringe?”

It is because evil, calling itself good, seeks to annihilate God and his goodness, marginalize believers and fill them with self-doubt. Evil, wearing its smiling mask, calls good with its own name—evil.

In the Book of Mormon we see the vain folks in the great and spacious building pointing their fingers and mocking the believers who are clutching the iron rod and making their way to the tree of life. I used to think that perhaps their disdain for the believers came from a sense of material superiority or that they were having a much better or jollier time in the floating building. Perhaps, it was merely an eat-drink-and-be-merry attitude that made them wag their fingers and taunt the believers.

Life in our degenerating society has given me additional thoughts. I think they thought that life in the great and spacious building was not just fashionable, but brilliantly right on. I think they had fooled themselves to believing that they were not just superior in superficial ways, but morally superior as well. They were more reasonable, more tolerant—certainly more sophisticated.

Their taunting the folks making their way to the tree of life was not because they saw the believers as being on a vain, useless and difficult journey, not smart enough to come into the building.

It is because they truly hated the gospel outlook of the believers. In our age, the people in the building think the believers are rigid, naive, intolerant and morally inferior.

What infected those believers who wandered off the path, because of the pointing fingers, was shame. It is hard to cling to truth, when the world scoffs and claims that there is no truth except your own feelings of what is right for you. It is hard to hold to God’s commandments when people claim the religious outlook is morally inferior or oppressive to your natural instincts.

Such excuses have been used to justify all sorts of immoral conduct. We hear these false and demoralizing rants. Pornography is good for you because it fulfils a natural, physiological need. To learn to accept their own bodies and not grow up with unhealthy inhibitions, teenagers shouldn’t be taught abstinence. Or television should be allowed free rein to play whatever kind of trash they want in the name of free, artistic expression. To ask for restraint is censorship of the worst kind.

A falsehood repeated often enough does not make it true.

Those who cannot discern Satan’s old trick of masking evil as if it is good may, in their need to be smart, be paralyzed by doubt, look for the good opinion of the crowd, join the intellectual elite. Or they may come to mind the heat, thinking it is just too hard to take being somewhat marginalized in a world that calls something besides themselves good.

These are days that call for us to be wise and discerning that we might recognize evil for what it is, no matter how it masks itself. Laman and Lemuel’s friends may have claimed they were good right up to the point of destruction. Nehor wasn’t preaching the word of God, and his “kumbayah” philosophy, which suggested that everybody’s worldview was equally acceptable to God, actually hid a violent intolerance to true believers.

The people in the great and spacious building, no matter how elite, did not taste of the fruit that was so delicious to the soul at the tree of life.

Evil is aggressive and it seeks our capture and bondage. We can often discern it by its trademarks. It claims it is tolerant of any viewpoint, embraces them all as equals while it silently undoes everything that is Godly. It also proclaims itself as reasonable—and everything else as foolish.

Here’s Korihor in the Book of Mormon, “O ye that are bound down under a foolish and a vain hope, why do you yoke yourselves with such foolish things? Why do ye look for a Christ?” ( Alma 30:13).

He manages to use “foolish” twice in one sentence, as he seeks to make the believers feel dim-witted and unsophisticated for their beliefs.

Just before the birth of Christ in the last book of Helaman, some people in the America ‘s began to see “great signs” and “wonders.” How do the rest respond? They say, “it is not reasonable that such a being as Christ shall come.”

Tolerance and reasonability are two attributes that believers embrace wholeheartedly. No wonder evil, in its masquerade, claims those qualities as its own.

The Book of Mormon could not be more on the mark for portraying a degenerating world that is eerily similar to our own.

We need the Spirit to be discerning for experience shows us that all that claims it is good, is not good. Things done in the name of tolerance may result in the most wicked kind of trampling the freedom of others. The misled may call things unreasonable that come directly from the source of all light, truth and wisdom.