A Moment Awash in Gratitude 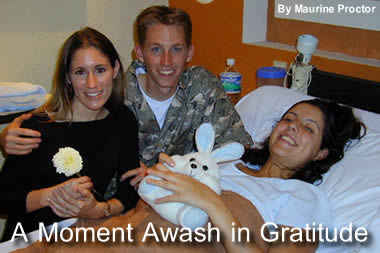 Troubles are not polite. They don’t wait to take their turn, but often pile on you all at once until you feel like a drowning person on the seashore, who just struggles up from a wave and before you can take a breath, another wave catches you and fills your mouth with seawater.

We had a time like that nine years ago. Things were hard. We had just moved from our dream home to live with eleven children in a cramped condo, waiting for a larger move across country to Washington DC . The sale on our home, which had been on the market for three years, had fallen through, and now we were stuck with two very large house payments. On top of that, we were just at the starting point for Meridian Magazine, and the financing, which we had worked on for several years, had also fallen through. We were too new to have an income from the magazine which took our full-time effort.

I already felt adrift and frightened for our future. Then the horrible phone call came from Mexico . Our daughter, Julie, had saved her money to spend a week at spring break, in Puerto Vallarta , with her friend Heidi. She had only left the day before for this longed-for vacation. Heidi’s voice trembled as she told us the news.

Julie had had a terrible fall by the pool and had hit the back of her head hard on the cement and had been found in a pool of blood. No one knew exactly how it had happened. Feeling thirsty, she had left her friend on the beach, and headed back to the hotel pool to find water. Did she faint from dehydration? Had someone pushed her? We’ll never know, but she fell like a tree, straight back on her head, and we understood that it was serious.

Heartsick, we called the hospital in Puerto Vallarta , struggling with the language barrier, to find out how she was. They couldn’t tell us much, but only promised one thing for certain: they would start treating her as soon as we gave them a credit card to use. Our insurance wouldn’t cover the bills in Mexico .

It is often the case that critical illness is accompanied by financial desperation because of bills that mount at a dizzying rate. We ached with worry about Julie’s condition because we knew that head injuries often left long-term disabilities, and it was made worse because of our current circumstances.

We couldn’t get a plane out to Puerto Vallarta for about forty hours and in the meantime, the reports from the hospital were grim. She had twenty bleeds in her brain and her brain continued to swell. The mid-section of her brain had shifted. She had a large subdural hematoma. She was not in a coma, but difficult to awaken.

I knew someone who had one bleed in her brain and her life was completely altered.

When we finally arrived in her hospital room in Mexico , I have never felt more vulnerable. Here was our beautiful daughter, her dark hair splayed across the pillow, with a vacant look in her eyes. She didn’t know what had happened. In family pictures we showed her, she didn’t recognize her aunts and uncles, though she could be coaxed with effort to remember the names of her brothers and sisters. We asked her who we were, and she said without emotion that we were Mom and Dad, then promptly went back to sleep.

What lay ahead for her? We tried not to think the worst about long-term damage to her intellectual abilities and her opportunity to lead a normal life, but, of course, a gnawing worry ate at us. I thought about how funny she was, how quick-witted. Would we ever see that flash of humor again?

Another fear nagged us. Was she getting the best treatment in this small hospital in Mexico ? It was hard to say because our doctor only spoke halting English. When the results of the second MRI came back, the news was worse. Her brain continued to bleed and swell, and, if that trend continued, we’d have to MedVac her to another hospital in Guadalajara , though moving her could be dangerous.

We spent hours trying to find a neurosurgeon from Salt Lake who spoke Spanish and could communicate with our doctor so we could be assured she was getting the best care. When we did find one, he assured us her care was good, but they were “not as aggressive as we would be here in the States.”

At night, my husband, Scot, went back to a nearby hotel room, since there was room for only one extra person in Julie’s room, and I slept on a narrow padded slab against the wall, getting up every two hours to wake her so she wouldn’t slip off into a coma.

On that slab in the darkness, I tried to pray. You’d think at such a low ebb of desperation that you could pour your heart out to God, that words would come bubbling to the surface. Not for me. It was like the words were stuck inside of me in some paralysis of pain. It was as if they were stuck behind a dam, that if it burst I would not be able to contain my anguish and my grief would overcome and swamp me.

So, all I could say in a plaintive whisper to God was, “Help. Help. Help” repeated over and over again, my voice hoarse with pleading.

How could so many things go so wrong in my life at once? What would happen to our beautiful girl?

I found out that God does hear one-word prayers, because when I think back on my life and am filled with gratitude, those miserable days in a Mexican hospital, when I could hardly breathe for tension, are what come first to my mind.

The Lord gradually shed light into my darkened world. First, He sent his children to bless and lift us. The moment we had learned about Julie’s accident, we began to make a series of calls, finally finding the mission president, who could speak Spanish and called the nearest branch president to come quickly. Just as the ambulance arrived at the hospital, he was already there and gave her a powerful blessing in the ambulance. It was in Spanish and Julie couldn’t hear it, but the Spirit did.

The branch president and his wife came the next day with a teddy bear and treats, hoping to touch her heart with hope, and then came a few times more to make sure she was doing well.

Another member of the branch owned a lovely restaurant and motioned to us after church on Sunday, that he wanted to give us relief from our worries. He explained with a word of English here and a word there, that he would pick us up the next night and take us to his restaurant and feed us.

How can the Lord have such charitable and good children? I thought, they will never see us again. They can’t even converse with us. We can do nothing for them, but they are seeking to bless us merely because we are a brother and sister in heavy need.

These kindnesses made our days bearable. They were like a quiet touch on the shoulder from God saying, I know where you are and I haven’t forgotten you.

Julie’s third MRI yielded better news. The bleeding and swelling had stopped. After two weeks, she had begun to awaken more and speak somewhat coherently. We felt encouraged, but the tedium of the hospital coupled with the tension was terribly draining.

Then, we got a knock on the door and there stood Chris and Alison Hemming, a young couple we had never met before, brimming with happiness and vitality, who were on their honeymoon. They had been married two days before in the Oakland Temple and were on a cruise, whose first stop was Puerto Vallarta .

Now think about it, if you are on your honeymoon at your first port of call, where the tropical breezes caress the very air, what would you do with your few hours? Walk hand in hand along the beach? Share a romantic little dinner to celebrate your wedding? Wander through the shops eyeing the folk art?

Then there is always that great possibility that pops up first in any honeymooner’s mind. You could always visit the sick—somebody that you don’t know at all. Who were these two bright ones at our door? Who would consider such a thing?

They explained that Chris had been on a mission in Bolivia and told Alison so much about it, that she really wanted to see what a little branch looked like. Though it was Monday, they caught a cab and went to the church building, and who should be there but our saintly branch president.

He told them that an American girl was very sick in the hospital and the newlyweds decided that visiting her was what they wanted to do with their few free hours at this port of call.

We laughed together, talked like old friends, and I secretly marveled at how much better I felt for this outpouring of love to us from these two who didn’t know us, but chose to love us anyway.

I felt awash in gratitude for my Heavenly Father, who knew just how to send a dash of hope into a gray hospital room. I wanted to shout Hallelujah that His children who feel His light would act in such a compassionate way.

I felt—I can say it no better than this—I felt loved. I felt noticed by the Divine, acknowledged by my Creator, and encircled in the robes of His righteousness.

Later, the doctor sat at his desk and handled the scans of Julie’s brain, and said, marveling, that the patient whose brain was scanned in those pictures could not be the same patient in the hospital room, who now was talking so clearly and hadn’t apparently suffered intellectually. “Julie and this scan just don’t match up,” he said. “I just can’t understand how she can be functioning so well with this degree of brain trauma.”

Later another doctor in Salt Lake independently made the same comment. The patient and the scan don’t match. This is the scan of a very sick girl.

Still, I cannot say that life became easier. We had had a miracle, but Julie has had years of difficult symptoms from her injury. It took another ten months to sell our home in Utah , all the while we had two house payments and very little income.

But what I had experienced from the depths of our extremities was a transformation from heaviness to hope, and wretchedness to gratitude. I had felt God’s light touch upon my soul. Julie’s jokes and wit are still a regular part of my life. They were not stilled by that accident, and I will never forget that God hears one-word prayers and remembers even when I am far away.