Julie Wright is establishing herself as a modern romance writer with a sense of humor.  Most of her previous books have been directed toward the YA market, but her newest book, Cross My Heart straddles the line between YA and Adult and is particularly appealing to twenty-somethings or anyone who just enjoys a good romance.  It would make a great Christmas gift for the women on your list–or for busy shoppers who could use an enjoyable break. Though not exactly “chic lit”, Cross My Heart bears some traits with that genre from the snappy dialog to the caricature style book cover. 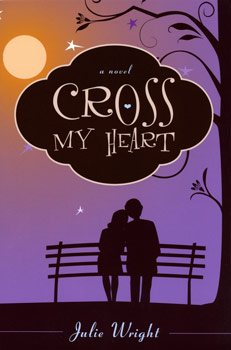 Jillian left Boston, her hometown, and accepted a job with another agency clear across the country in Los Angeles when her fiancé stole an ad jingle from her, then got the promotion that should have been hers.  She settles into her new location and even begins a serious relationship with Jack.  Unfortunately Jack is insecure and isn’t sure she’s really over Geoffrey, so he tricks her into participating in a love study at a local university.  As soon as her neurons go wild when she is shown a picture of her former fiancé, Jack calls it quits for their relationship.

More bad news comes from her obsessive/compulsive boss who informs her there are problems in their office back in Boston, so he is transferring himself and her back there to straighten out whatever is wrong.  She doesn’t want to be anywhere near Geoffrey, whom she won’t be able to avoid since they work in the same field, and she doesn’t want to be too close to her smothering parents.

She reluctantly packs her belongings and boards a flight for Boston.  When her seatmate turns out to be a dentist with a chip on his shoulder who belittles advertising, she’s ready to swear off men altogether.  She finds the apartment of her dreams though it costs more than she can afford and needs a lot of work.  She also renews some old friendships and discovers she has missed closeness with her girlfriends.

When she reports to work, it doesn’t take long until she and her boss discover someone is stealing their accounts and using insider information to do it.  All signs point to Geoffrey, making it impossible for her to avoid him and his new fiancé, Nicole, who recently dumped her dentist boyfriend.   An awkward encounter with a dog walker and her charges leaves Jillian in need of a dentist and she only knows one Dentist, Allen, who has a nearby office, but is the same person who antagonized her on her recent air flight.

There are still some sparks in old relationships, creating an awkward quadrangle, as the four attempt to untangle their relationships.  Jillian is also bent on solving her company’s problem.  As usual, her boss complicates it all by falling madly in love with a client both Geoffrey and Jillian are attempting to land for their respective firms.

The characters in Cross My Heart have enough depth to carry the story beyond the parameters of a light-hearted romance.  Though their reactions at times are a little childish, their feelings, goals, and sensitivity are mature and insightful.  The plot is a fun variation of “boy meets girl, they overcome an obstacle, and live happily ever after.”  The plot is convoluted enough to keep the reader guessing.  There’s also a great subplot dealing with friendship.

Wright married her pre-mission sweetheart whom she dear-Johnned during his mission.  When he came back home, they got together again, got married, and purchased a grocery store in a rural Utah town.  She loves to read, travel, and outdoor activities.