Three elderly sisters drive out in Utah’s West Desert to see the Sun Tunnels, an odd art formation built in the 1970s when such strange constructions were considered art.  They are almost there when they discover a body lying beside the road sans clothes.  They feel certain the unfortunate man is dead so they cover strategic places with a pillow case one of the sisters has been embroidering  and plant an umbrella over him to keep the body from deteriorating while they finish their planned expedition to see the Sun Tunnels. 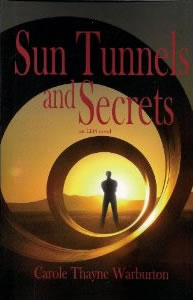 Sun Tunnels and Secrets by Carole Thayne Warburton begins with a scene both terrible and humorous as the sisters discover a body, then decide to finish their excursion, and report the body to the sheriff upon their return.  The only problem is, when they return, the body is gone and so is the car belonging to one of the sisters who left it at a crossroad before joining her sisters so they could ride together.

Tony who rescued a young woman, Kelli, from a vicious polygamist cult in a previous book by this author, is working on a large ranch in the northwest corner of Utah near the small town of Grouse Creek.  He took the job to be near Kelli, who only sees him as a friend while he is madly in love with her.  Kelli has a job counting Quail and checking their habitat.

The car thief, wearing nothing but a pillow case, shows up where Tony is working with a horse and gets the jump on him.  He trades the stolen car for Tony’s pickup truck and while he’s at it, he swipes Tony’s clothes, leaving him wearing  putrid smelling  coveralls he found in an old dugout, his hands tied, and the pillow case over his head. You might know the car thief ends up on Kelli”s doorstep.

As the sisters spend time together and with Kelli and Tony trying to solve the mystery of the “dead man” and the stolen cars, another mystery intrudes.  Norma, one of the elderly sisters, who lost her husband just a month ago discovers he was once engaged to her older sister and her sister dumped him because she learned he had fathered a child while still in high school.  Norma is no longer certain her husband had really loved her and what happened to that long ago love child of his?

Kelli and Tony have their own problems as Kelli shies away from romance and Tony prepares for an audition with a country band he has admired all of his life.  He has unresolved issues with his mother too.

Warburton gives a delightful representation of small town life in a western community located several hours from a town large enough to have its own doctor, a movie theater, or hospital.  The sisters strike a balance between true-to-life and a teensy bit overdone, but whatever, they are funny, lovable, exasperating, and stir the reader to aching compassion.

The plot is minimal, but fun and well-paced while the characters are the real story.  The love-me, love-me-not relationship between Kelli and Tony gives the story a bit of romance, but the old ladies steal the show.

The sun tunnels actually have little to do with the story beyond being the elderly sisters’ destination at the beginning of the book, though the reader might make a case for them being symbolic for seeing reality from different perspectives.  Both male and female readers will enjoy this book.  It will be of special interest to those who have a soft spot for rural life.

Warburton and her husband taught school in the little two room school in the real Grouse Creek and from that experience she has drawn much of her background for her novels.  She graduated from Utah State University and she and her husband now live in Avon, Utah.  She is an avid outdoors woman who enjoys skiing, bike riding, and hiking.