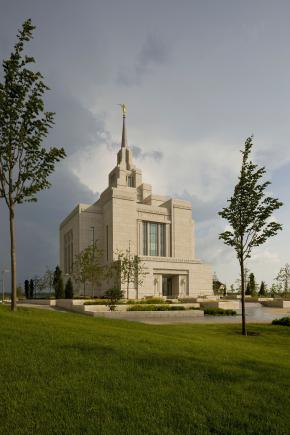 Members of The Church of Jesus Christ of Latter-day Saints  in Ukraine no longer need to travel 30 hours by bus to Freiberg, Germany, to attend the nearest temple. The Church’s first temple in the former Soviet Union was dedicated 29 August 2010 in Kyiv, Ukraine, by Church President Thomas S. Monson.

The Kyiv Ukraine Temple, which was dedicated in three sessions Sunday, is the Church’s 134th operating temple worldwide and will serve approximately 31,000 Church members living in nine European countries.
Prior to the dedication, President Monson sealed the temple cornerstone — a tradition marking the end of construction and the beginning of the sacred work inside the temple. President Dieter F. Uchtdorf, second counselor in the First Presidency, Elder Russell M. Nelson of the Quorum of the Twelve Apostles, and Elder William R. Walker of the First Quorum of Seventy also participated in the cornerstone ceremony.

A cultural celebration was held Saturday evening inside the Palats Ukraina concert hall, where performers retold the rich cultural history of the region through song and dance.

The Kyiv Ukraine Temple was announced in 1998 by President Gordon B. Hinckley, and the temple groundbreaking took place in June 2007. The Church has been established in Ukraine for nearly 20 years, and as of December 2009, there were 10,722 members in the country.