"All is Well" | Meridian Magazine 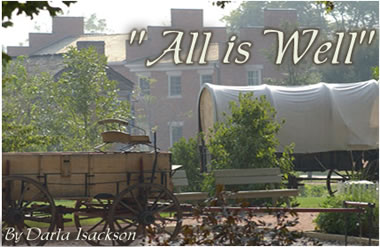 In the past few years, references to the pioneers have been frequent in Church lessons and talks. Stories of the hardships they suffered abound. Perhaps because I’ve always been a bit of wimp physically and knew I’d have made a lousy pioneer Ive occasionally gotten a bit “pioneered out” – tired of hearing how hard things were for them and how lucky we are to have so many physical comforts. However, last week pioneers became real to me all over again, and I was caught up once more in the drama of their experiences. Why? Because, after two years of planning and preparation, many of the youth in our ward, along with nearly a dozen hardy adult leaders, completed a rigorous pioneer handcart trek on part of the real Mormon Trail in Wyoming.

In Sacrament Meeting the bishop and many of the youth recounted their experiences. Several mentioned walking many dusty miles, then crossing the Sweetwater River – how the biting cold of the water felt refreshing on a hot summer day, but how frigid and frightening it would have been in the cold and snow. Our ward teenage boys carried people across the river – reminiscent of history. One reported that he thought all the while of those brave young men who carried so many weak, elderly, and frozen pioneer Saints, who never could have made it on their own, across that icy river.

The bishop told us that at one point in the trek the men were marched away – like they were for the Mormon Battalion – and had to stand at a distance and watch the women struggle alone to get the handcarts up a hill. The young men melted with compassion and wanted so much to break ranks and go help the women as they struggled and pushed and even cried. One young man broke down with emotion telling how he felt watching the women struggle – that it was only his agreement to see this through that could have kept him from running to their aid. The happy part of that story is that the young women made it up the hill! Their sense of triumph must have been tremendous. And the young men were terribly impressed that none of the women whined or complained during the whole trip!

The Value of Doing Hard Things

Earlier in my life I would have questioned the value of having young people do such hard things, but I understand now that doing hard things is a valuable way to find out what’s in us. The Lord already knows – but we don’t! Especially if life has been relatively easy, we may have no concept of what we are capable of.

In our modern “easy” life, sometimes hard things like the trek are contrived to help the youth find out what they are made up. Another example is called “Ropes Training.” I remember watching the girls I accompanied to Oakcrest Girl’s Camp struggle with this experience when I was a Young Women leader. I couldn’t imagine why they were having these girls do “Ropes Training” – it was so hard!

Challenges, such as obstacle courses, were set up to necessitate teamwork and tremendous effort. However, I saw something happen to those girls when they found out they could accomplish hard things together. They stood a little taller, smiled a little broader. Their feelings about themselves had changed because they proved to themselves and others that they had it in them to persevere and triumph.

Later I did a different Ropes Training myself, and I will never forget the feeling of triumph when my whole team made it over a 20-foot wall with no ladders, no ropes, no help except each other. We had to use ingenuity and teamwork to accomplish what appeared to be a totally impossible task. Getting the last person over was the hardest with no one left to boost her, no shoulders for her to stand on. My team came up with the solution of having the strongest man dangle me over the edge by my arms since I was both tall and light. Then the person at the bottom – a tall, athletic girl, took a running leap, and on her third try was able to run up the wall far enough to grab my feet; then she literally climbed up my body until she could reach willing arms that pulled her up the rest of the way. We all cheered, some cried, as we celebrated our success in spite of sore muscles and utter fatigue. I had a new respect for my body and for myself. I hadn’t let my team down and I didn’t think of myself as such a wimp any more.

I can’t help but think that the pioneers felt an even better kind of satisfaction at every difficult but successful mountain or river crossing. Each time they survived encounters with buffaloes, prairie fires, food shortages, or Indian attacks by pulling together and helping each other, something changed inside. A stable, sure confidence grew from triumph over difficulty.

The Reality of Limitations and God’s Help

Of course, the pioneers also became sorely aware of their own limitations and constant need for the Lord’s help. And that is the other great lesson of the pioneers – and one that was also mentioned in the Sacrament Meeting talks. They knew that many of the Pioneers had survived only because of help from the Other Side.

I’ll never forget the words of Francis Webster, a man who came across the plains in the Martin Handcart company. “Everyone of us came through with the absolute knowledge that God lives, for we became acquainted with him in our extremities.” (quoted by David O. McKay, “Pioneer Women,” Relief Society Magazine, January 1948, p.8) I suspect that the pioneers who survived sometimes kept going only because they knew the reality of God’s help and presence.

Even as death stalked their company, they knew that angels were near. I can imagine them softly singing through their tears over shallow graves of loved ones, “And should we die before our journey’s through. Happy day. All is well. We then are free from toil and sorrow too. With the just we shall dwell.” (“Come, Come Ye Saints,” Hymn 30)

Some of the young people in my ward said they sometimes felt the need for silent reverence when they were in Martin’s Cove where 56 members of the Martin Handcart Company perished from hunger and cold. They felt they were walking on sacred ground.

The Reality of Hardships and Sacrifices

The young people in my ward mentioned how much more they understood the lack of food the pioneers had when they were given a half a muffin for breakfast, how much they commiserated with the pioneers when dirt and sand was blowing in their faces. The pioneer clothing they had carped about – that covered them from head to toe – became a blessing protecting them from sunburn, thorns, and dust, and they understood why they had dressed that way.

Some of the young people said they felt the reality of the sacrifice the pioneers had made for the first time – realizing these were real people with real feelings that had struggled day after day to get to the Promised Valley.

How nothing but their faith in God and the gospel had kept them going. How angels must have helped and supported them in order for any of them to survive the intense hardships. They said they gained a greater sense of confidence that whatever comes – even death – with the Lord’s help you can handle it with faith and perseverance.

Would We Have Made It?

A great tribute was given to the bishop’s delicate-looking wife, who accompanied the youth on the trek. The bishop quoted a note he wrote to her, “I think you would have made it. If you had been a pioneer, you would have had the faith, the perseverance, the inner strength to keep going.”

He said, in closing, that the trek had made him more aware of the strength of the youth upon whose backs the leadership of the kingdom will soon rest. “These young people are built to pull,” he said. “They can do more. They can pull harder when it is necessary. We under-rate them and sometimes ask too little of them. When the circumstances require, they will come through. Raising the bar for them has been realistic. Our high expectations of them are not wrong.”

I was moved by his words and was reminded of the strength of LDS youth who withstand evil blasted at them from the media day and night, as well as the attacks from the adversary in their minds every minute, and still emerge strong and clean and determined to do what is right. God bless them! They are truly modern-day pioneers – as each of us can be by putting our all on the altar to build God’s kingdom here on earth.

In the Midst of Hurricanes, Wars, and Tragedies All is Still Well

When the pioneers came to the Salt Lake Valley in July of 1847, it was a wilderness and their very survival was constantly threatened. What is here today was built from the faith of a people who came with only what they carry in their wagons. The very fact that they succeeded is a testimony to the truthfulness of the gospel. Matthew Cowley said, “We stand today as a living evidence to the world of the divinity of the mission of the Prophet Joseph Smith. Why? Because our very presence in these mountains is a fulfillment of the predictions of that inspired man.” They faced hunger, privation, snakebite, Indian attacks and illness and injury with no medical help available – yet still sang with strong voices, “All is well, all is well.”

We face natural disasters, whirlwinds of evil, wars and rumors of wars and trials of the spirit and soul of every sort. Can we still sing with the faith of our fathers, “All is well. All is well”?

This time of year as we celebrate the entrance of the early Saints into the Salt Lake Valley, let us ponder the challenges of the pioneers and the challenges we face today. Some Church leaders have intimated that 21 st century temptations and challenges are more intense in their own way, require more inner strength, more determination to do what is right, more trust in the Lord than the challenges the pioneers faced.

We wonder if we could have passed the tests of pioneer days. They probably are wondering from the Other Side if they could pass ours. The truth is, none of could have or will without the help and support and strengthening influence of the Lord.

The words of William Clayton’s hymn speaks to the hearts of all modern-day pioneers.