Ancestors are the People of HistoryT: The Ira Allen Story | Meridian Magazine

Ancestors are the People of HistoryT: The Ira Allen Story

Ancestors are the People of HistoryT: The Ira Allen Story
By James W. Petty, AG, CG

The premise of the Ancestors are the People of HistoryT is to discover, preserve and share, through Meridian Magazine and online publication, the wonderful stories of real life ancestors and their brush with history. Many of us have common forbearers, but all too often over time, this connection to one another and history has been forgotten. We are endeavoring to collect some of the stories of these ancestors and share them with family and lovers of history. We invite you to submit the stories of your ancestry with the Meridian audience so your ancestor’s place in history and contribution will not be lost.

The following is the fourth article in our continuing series. The faith promoting story for this issue, Ancestors are the People of HistoryT: The Ira Allen Story, is shared by Richard P. Allen, a descendant of Ira Allen, one of the founders of Hyrum Utah. In this account of this early Mormon pioneer at Winter Quarters, we are given a first person autobiographical sketch of life in that very difficult time during the Mormon migration to Utah in 1846-1847. As you read Ira Allen’s experience, try to put yourself in his position. We, today, live in comfortable homes, in comparative wealth to the existence our ancestors had to endure. Their trials and tribulations serve as a wake-up call to us when we feel our own suffering is great and unbearable. Yet these people of our past pushed on and were blessed for their sufferings through their faith and obedience. May we recognize the strength and convictions of past family heroes and their devotion to family and God, and apply their courage in life, as Ira Allen did. 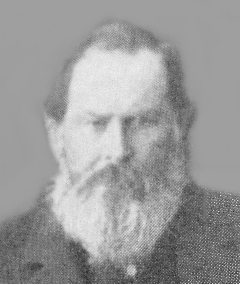 Ira Allen and his family were driven from Nauvoo by mobs in 1846, suffered with the Saints at Winter Quarters, crossed the plains in 1850, and helped found Hyrum, Utah. Ira wrote the following about his time at Winter Quarters and a surprising test of faith that he faced there:

“I arrived at Winter quarters on the 5th of Nov. 1846. I had a wife (Calista Bass) and five children, the oldest ten years old, the youngest twenty-three days. We lived on bread all winter, except a quarter of a deer. I and my children had not a boot or a shoe to our feet all winter. My wife had a pair that lasted her all winter. Toward spring our bread was getting low and I picked up an old boot somebody had thrown away with about enough upper leather to hold it to my foot, also an old shoe about three sizes too big. I wrapped my foot with a piece of horse blanket until it filled the shoe then started on foot for Fort Joseph, Missouri, 150 miles away. I then went to work baling hemp, earning twenty-one dollars and my board in twenty days.

“I could not stay longer for fear my family would be out of bread. When I got home they had had nothing but roots to eat for four days. The boys had dug ground nuts and what they called wild beans, a root that looked like beans. I had lost one of my oxen during the winter, and worked through the month of April helping fence a big field to get some plowing done. I paid for plowing ten acres and could get but one plowed, so I did not know what to do. I went to President Young and told him my circumstances and asked him if it would be all right for me to go back to the state of Connecticut. I told him I thought I could make a raise of something to help myself with. He told me to go, but the next thing was to get something to go with. I went to a man I thought had plenty of money and tried to borrow ninety dollars for three months and pay fifteen per cent interest, giving my cow and wagon for security, but I could get no money.

“Marcus Burch from St. Louis owned a store there (at Council Bluffs, Iowa). I had never spoken to him, but went in and asked him to lend me thirty dollars for three months, making him the same offer I had to the others. He asked me what I wanted it for, where I lived, and how much family I had. When I had answered his questions he thought a while, and said he was not used to doing business that way, but asked me to come back the next day and he would see what he could do about it. When I returned he went straight to the drawer, counted out thirty dollars and gave it to me. I told him to make out his security and I would put the property where he wanted it. ‘Oh,’ he said, ‘I don’t want any security. If you should get cast away I would not take it from your family.’ I gave him back three dollars for a few groceries and things for my family. He then told me if my wife wanted anything out of the store while I was gone she could send for it. When I returned she had bought three dollars worth of goods.

“The river was low and I did not get back as soon as I expected, but got into St. Louis the day the three months were up. I went to his brother’s store and asked if Marcus was up at the Bluffs and he said no, he was in town sick. I took his address and set out to find him. He appeared very glad to see me, and said he thought I had been cast away. I told him to figure up the interest on the money and I would pay it. He said, ‘Oh, I don’t want any interest. If you have any money, more than enough to take you home, leave it here and I will give you an order on the store at the Bluffs.’

President Brigham Young asks for all

“I made a raise of five hundred dollars and was going to fit out and go to Utah in 1848, but I met President Young on the street and he told me to give him every cent I had. I gave it to him, and he wanted to know how I was fitted out for staying. I told him I had one ox and a cow. He then let me have a yoke of oxen and chain. One of the oxen had been to Utah and back in 1847. I put the other with the one I had and made an outfit to come to Utah in 1850.”

According to the book, Ira Allen – Founder of Hyrum, Ira told his children many times afterward that giving up the $500 was a great trial, but that it was the only trial the gospel ever brought to him. The $500 was returned to Ira after he reached the Salt Lake Valley in the form of needed wheat and flour. It is interesting to note that of all the challenges that Ira experienced as a Mormon pioneer, the only one that he considered to be a “great trial” was a monetary sacrifice. But he had the faith to obey! We are not asked to experience the same dangers and physical challenges as the pioneers, but we are asked to give of our time and means for the gospel. Do we have the faith to obey?

Thank you, Brother Allen, for a story of courage and faith and obedience. For me, this was the wilingness to give all; and anticipating walking 150 miles, to continue on, wearing mismatched boot and shoe. Today it is a struggle if our socks aren’t the same color! To put this story in better focus, when Ira met Brigham Young on the streets of Winter Quarters it was in the latter part of 1847, and Ira was planning on joining the Saints in Utah in the following year. Brigham Young had already crossed the plains to Salt Lake City and had re-crossed the plains back again, in returning to Nebraska. Even his oxen had completed the round trip in the past six months. President Young would have been very anxious to encourage Saints to move west, but he was also extremely focused on raising funds to finance other groups preparing to cross the plains, and also to obtain goods and hardware the Church needed in their new mountain home. That Ira Allen was ready to give Brigham Young all that he had, financially as well as physically, and spiritually, illustrates the great faith and devotion Brother Allen had to the Gospel of Jesus Christ.

It is this courage and the conviction of people like Ira Allen, who teach us what we are capable of being when called upon. By following these examples we, too, can be remembered, someday, by our families as Ancestors, People of History with the faith to obey.

You can participate, too!

Each of us has had experiences or ancestors whose brush with history provides new and interesting insights and details of the past. Recording and preserving these stories are opportunities for family history work and redeeming the living and the dead. Our children will hear these accounts and hold them in their memories, and their hearts will swell with love and turn to their Fathers. Please join us in sharing how “we touch history” and participate in Ancestors are the People of HistoryT. Sit down and spend a few minutes reviewing your life and your ancestors’ experiences and choose a special story to share with us. Remember, we and our Ancestors are, literally, the People of History; only by sharing the stories that we and our ancestors have lived, will the testimonies and memories of the past be relayed to our descendants, for future generations to use and benefit from. Please send your stories to [email protected] with the subject line – APH Attention: James W. Petty, AG, CG, and we will take it from there.