We sought R.C. Willey to be a corporate sponsor of Meridian because we knew it was a company that stood for something. We were particularly impressed with Warren Buffett’s words about Bill Child, as he tells “A Managerial Story You Will Never Read Elsewhere.” 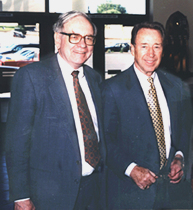 As the third richest man in America, Warren Buffet’s name often shows up in the media. The Oracle of Omaha, as he is sometimes called because of his nearly unfailing investment acumen, wouldn’t seek this attention. He prefers to be a low-key executive “in a world where CEO’s can seem as glitzy as movie stars.” Yet, reporters can’t help but be drawn to him because of his spectacularly profitable investments and a mystique that says he knows a secret something about business that’s worth finding out.

His judgment is superior, and, so much so that when he didn’t jump on the bandwagon and invest in dot.coms, it made headline business news. If Buffett didn’t invest, should the rest of us?

When the technology companies took a tumble this year, the money magazines asked, ” Is Buffett smirking? Does he feel happy?

Actually, it was neither. With his Berkshire-Hathaway investment company, he is known to be an ever-patient, value-centered investor, who has an eye for the big picture-and he must know something that works.

The Billionaire with Superior Judgment Buys a Company Closed on Sunday

Enter LDS businessman Bill Child, the head of R.C. Willey, a regional furniture store in the Mountain West. His father-in-law Rufus Call Willey started selling furniture in 1932. The day Bill graduated from college, Willey handed him the keys and told him to take over the business.

Under Child’s leadership, the business prospered, boldly advertising their practice of closing on Sunday with a jaunty jingle “Never on Sunday.”

Bill said, “Sunday closing issue is quite important to us because of religious reasons, but also we feel like the almighty dollar is becoming too important, and families are being pushed aside. Associates and employees need to spend a day with their family. If they choose not to attend religious services that’s OK, but they need to be with and do things that build the family.”

In the ’50’s, that was an easy practice to maintain, when nearly all businesses were locked and quiet on the Sabbath. Yet as time passed, Sunday became one of the prime shopping days with full parking lots at retailers and shopping malls.

Business wisdom suggested you couldn’t survive in a retail world if you were going to be closed on the biggest shopping day. Furniture stores average 26% of their sales on Sunday.

Yet Bill Child was firm on that principle. “We feel good about it, our associate love it, and we are able to get better people. We are able to regenerate our management. If I were managing a store, and it was open on Sunday, I think my share of mind would be there wondering what’s happening. “

Over the years as pressures came, Bill Child was steadfast to his principles. “Life is not all about money,” he said, and was remarkable in his ability to make his business thrive in six days of the week. 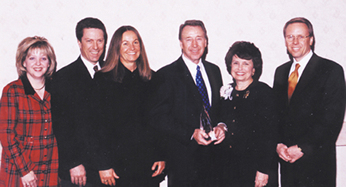 Then in 1995, Bill Child sold R.C. Willey to Warren Buffet, and the price tag included a firm stipulation that the furniture store would be closed on Sunday. Buffett owned the Nebraska Furniture Mart, whose biggest days are Sunday. That means they get 52 extra sales days a year for the cost of their overhead. Staying closed on Sunday would not have necessarily been Buffett’s idea of prudent business.

But Buffett’s business principles also meant he respected the owner’s vision of the businesses he bought. He understood that you couldn’t divorce Bill Child from his integrity and still have Bill Child. R.C. Willey had been built around an identity of standing for something, and Warren Buffett would let it stay that way.

Buffett said of the managers who run Berkshire Hathaway’s businesses, “A very high percentage of these men and women are independently wealthy, having made fortunes in the businesses that they run. They work neither because they need the money nor because they are contractually obligated to — we have no contracts at Berkshire. Rather, they work long and hard because they love their businesses. And I use the word “their” advisedly, since these managers are truly in charge — there are no show-and-tell presentations in Omaha, no budgets to be approved by headquarters, no dictums issued about capital expenditures. We simply ask our managers to run their companies as if these are the sole asset of their families and will remain so for the next century.”

As long as R.C. Willey expanded within Utah, the door was locked on Sunday, but two years ago, the company was ready to expand to Las Vegas. Bill Child arranged to fly with Buffett over the desert landscape to look at two sites. The sites were good, but Buffett was skeptical. “I don’t think we can succeed here if we’re closed on Sunday.” he said, at the same time acknowledging that R.C. Willey had to continue that policy. “Why don’t you expand some more in Utah?”

“What about Boise?” Child asked. Buffett was still skeptical.

“Then I’m going to make you a deal you can’t refuse,” said Child.

The Rest of the “Managerial Story You Will Never Read Elsewhere”

Buffett tells the rest of the story in his own words quoted in the Berkshire Hathaway annual report:

“Here’s a remarkable story from last year: It’s about R. C. Willey, Utah’s dominant home furnishing business, which Berkshire purchased from Bill Child and his family in 1995. Bill and most of his managers are Mormons, and for this reason R. C. Willey’s stores have never operated on Sunday. This is a difficult way to do business: Sunday is the favorite shopping day for many customers. Bill, nonetheless, stuck to his principles — and while doing so built his business from $250,000 of annual sales in 1954, when he took over, to $342 million in 1999.

“Bill felt that R. C. Willey could operate successfully in markets outside of Utah and in 1997 suggested that we open a store in Boise. I was highly skeptical about taking a no-Sunday policy into a new territory where we would be up against entrenched rivals open seven days a week. Nevertheless, this was Bill’s business to run. So, despite my reservations, I told him to follow both his business judgment and his religious convictions.

“Bill then insisted on a truly extraordinary proposition: He would personally buy the land and build the store — for about $9 million as it turned out — and would sell it to us at his cost if it proved to be successful. On the other hand, if sales fell short of his expectations, we could exit the business without paying Bill a cent. This outcome, of course, would leave him with a huge investment in an empty building. I told him that I appreciated his offer but felt that if Berkshire was going to get the upside it should also take the downside. Bill said nothing doing: If there was to be failure because of his religious beliefs, he wanted to take the blow personally.

“The store opened last August and immediately became a huge success. Bill thereupon turned the property over to us — including some extra land that had appreciated significantly — and we wrote him a check for his cost. And get this: Bill refused to take a dime of interest on the capital he had tied up over the two years.

“If a manager has behaved similarly at some other public corporation, I haven’t heard about it. You can understand why the opportunity to partner with people like Bill Child causes me to tap dance to work every morning.”

“For I am not ashamed of the gospel of Christ.”