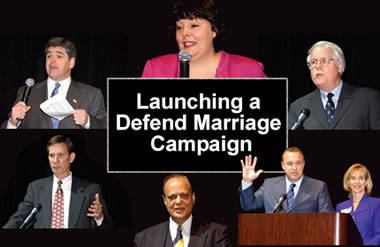 Editor’s Note:  Since saving marriage is the most critical issue of our time, Meridian will feature several excerpts from key addresses from this conference in the next few days.  Stayed tuned!  Those who would like to play a part in defending marriage can write us at [email protected] Please include your name and where you are from.

Last weekend United Families International launched a Defend Marriage and Family campaign that they hope to wage in all 50 states and on a national level.  The goal is to pass an amendment to the Constitution defining marriage as the union of a man and a woman and organize committees in each state to work to defend marriage.

Hundreds of people came to the meeting held in Mesa, Arizona where they heard Sean Hannity, syndicated radio talk show host and Fox News television commentator, tell them that there are two competing visions for America, and that the time had come to determine who will win.  In all of recorded history, every society has been based on the foundation of marriage, and now America is on the verge of a radical social experiment that will undermine our stability and our children’s future.

The timing for the conference could not have been better since last week the movement to protect marriage received its Pearl Harbor.  The bomb, which had been anticipated for months, was the ruling of the Massachusetts Supreme Judicial Court that homosexual couples have a constitutional right to marry and the ordering of the legislature to comply within 180 days.  Like that explosion which pulled the United States into World War II, this ruling is expected to finally galvanize family advocates who have been asleep while they have let society’s most bedrock institution-marriage-become endangered.

“This is a crisis,” Sheldon Kinsel said, “but the symbol in Chinese for crisis has two parts.  One side is danger, the other opportunity.”

The Massachusetts ruling not only affects the hundreds of laws concerning marriage in that state, but potentially the marriage laws of every state because of the Constitution’s Full Faith and Credit Clause which says that a legal contract recognized in one state must be recognized in all of the states. This may apply to marriage laws and will undoubtedly initiate a cascade of legal challenges to the existing marriage laws in other states.

Adding to the concern is that the Massachusetts justices relied on the reasoning used in the recent Lawrence case which overturned sodomy laws in all the states where the justices said that the Constitution protected the litigant’s own concept of existence, the meaning of life and the universe.

Ann Coulter, known as a funny, conservative pundit, told the United Families conference at a $100 a plate dinner attended by 600, that the Supreme Court justices must be hallucinating when they read the Constitution, since they see things that aren’t there in the name of forwarding their “Hustler agenda.”

UFI president Sharon Slater said that the group is launching a marriage petition that they plan to circulate widely, seeking hundreds of thousands of signatures, stating that marriage is defined as the relationship between a man and a woman.

In addition, United Families will be pushing their campaign for marriage through public service announcements, email and direct mail campaigns and through an aggressive public relations campaign putting spokesmen on radio and television stations and making them available for comment to newspapers and magazines.

“This battle for marriage will be won or lost in the media,” said Cherilyn Bacon, UFI’s director of development.  “In order to do this effectively, we will be raising $10 million dollars.”

Believing that many people do not understand the implications of the loss of marriage in our society or buy arguments based on misinformation, UFI’s goal is to educate the public.  Toward this end, they have created an issues guide which looks at myths about homosexuality often propagated in the media and replaces them with the facts found in social and scientific studies gleaned from more than 40 journals.

Is homosexuality genetic?  Is it discriminatory not to allow homosexuals to marry?  Do children fare as well when raised in a homosexual environment?  The Guide to Family Issues answers these questions, giving family advocates a ready reference for the facts they need to help spread public awareness about the issue because many have been fed a series of false impressions by the media.

UFI’s target audience will be those who believe in family but have not been engaged before in standing up for this issue.  “We want to reach the mothers and fathers who are busy at home and have not engaged themselves on this issue.  We hope to reach the moderates and independents who believe that marriage is essential but haven’t yet declared themselves and give articulation to those who do care, but don’t know the way to talk about it,” said Slater.

“We will not be using a religious or moral argument,” she said of UFI, which is non-denominational, but a social science approach.  We will not use emotion, but research.  We have gone to work not because we are against anyone, but because we are for marriage,” she said.

UFI’s purpose is summed up, “We call upon all families, responsible citizens, and government, religious and community leaders, to preserve and protect the family.  As the family goes, so goes the nation, so goes the world.”

Speakers at the conference included notables in the family movement including Richard Wilkins, Maggie Gallagher, and Allan Carlson.

Maggie Gallagher, who wrote The Case for Marriage, said, “We seem to live in a time which prompts us to ask questions that people never thought to ask for hundreds of years. Why do we have marriage? How deep is the obligation of adults to conduct their lives in ways that are often difficult in order to give their children stability within marriage?

“We can say with a good deal of confidence and with scientific certainty that every bad thing that can happen to children happens more often if parents don’t get and stay married.  Children who are raised in different circumstances have more suicide, more teen pregnancy, more early promiscuous sexual activity, more drug abuse, are less likely to graduate from high school.

“Yet four judges of the Massachusetts Supreme Court in a breathtaking judgment for its arrogance and indifference have ruled on marriage.  It is arrogant because what these four have done could rewrite all of our marriage laws.  It is ignorant because it is a decision that reflects no understanding at all about why we have marriage.

“The reason that we burden marriage with regulations and surround it with special attentions, is because it is the kind of union we depend on to make the next generation happen. Every baby deserves to start out with its own parents who love each other.  It’s hard to put sexual energies and attention into this one narrow channel particularly in large complex societies, and so we have supported marriage.

“Now your government is saying that children do not need mothers and fathers.  I don’t think we know that and I don’t think that it is true.  If we have same-sex “marriage”, it is not only going to affect those couples who do it.  It is going to affect our very capacity to talk about marriage as the lifetime union between a man and a woman in the public square.  There will be no word for it, because marriage will have come to mean something else.  The next generation will be raised with a very different definition of marriage.  We will be saying that marriage is whatever adults want it to be.”

Gallagher added, “As with most traditional assumptions, people have been inarticulate about marriage.”

United Families clearly wants to give citizens not only the articulation and understanding to stand up for marriage, but also the tools.  It will succeed with your help.

In the following days and weeks, Meridian will be publishing many talks from the conference held in Arizona.  Please stay tuned so that you may become better informed and know how to articulate this critical issue. If you want to be a part of this movement, contact us at [email protected].