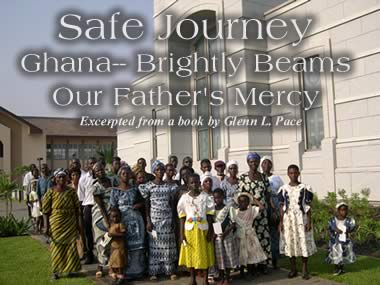 Book Excerpt from Safe Journey, An African Adventure by Glenn L. Pace. In recent days to prepare our minds and hearts for the Ghana temple dedication Meridian has run two additional articles. The first tells of the remarkable faith of the people of Ghana, and the second describes the obstacles in the path to building a temple in the land.

Meridian Magazine’s Editorial Team will be in Ghana for the temple dedication, taking you to a front row seat at this remarkable, history-making spiritual milestone. With scores of photographic images by Scot F. Proctor and personal interviews with African missionaries and Saints, you will be able to feel the energy and excitement as the light dawns in what used to be called the dark continent. See these articles next week on Meridian—reporting from Ghana.

Africa, observed Elder Glenn L. Pace, in his book Safe Journey, is a roller coaster of extremes. An innately spiritual people who need to be taught the ways of leadership. A piece of soaring good news one day about the Church’s progress with a setback the next.

As the new millennium burst upon them in Accra, Ghana, he caught himself humming:

The day dawn is breaking, the world is awaking,
The clouds of night’s darkness are fleeing away.
The worldwide commotion, from ocean to ocean,
Now heralds the time of the beautiful day.

In many a temple the Saints will assemble
And labor as saviors of dear ones away.
Then happy reunion and sweetest communion
We’ll have with our friends in the beautiful day.

“I don’t hum very often,” he said, but I had never felt more positive about our course in regard to the future temple.

“But the song in my heart was short-lived. On January 4, a rumor reached us that the temple had been rejected outright. I called my sources, who confirmed the rumor. I felt helpless. I couldn’t stop thinking about the temple but didn’t know what to do. 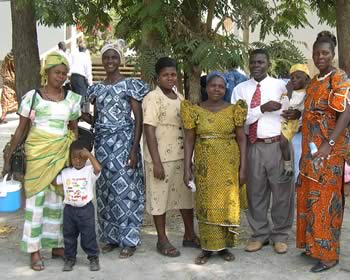 This was Elder Pace’s darkest hour of their three years of service in Africa. He received the word from President Hinckley, “Let the temple matter lay fallow for a while.”

Months of doom and gloom followed and Elder Pace worked with the African Saints to help them prepare to go the temple. Describing how the children of Israel fashioned a golden calf for themselves while Moses was in Mt. Sinai receiving the law, He warned them specifically about their “golden calves.” “Anything that keeps a member from being temple worthy is a golden calf,” he explained.

“What percentage of adults in this stake do you think will be endowed when we open the temple in Aba? [The Nigerian temple had been announced by this point.] It will be far too low because those paying a full tithing is very low. Golden calves! I continue to believe we would have a temple in Ghana right now if we had prepared ourselves better by paying our tithes and offerings. 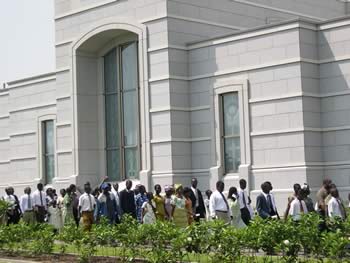 “The other day I heard a report coming from one of your stakes that many members excuse themselves from paying their tithing because ‘the Church is rich’ and the people need the money more than the Church. Golden calves!”

Elder Pace described other golden calves among the people. Marriages needed to be legalized. People needed to be honest and free from lying, stealing or cheating. Tribalism was a golden calf. In fact, he said, “This isn’t a golden calf, this is a gigantic golden bull.” Leaders in the Church he said must be “tribe blind” and turn to the Lord in making their inspired callings. 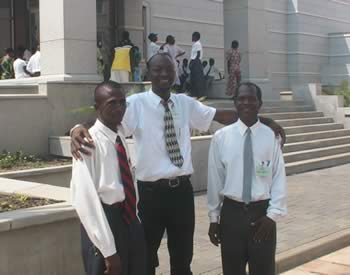 Then suddenly a burst of light came through the gloom. George Bonnet, the director of temporal affairs for the Church came with his wife to the Pace home and said “in a very somber way, ‘We’ve got a temple.’” Elder Pace said, “I thought he was talking about Aba, Nigeria, because the bids were due on the road and bridge that day. He said, ‘No, I mean we’ve got the Ghana temple.’ I waited for the punch line, which was not forthcoming. Finally, I said, ‘Are you serious?’ I soon learned that he was.”

Elder Pace wrote in his journal the next day: “I’ve tried to analyze what has happened in the last two years, but I am at a loss to explain it. I think everything that has been done with different influential people has slowly had an impact on the powers that be. All it took was one last little push, which occurred yesterday. After all the analyzing is done, I know the Lord has just taken things into his own hands and slowly and gently softened the appropriate hearts in response to the prayers of the Saints. I feel the Lord has done this because of the critical mass of Saints who have prepared to enter the temple.”

“As fate would have it,” wrote Elder Pace, “Elders Jeffrey R. Holland and Earl C. Tingey arrived on February 14 for a few days. We had already scheduled a special meeting of the Saints on February 15 in Accra so the members could hear them speak. We decided we would make the announcement about the temple to the members at that time. It seemed very fitting, since Elder Holland was in attendance in February 1998 when President Hinckley made the original announcement. Three full years had gone by.” 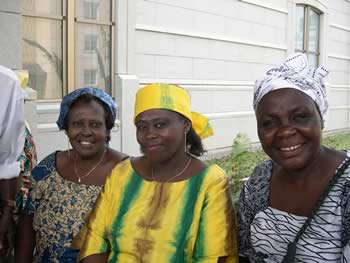 A letter announcing that approval had been granted from the Town and Country Planning Department of the Accra Metropolitan Assembly was read that night to the Saints. “The audience erupted,” wrote Elder Pace. “They stood up, applauded, and screamed. When President Sono-Koree concluded the letter, reading the words that expressed appreciation to the Lord for bringing about such a miracle, they erupted again. You would have thought we had just made a winning touchdown with one second to go. I told them we would excuse their applause and yelling in the chapel just this one time, and that brought laughter from all. As I put it in my journal, “We were all euphoric.”

The cheering, applauding Saints were not only a product of the past where the gospel had grown spontaneously even before missionaries arrived in West Africa, but a beacon for the future. Elder Pace had told them these words at the dedication of the first Church-owned building in Ghana:

“Sometime after the Savior’s plan was accepted and he was foreordained to become the Savior of the world, you stood before the Lord to get your assignment. In my mind I can hear him say, ‘We need someone to go to the earth and live in Ghana, Africa, and join the Church prior to 1978. They will be subjected to persecution for belonging to the Church. They won’t even be able to hold the priesthood at first. They will need to be true to the teachings, even though the Church won’t be organized in Ghana when they join. 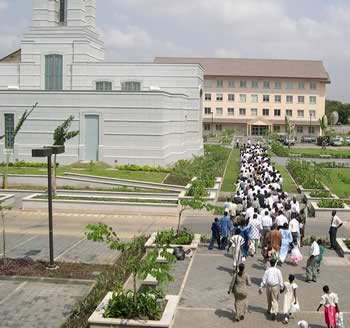 “Who here joined the Church prior to 1978? Please stand. When the Lord said, ‘Whom shall I send to Ghana?’ these people stood up and said, ‘Here am I, send me.’

“Then I think the Lord may have said, ‘I need some children to be born in Ghana who will join the Church between 1978 and 1988 and start building the Church. You will see it grow, and then at the end of time, because of some criticism about the Church, its activities will be frozen and you will need to worship for a time in your own homes. Your neighbors will think you belong to an evil church. However, you will need to be faithful and have the faith that the Church will return to Ghana.’

“Perhaps he then said, ‘We need more to join the Church between 1988 and 1998, and you will join all the others to help build the kingdom and prepare each other for a temple, which will be announced in February 1998.’

“How many have joined the Church since 1988? All members stand. And the Lord said, ‘Whom shall I send?’ and you answered, “Here am I, send me.’

“Perhaps the Lord then said, ‘During this critical time we will need some couples from the United States to leave their children and grandchildren for a few years and serve the people of Ghana.’ All missionary couples stand. The Lord said, ‘Whom shall I send?’ and you answered, ‘Here am I, send me.’”

With the dedication of the temple in Ghana, a dam will be broken which has held back not only God’s children here on earth in Africa, but a multitude in the Spirit world who have been waiting for this minute. 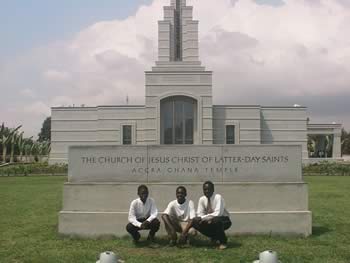