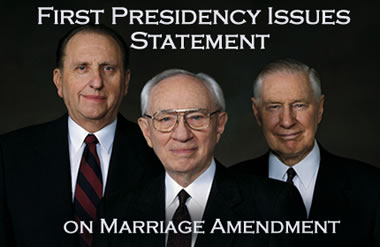 As the vote on a Federal Marriage Amendment looms in the United States Senate in the next two weeks, the First Presidency issued this statement Wednesday:

“The Church of Jesus Christ of Latter-day Saints favors a constitutional amendment preserving marriage as the lawful union of a man and a woman.”

This official stand comes just as the Senate is about to vote on the Musgrave-Allard amendment (SJR 30) which would federally ban gay marriage and free states from being required to recognize other domestic unions.  However, the Church said, “This is a statement of principle in anticipation of the expected debate over same-gender marriage. It is not an endorsement of any specific amendment.”

Sources said the Church did not want to be dragged into the debate of any particular wording in the politically charged atmosphere and that the statement of principle applied to constitutions on both the federal and state level.

A federal amendment requires two-thirds of the votes in the House and Senate before going to the states for ratification.  Then three-fourths of the states must approve of an amendment in order for it to become a part of the constitution.

Amending the U. S. Constitution, which the Church teaches was divinely inspired, is a long road.  The statement of principle gives no indication about whether the Church will play a part in that process.   Individual members of the Church are free to exercise their political right and do what they choose to do.

This is the first time that the First Presidency has issued a statement specifically supporting a constitutional amendment defining marriage, but the significant place of marriage as a union of a man and a woman is clearly defined in the Proclamation on the Family and other gospel doctrines.  In recent months, President Hinckley and President Boyd K. Packer of the Quorum of the 12 have been outspoken in comparing our times to Sodom and Gomorrah.

President Packer told the BYU J. Reuben Clark Law Society, “The world is spiraling downward at an ever-quickening pace.  I am sorry to tell you that it will not get better.  I know of nothing in the history of the Church or in the history of the world to compare with our present circumstances.  Nothing happened in Sodom and Gomorrah which exceeds the wickedness and depravity which surrounds us now…The first line of defense—the home—is crumbling.  Surely you can see what the adversary is about.  We are exactly where the prophets warned we would be (Devotional, 28 February 2004).

Church sources said it was fair to say the matter of a marriage amendment has caused the First Presidency and individual members of the 12 tremendous concern and has been discussed at very great length.  Issuing the statement as a matter of principle is an indication that the Church opposes the idea of same-sex marriage very strongly, but wants to take the moral high ground in the specifics of the debate.

The statement is based on the importance of supporting marriage between a man and a woman and is not meant to be strident or vitriolic toward the homosexual community.

On the same day the First Presidency issued their statement, the ACLU sued the city of Baltimore and four Maryland counties for the right of same-sex couples to marry.