"We are One, Big Family" The Finnish Temple Cultural Celebration | Meridian Magazine

“We are One, Big Family” The Finnish Temple Cultural Celebration 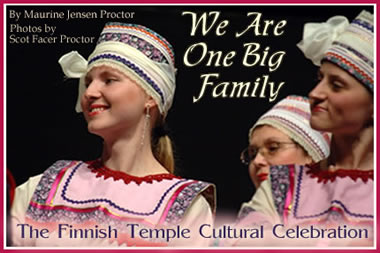 Editors’ note: Most of the pictures throughout this article (all parts) are not captioned with the names of the performers. Can you, the readers, help us caption each picture by identifying each person with a correct spelling of their names and where they are from (branch, ward, and/or district or stake)?

Please be sure and tell us the exact person you are talking about by saying where they are in the picture (example: third person from the left with the red flower in her hair) and the exact picture to which you are referring—each picture is numbered. Send all caption helps to [email protected] and we will update the articles every few days as we receive the needed information. When you see someone you know — contact them and let them know they’re being featured on Meridian Magazine!

It would be tempting if you were seventeen years old, and the only girl your age in your ward in Kouvola, Finland — and maybe the only LDS girl in your city and in all the cities round about, to think you were all alone — isolated by miles of forest and a world of values very different from your own… 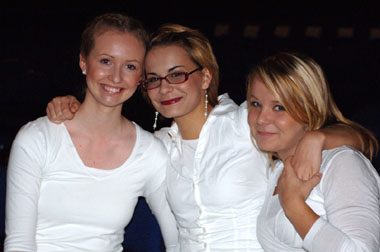 Yet, in the LansiAuto Areena just before the Youth Cultural Celebration for the Finland Temple dedication, Taina Suurinkerainen is huddled, giggling, with two of her best friends, Riikka Ylimaula and Marit Kenppainen, who live 130 miles away in Espoo, a suburb of Helsinki. 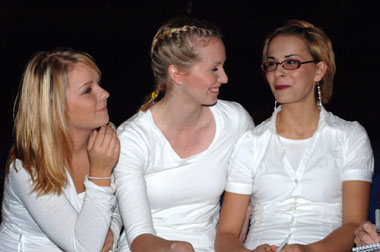 You would think they got to do this every day. This tight bond, however, has grown through the inspiration of Church leaders who consciously plan activities to nurture the rising generation — events like FestiNord — a once a year gathering of all the LDS youth in the northern countries. They say that once they have met each other, they stay in touch with youth in Sweden, Norway, Finland and beyond, via Internet messaging programs. 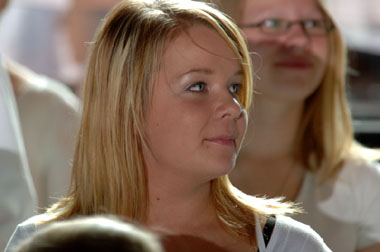 All, Nordic blonde and beautiful, dressed in white, they are confident, friendly, the picture of vibrancy, and looking forward to playing their roles tonight. 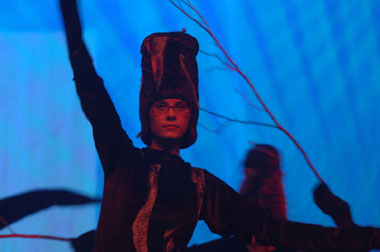 Each will be a tree in a Finnish forest. It wasn’t too hard to learn our parts, they laughed in their perfectly-mastered English.

Tying Their Hearts to the Temple

When President Gordon B. Hinckley asked that youth cultural celebrations be part of all future temple dedications, he hoped that working hard to create these festive events would connect the members — and particularly the youth — to the temple, tie their hearts to the House of the Lord. 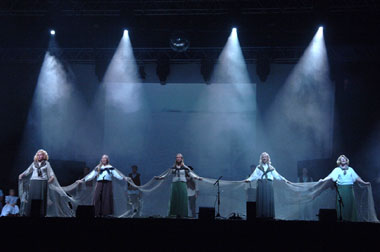 Yet, these celebrations have done something else as well. They have given members a sense of being a part of something big, that the Church isn’t just an isolated few members in a branch in Lithuania or a leased building in Moscow.

Members come together and feel the strength of their numbers, the power of shared testimony, a strong sense of community. 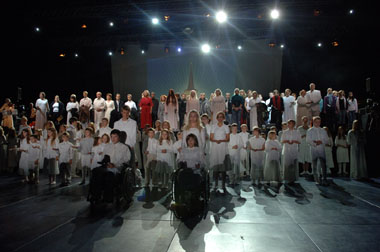 It is something wonderful to walk into the biggest arena in Sacramento or San Antonio and realize that the thousands of people gathered here are all members of the Church, their eyes singled on the temple. It is downright astounding to do the same thing in Finland, where there’s never been anything quite like this before.

The Saturday morning before the celebration that night, young Latter-day Saints, most in the bright costume of their own nation, gathered from every country in the Finnish Temple district. Russians came with boys in soldier uniforms and girls in bright blouses that made them look like nesting dolls. 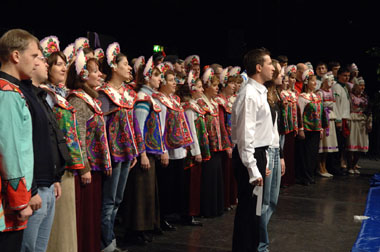 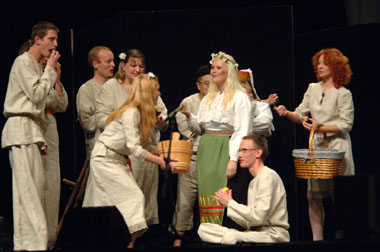 Most from the various countries had not seen each other before; most couldn’t converse in the same tongue, but they would do a dress rehearsal in one day that had been in the preparation for a year and perform it that night to a rousing applause.