LDS Fiction: FALLING is Another Score from Favorite Utah Author 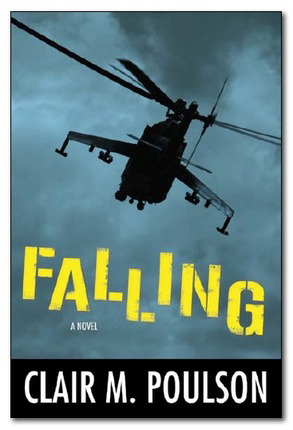 Clair M. Poulson, a favorite Utah author, scores again with his newest release, Falling, the story of a military Special Forces veteran who loses his fianc in combat, returns to civilian life, and eventually begins both a private investigator business and a helicopter service in Moab, Utah.

On what should have been a routine flight carrying oil workers from the rig where they work back to Moab, one of Corbin Daniels’s passengers spots a body on the ground. He lands to investigate and becomes convinced the man is a homicide victim, then calls the sheriff.

The sheriff isn’t what he expected. Sheriff Lisette Statton is an attractive woman and the deputy who accompanies her is an exceptionally beautiful young woman. It doesn’t take long to convince him they are both more than competent law officers as well.

Lisette is shocked to discover she knows the victim who turns out to be her opponent in the previous election. Corbin also gets a surprise when he is hired by the victim’s daughter to find out if her brother played a part in their father’s death. As the former military Major and the sheriff join forces to solve the murder, they run afoul of a hate group who hypocritically work to destroy the oil industry while driving vehicles, helicopters, and air planes fueled by gasoline. Murder and attempted murders occur at an alarming rate, keeping Corbin and Lisette hopping from one crime scene to another and sends Corbin on a multiple state search for answers. There’s a strong attraction between the two, but the demands of their jobs leave them little time to explore their feelings, especially when someone is determined to kill Corbin and destroy his helicopter.

Major Corbin Daniels is much like the law officers and investigators that have peopled Poulson’s previous books with one major exception. He’s not as particular about following the letter of the law when he questions suspects, but in being a PI instead of a lawman he doesn’t have to be. Corbin is very much a western man and a bit of a maverick. Lisette and her deputy , Jarbi, are strong women who do whatever they have to in order to get the job done. The women in this story are far from the wilting daisies who need a man’s protection, though they’re certainly given the respectful courtesies generally accorded western women by their men.

The background is painted vividly by Poulson and is a vital element of the story. He draws in the conflict between mostly out-of-state environmentalists and local natives along with the clash between good jobs in the oil industry and the limited tourist oriented jobs. He adds in the physical background of a small town and small town politics balancing between deep canyons and arid desolate stretches of desert. He portrays well the conflict between federal and local control of Utah lands.

Clair M. Poulson is a native of Duchesne, Utah. He has served for forty years in the criminal Justice system. He began his law enforcement career as an MP. He spent eight years as the Duchesne County Sheriff, and for the past twenty plus years he has served as a justice court judge. He has also served on many boards and councils. Along with serving as a justice court judge, he farms, ranches, and helps out in his son’s grocery store. He and his wife, Ruth, are the parents of five children.