Jill finds herself sitting in the tearoom of a hotel frequented by tourists in Rhodesia (now Zimbabwe), feeling dizzy and disoriented. She has no idea how she got there or what is wrong with her. In fact she doesn’t even know who she is. 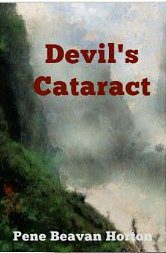 Devil’s Cataract, a Romantic Suspense novel by Pene Beaven Horton begins with a small native boy searching for the family cow and discovering a nasty surprise. It then jumps to the main story of a young woman, Jill, who witnesses a murder, then in her attempt to leave the area where the murder takes place, unwittingly attracts the attention of the murderer.   In her frantic effort to escape being killed too, she is forced off the road and suffers a head injury.

An attractive middle-aged woman rescues Jill from the hotel and takes her to her lovely rural home. There she finds herself falling for the woman’s son until bits of memory return and she begins to suspect her hostess and the handsome son, Derek, have an ulterior motive for rescuing her and that Derek’s missing wife hasn’t really returned to Canada. She suspects her own life is in danger and the only person she can turn to is Derek’s friend, Jon, who dismisses her fears as symptoms of her amnesia.

This book touches on several forms of mental illness, making it a fascinating look at the reasoning and functionality of people with mental problems that are not openly obvious. Set in the 1950s the racial bigotry is appalling and highlights the injustice directed toward the Rhodesian natives and the indifference of the white population to their plight. It also portrays white landowners who are kind and caring, but somewhat patronizing as they treat their black employees almost as children.

The background and setting for this story shows a rich, lush land with steep mountains and deep gullies that feels authentic and inviting. The characters are a little stylized, but not annoyingly so as is often the case with African/European stories. Jill has a strong sense of survival, but occasionally suffers from the dumb heroine complex and Jon is a little naive. The story is plotted well and keeps the reader turning pages.