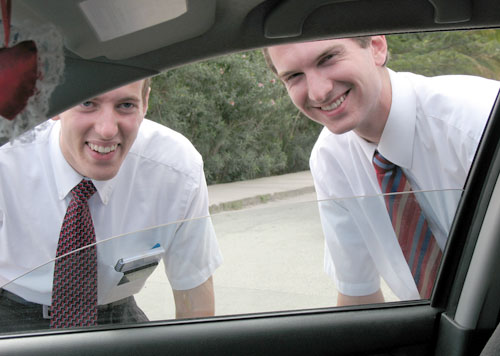 I was raised in a religious home. We were Protestant for most of my upbringing, and my mother made sure I was baptized, went to Sunday School and knew about Jesus. My father worked for the State Department so I grew up moving every 2 or 3 years until we returned to the states when I was 14. Moving back to the States was difficult for me. I didn’t fit in with the other kids in my school because I didn’t dress like the others and I had a bit of an accent. My parents divorced two years later.

With my dad gone and my mom working to support two kids, I had plenty of time to get into trouble and I did. I found myself on a path that would lead me through much heartbreak and suffering, filled with alcohol, drugs and the side effects of both. Every mistake was another weight on my conscience and a burden on my soul. Every sin was hidden away like a child hiding the broken pieces of mom’s favorite vase under their bed. I tried the best I could to get myself on track. I quit the drugs, got married, but then divorced. I found a good job and tried to raise my three children on my own. I tried to make things better for me and the kids and tried to become a good Christian. I took the kids to church, many different churches.

Just before Christmas several years ago, I was driving home after work with a car full of screaming kids and a head full of worries. As I was driving down my street I saw the Mormon missionaries walking down my street. The elders were quickly approaching my driveway. I felt a strange sense of calm descend over me. The clamor of the kids and the chaos of my thoughts were stilled for the moment.

As I pulled into my driveway, I was propelled out of my car by an unseen force and sent into the path of the missionaries walking briskly down the street. I took them by surprise because the look in their eyes was one of questioning disbelief.  They wondered what I was going to do or say next. Usually they run up to people, not the other way around.  I introduced myself and asked if we could set up an appointment for early the next week so they could teach me. With a great sigh of relief, they gave me a Book of Mormon and appointment card, and continued on their way.

That moment when the spirit moved me out of the car and into the path of Elder King and Elder Van Wagoner was the beginning of the most important period of my life. The first meeting was interesting. We sat down at the dining room table and opened with a prayer. We started talking and of course I was hesitant, not sure if I had made a mistake inviting them in my home. At the end of the meeting they asked me to read and pray about it. I said I would think about it.

I honestly was afraid that I would be praying to a different God than my own. After they left I sat down on my couch and read for a while. And then I prayed. As I prayed, I received my answer. It wasn’t anything that I could ignore. It was actually so strong that I jumped off my couch and dropped my Book of Mormon to the floor. I knew that that I was praying to my God and their God, the one and only true God, and that He was pleased with the path I was taking.

The following meetings were much easier for the elders, as I couldn’t get enough of the Book of Mormon. I loved the lessons. Every topic they brought up to talk about was an idea that I already believed to be true. It was amazing to me that I would have a question and I would pick up the Book of Mormon and read and in no time at all my question was answered. I started attending church, apprehensive at first, but once I saw the glow on the members faces, the true happiness that radiates from within and felt the Spirit that permeates the church, I knew I was home.

We started preparing for my baptism. I had never prayed on my knees, and had never brought all my sins out into the light of day much like the little child I had put those pieces of the broken vase away into a very dark place and tried to ignore them. Pride had ruled my life.  I fell to my knees to ask forgiveness for my long list of transgressions. I humbled myself, acknowledged my broken heart and allowed myself to express my contrite spirit. The catharsis was immediate and amazing. I couldn’t stop crying, my spirit felt lighter and my soul felt free. I had never known forgiveness or love like I felt that night.

On the day of my baptism, I was so happy, pretty much the entire ward turned out to support me and my two children. The little ones went first, and then it was my turn. I know I was only under the water for a few seconds, but it felt much longer. I had time to think while I was under. I took note of the silence, the peace and the warmth. When I came up out of the water, I remember thinking wait, not yet! I felt so happy. I felt all the weight that I had been carrying around for all those years lifted off my shoulders.

After the baptism came the confirmation. The Gift of the Holy Spirit was bestowed upon me. For the next several weeks I felt the spirit so strongly it felt as though I was a walking roman candle. The Holy Spirit was flowing through my body in such a way that it felt like it was exploding out of every pore of my body in an attempt to blanket the earth. My heart was so full of joy that it felt like it had grown and did not fit in my chest anymore. I couldn’t stop smiling, all my worries melted away as my thoughts were focused on the gospel and guided by the spirit.

Even the worst day at work or chores didn’t seem as daunting anymore. Where my usual commute to work had been spent fretting over upcoming tasks, unfinished chores and the insanity of traffic, now I was singing praises to Heavenly Father, contemplating gospel topics and still getting to work on time without the usual stress.  Several years ago my life was a roller coaster and my mantra was that one day things will get better.  Not even in my wildest dreams could I have imagined how much better, and they continue to get better every day!

Thank you! This is so beautiful, it brought tears.

Thank you, Bro. Albright , for sharing this beautiful story. My own 'conversion' story is not at all like hers, except for one thing: after close to 50 years of marriage to a non-Mormon, I'm now faced with difficult decision: divorce, or endure. I find myself choosing Church membership and attendance over all else. I know I have parents in Heaven waiting for ME, Mom appeared to me a few months ago, and literally saved me from a self-inflicted death. Thank you, again.