Hundreds of thousands of women, young women and girls 8 years old and above gathered around the world on Saturday, 29 March 2014, for the inaugural general women’s meeting of The Church of Jesus Christ of Latter-day Saints. Women leaders of the Church’s worldwide auxiliary organizations that have responsibility for the children (Primary), teenage girls (Young Women) and adult women (Relief Society) hosted the gathering at the Conference Center in Salt Lake City, Utah. It was broadcast live in 55 languages to Latter-day Saint chapels, on television and radio and over the Internet. 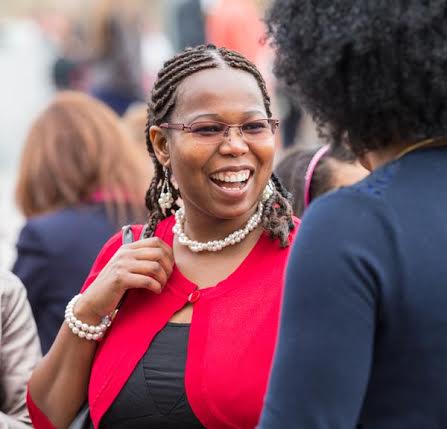 The new combined meeting will be held twice a year and replaces the two separate general Relief Society and Young Women meetings that were held annually. The speakers were the presidents of the women’s auxiliary organizations, including Sister Linda K. Burton, Relief Society general president; Sister Bonnie L. Oscarson, Young Women general president; and Sister Rosemary M. Wixom, Primary general president. President Henry B. Eyring, first counselor in the First Presidency, also addressed the women and girls. One of the prayers was offered by a 12-year-old girl. 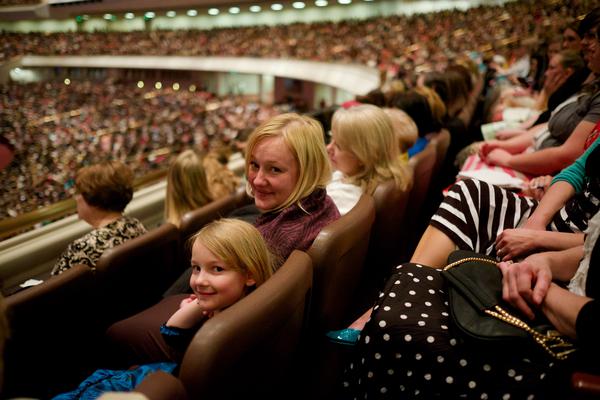 Women leaders say there is strength in gathering, and the semiannual general women’s meeting is designed to provide instruction and inspiration for the women and youth.

“We are daughters of our Heavenly Father,” said Sister Wixom. “We are covenant-making women of all ages walking the path of mortality back to His presence. Keeping covenants protects us, prepares us and empowers us. 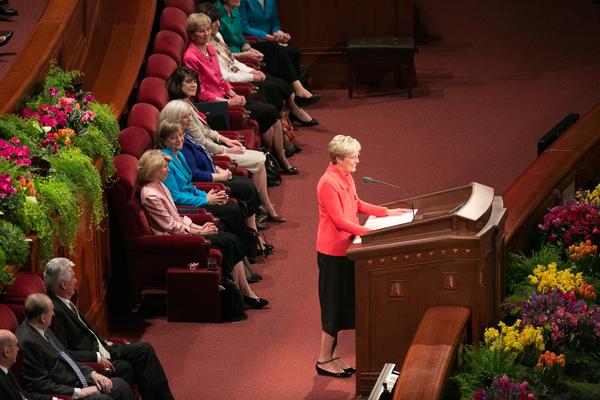 “As women of all ages we walk in His light,” explained Sister Wixom. “Our journey on the path is personal and well lit with the Savior’s love. We enter the gate to the path of eternal life with the ordinance and covenant of baptism, and then we receive the gift of the Holy Ghost.” 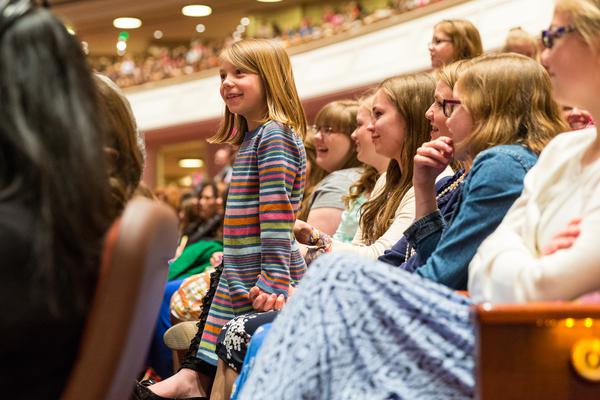 Sister Wixom invited the girls in the audience at the Conference Center and throughout the world to participate in the meeting by standing to sing “Teach Me to Walk in the Light,” a favorite song sung by children in the Primary organization of the Church. 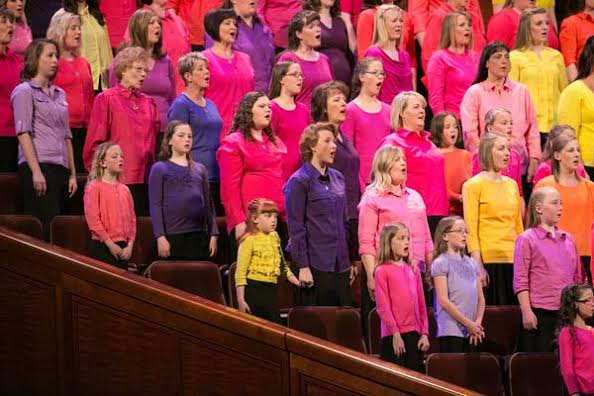 A video featuring footage of women and children in eight countries and speaking nine languages was played during the broadcast. “The combined power of our testimonies and faith in Jesus Christ surely constitutes one of the most faith-filled and powerful assemblies of women in the history of the Church, if not the world,” said Sister Oscarson. “Though in many ways we are different and unique, we also acknowledge that we are all daughters of the same Heavenly Father, which makes us sisters. 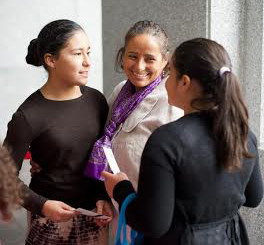 “The adversary would have us be critical or judgmental of one another,” said Sister Oscarson. “He wants us to concentrate on our differences and compare ourselves to one another. We are members of the Lord’s Church, and regardless of our individual circumstances, we can all enjoy the full blessings of priesthood power through keeping the covenants we have made at baptism and in the temple.” 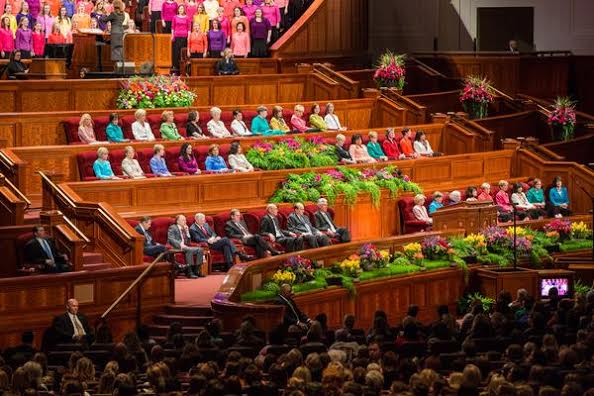 “As true disciples, may we offer our willing hearts and our helping hands to hasten His work,” said Sister Burton. “I love the women of the Church. I have seen your strength. I have seen your faith. You have something to give and are willing to give it. You do this without fanfare or publicity, drawing attention to the God you worship, not yourselves, and with no thought of what you will receive. 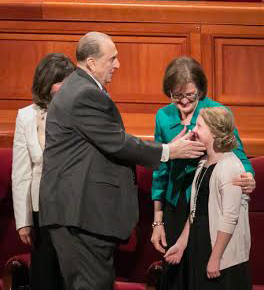 “The best way to strengthen a home, current or future, is to keep covenants, promises we’ve made to each other and to God,” admonished Sister Burton. 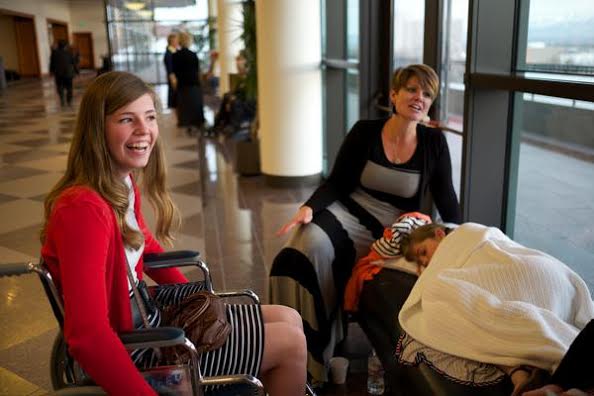 President Eyring spoke about the joy of making and keeping sacred covenants with God. “Heavenly Father smiles on you as well whenever He sees you help a daughter of His move along the covenant path toward eternal life,” he said. “And He is pleased every time you try to choose the right. He sees not only what you are but what you may become. 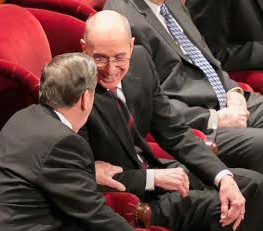 “While Satan may be attacking sisters at earlier ages, the Lord is lifting sisters to higher and higher levels of spirituality,” added President Eyring, who talked about the role his mother played in his baptism.  “I can remember the feeling of joy and gratitude as I sat behind my mother on the drive home after my baptism in Philadelphia, Pennsylvania. My mother was the one who had carefully prepared me for making that covenant and for all others that would follow.” 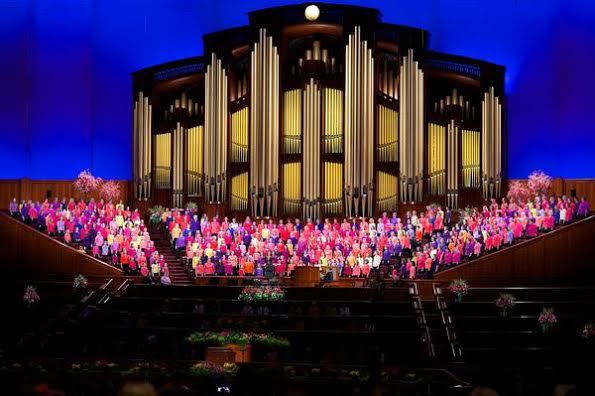 A 360-member female choir, comprised of women and girls from 8 years old to 80, performed during the meeting. Many of the women and girls had family connections in the choir, including mothers, daughters and granddaughters.The Church received 12,000 applications for the choir’s limited seats.

Church leaders encouraged the women to share their favorite messages from the women’s meeting with their families and friends on their social media channels such as Facebook, Twitter and Pinterest.The hashtag for the general women’s meeting is #womensmeeting. 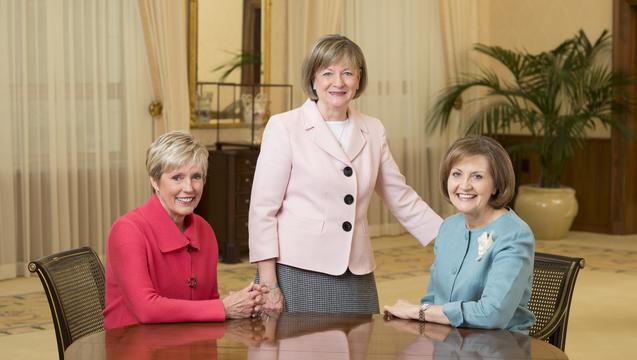