Missionary Moment: “I am Already Reading that Book! (Brazil) 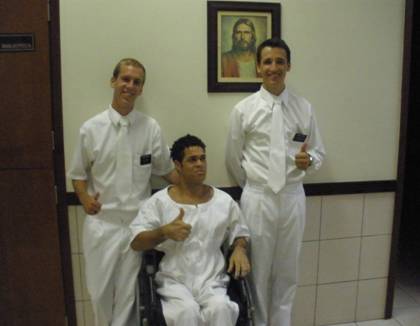 Every six weeks the life of a missionary is filled with excitement and anxiety because of transfers. During transfer week, the mission president decides if a companionship will continue on together or separate. Transfer meeting had just ended and I had received a new companion named Elder Tarbet. I already knew this missionary from other areas, so we were both excited when we were assigned to serve together in a companionship. In our excitement we decided that we wanted to try and find someone unique to baptize during our time together before the next transfer meeting.

The next morning we set a goal to find and baptize someone who was unique in some apparent way.  We even prayed for divine guidance as we commenced our search. As we were walking through the busy streets of Salvador Brazil, we saw a man in a wheelchair. As we approached closer, we saw a gruff looking man with no shirt and a large tattoo of a shark emblazoned across his chest.

We approached him to strike up a conversation and it quickly became apparent that he did not want anything to do with us or with the church. However, because of our goal to baptize someone different or unique in some apparent way, we were very persistent in trying to make an appointment with this unlikely candidate for baptism. In spite of his tough outward appearance and behavior, we still felt that he had been placed before us by divine intervention.

Eventually, after repeated attempts, the young man finally relented and told us that his name was Adinorman.  He hesitatingly gave us his address and we set an appointment for the following day. The next morning we went to try and find Adinorman’s apartment (not an easy task in Brazil) and it was nowhere to be found. The house number didn’t exist so we asked people in the neighborhood and they did not know where he lived either.  As we looked to the general area of where his apartment should have been located, we saw a small alley about shoulder width that stretched back for over 40 feet. We didn’t think that it was possible for a man with a physical handicap and wheelchair to go through it, but we decided to go check out this apparent dead end.

At the end of the alley we were surprised to find a small apartment.  We knocked and were soon greeted by the man who we were searching for!  As we entered into his small dwelling there were no chairs, so my companion and I sat down on the ground. The apartment was dark and damp, with a tiny kitchen, and a small bathroom. My companion and I began to teach about the restoration of the gospel through Joseph Smith. It soon became obvious that our investigator was not paying much attention. However, his lack of focus changed completely when my companion presented him with a copy of the Book of Mormon.

As my companion pulled the blue book out of his backpack, Adinorman immediately leaned forward and smiled. He told us excitedly,  “I have already read most of this book! In fact, I am halfway through the Book of Alma right now!”  My companion and I were in shock, and the only words that we could muster out were, “That’s awesome!”  He then explained to us that some 18 months prior to our encounter, two other LDS missionaries had given him a copy of the Book of Mormon.  He was not interested at the time, so he set it aside and forgot all about it. He had not made the connection that the book was from the LDS church.

Six months after he received the Book of Mormon, he accidentally fell out of a tall coconut tree and broke his back, leaving him paralyzed from the waist down. Because he had nothing else to read during his long recovery, he started to read the Book of Mormon he found on his shelf.  He did not understand what it was or what church published it. When he realized we were from the church that published this sacred book of scripture that he enjoyed so much, he suddenly became very interested in our message. As we continued to teach this special man, he quickly gained a testimony of the gospel and was baptized just three weeks later.  The tough guy personality melted away as his heart softened.

The miracle of how we found Adinorman, while he was studying the Book of Mormon without knowing what church it came from, shows how God prepares people to receive the gospel.  It is yet another testament that God will lead the missionaries to those He is preparing to receive the gospel in one way or another.

What a testimony that the Lord truly knows us all personally and will guide those who are searching, whether it is the missionaries or the potential investigator, they are brought together by the Lord. Love this story - it lifted my heart and made me smile with delight! Thank you, Elder Ricker