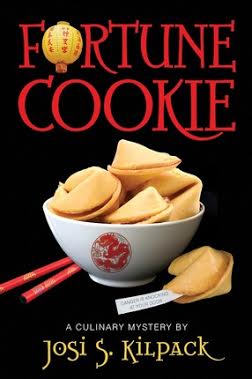 With just three weeks until her marriage to the former police detective, Pete Cunningham, Sadie Hoffmiller receives notice of her estranged older sister’s death under questionable circumstances. Josi S. Kilpack loses no time jumping into the ambiguous questions surrounding a death that may or may not be murder in Fortune Cookie, the eleventh book in her culinary mystery series.

There will be one more book in this series, (Wedding Cake coming fall 2014) and admittedly a twelve book series sounds pretty daunting for most readers, but this series isn’t the kind of series that leaves the reader hanging at the end of each volume and feeling annoyed waiting for the next portion of the story. Each book is self-contained with the story wrapped up at the end. Even the romance portion presents a problem and resolves it within one book. The connecting link between books is Sadie Hoffmiller, a middle-aged widow, who stumbles into one mystery after another and her slowly evolving relationship with Pete and their respective children. We also see a gradual evolution of Sadie as an annoying, nosy neighbor to a qualified and thoughtful investigator. Each book also shares a dozen or so recipes collected by the food connoisseur Sadie. There’s also a lingering death threat against Sadie that receives an occasional mention. All in all, a reader can jump in anywhere to read, one, a couple, or all of the books in the series. I’ve read them all, except the final one which isn’t yet available, and have enjoyed each, though I have my favorites. Pumpkin Roll stands out and so does Fortune Cookie.

Wendy, Sadie’s older sister by five years, caused Sadie a great deal of stress when they were children. She delighted in getting Sadie in trouble or causing her emotional or physical pain. When she left home at seventeen, it was a relief to Sadie and their younger brother, Jack, but it was a heavy financial and emotional drain for their parents as she only contacted them when she faced some emergency that required cash. They never even learned they had a grandson, Ji, until he was three years old. They were never allowed to meet him.

Though doused in synthetic kerosene and set afire, Wendy’s death had nothing to do with the fire. She’d already been dead for a month before her body was burned in her apartment’s bathtub. Sadie and Pete travel to San Francisco to help Ji close out his mother’s apartment and Sadie learns her nephew had a miserable childhood, was abandoned at an early age by his mother and father, and that his anger extends to all of his mother’s family because they never rescued him from the nightmare that was his life. His major loyalty is to a foster father who taught him to work and left his restaurant to his only daughter and Ji, who married and now have three daughters.

Suspects are plentiful. There’s Ji and his family, Wendy’s ex-husbands, her landlord, a few strange tenants in her apartment complex, and almost everyone Wendy had anything to do with who had also been hurt by her. They all fall under suspicion. Sadie suspects her sister was mentally ill. Either that or she was just mean. Because of her own childhood memories and the years they were apart, she knows nothing of her sister’s life, making finding out about Wendy’s life Sadie’s major goal, along with establishing a relationship with her nephew and his family. Solving the murder will hopefully be her ticket to achieving those goals.

Pete and his first wife spent their honeymoon in San Francisco and returned on their anniversaries as often as possible. Visiting the city again brings back haunting memories for him and creates awkward moments between him and Sadie, leaving her wondering if he’s really ready to remarry.

Kilpack’s characters are memorable and distinctive. Their self discovery is sometimes poignant and sometimes humorous, but always thought provoking and realistic. The plot is challenging and not easily deciphered in advance. Background and settings are smoothly blended into the story and this reader found the ending left me both satisfied and eager to read the next volume.

Josi S. Kilpack lives with her husband and children in northern Utah. She is the author of twenty published novels, a frequent award nominee, and winner of the 2007 Whitney Award in the Mystery/Suspense category.