Illustrated History of the Church From an Outside View | Meridian Magazine

Illustrated History of the Church From an Outside View 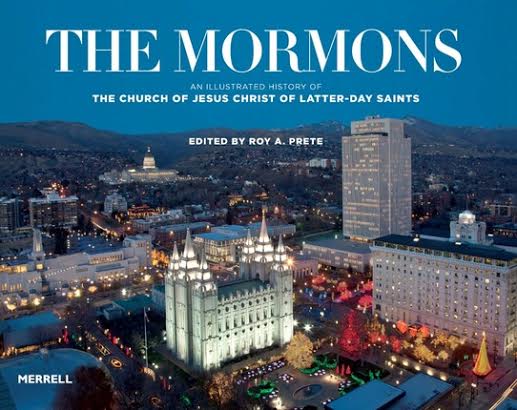 I review fiction, fiction meant for adults who want a well-written story without smut, porn, foul language, or false doctrine. Occasionally I’m asked to review a non-fiction book and up until now I’ve always said no. Then a short time ago a New York/London based publisher, Merrell Publishers, sent me a book that whet my curiosity since it’s titled, The Mormons, an illustrated History of The Church of Jesus Christ of Latter-Day Saints and it’s not published by an LDS publishing house. Many authors and photographers were involved in this publication which was edited by Roy A. Prete. After giving it some thought, I decided to attempt a review of it.

Acknowledging that in recent years a number of major events have brought attention to the “Mormon” church around the world and awakened both curiosity and misunderstandings, this editorial group decided there was only one way to answer people’s questions and correct faulty understandings, ask the Mormons themselves. They found “Mormons are ordinary people, found everywhere in the world where there is religious freedom.” They also found The Church of Jesus Christ of Latter-day Saints (Mormons) is the fourth largest religion in the United States and that nearly 60 percent of the more than 14 million members live outside the United States.

The book is divided into fourteen chapters dealing with various phases of the church’s people, customs, and beliefs. It begins with “A Visit to Temple Square”. This chapter focuses on the different buildings that make up the square such as the Salt Lake Temple, the Conference Center, Assembly Hall, the tabernacle with its organ and the world famous Tabernacle Choir, the Visitor’s Center, and the Joseph Smith Memorial Building. Lloyd D. Newell provides a history of these buildings and an explanation of their uses. Beautiful photographs from various sources identify each building.

Craig J. Ostler and John P. Livingstone pick up the narration in describing “Salt Lake City and Utah.” They speak of the city’s unique position as the “Crossroads of the West” and the role geography and the desert-to-mountain terrain played in the state’s history, Brigham Young’s role as a colonizer, the many national and state parks along with the ski industry that have made tourism a significant factor in the state, and give the reader a glimpse through incredible photographs of the diverse scenery and outdoor recreation available in Utah.

Susan Easton Black recounts the story of “Joseph Smith and the Restoration.” She is followed by Brent L. Top who explains the Church’s doctrine concerning “Jesus Christ and the Plan of Salvation.” Both are written in a plain, easy-to-understand style.

Members of the Church of Jesus Christ of Latter-day Saints share with other Christians the firm belief that the Bible is the word of God. Members belief in other scriptures such as the Book of Mormon which is often misunderstood. John W. Welch clarifies that church members’ belief in this book is in addition to, not instead of, the Bible. He also explains the origins of The Book of Mormon, Doctrine and Covenants, and the Pearl of Great Price.

The writers strike a comfortable level between conversational and scholarly text while covering the comprehensive facets of the Church. The art work does a magnificent job of telling the story of a unique people, their history, the practical aspects of their religion, the prominent role the Church plays in dealing with natural disasters and Mormons’ commitment to families. Anyone reading this book will have a better understanding of what being a Mormon means and of the beliefs of members of the Church of Jesus Christ of Latter-day Saints’ faith in Jesus Christ.

Short bios of the contributors, an index, and image credits are included in the book. Though not a publication of the Church of Jesus Christ of Latter-day Saints, it is carefully researched and documented and would serve well to introduce the “Mormon” church to those who want to learn about it or as a beautifully illustrated reminder of our heritage.

THE MORMONS – AN ILLUSTRATED HISTORY OF THE CHURCH OF JESUS CHRIST OF LATTER-DAY SAINTS, edited by Roy A. Prete, published by Merrell Publishing, 160 pages, hardcover, $34.95

This is a beautiful book. I bought one for each of my kids afer I had one so they will enjoy it. The pictures and descriptions are very well done. I recommend it to everyone.