Lumps Of Coal For Christmas 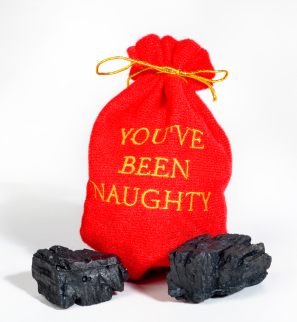 “If you’re not good, Santa will bring you a lump of coal in your stocking instead of presents,” my older brother explained to me when I was about five years old.

I remember the fear that flooded my heart when I thought of waking up Christmas morning and finding out that my surprise gift from the Christmas visitor was nothing but a lump of coal. I have to admit it made sense that if you didn’t choose good, you could get a bad consequence. But, at the same time I just couldn’t believe that this kind person, who gave to people all over the world just because he loved them would, on his special night, punish one little girl and reward all the other little girls. Nonetheless I still tried to be as good as possible.

Is telling children about lumps of coal being delivered okay? I know it’s just a silly tradition, but is it a form of manipulation? Is it a trick that bigger people play on little people? Is it just a fun game? Is the coal concept based on principle or not? And, should we give our children T-shirts that brag about getting coal or being naughty? (I’ve seen them hanging in stores.)

We will talk about T-shirts a little later. The main issue here is why do we tell children they can get lumps of coal for Christmas? Where did that tradition come from? And, does the tradition match the Christmas message, or is it manipulation?

As a person who teaches parenting classes, I advocate for teaching children cause and effect, and being as consistent as possible so that children get the opportunity to accept consequences. If children don’t accept their consequences then they will not learn self-government; which principle is the whole purpose of parenting children. So, is coal for Christmas a good negative consequence?

Most parenting experts will say that you should never tell your child that they will earn a consequence that you will not really enforce. What parent really gives coal? If you just talk about bad consequences then you are merely threatening. Threatening children is manipulation. The point of making a threat is to scare the child into temporary good behavior in order to make life easier for the parent for the moment. Any type of parenting that is meant to evoke emotion or fear in the heart of a child is manipulation. So, by this definition, coal for Christmas is manipulative.

The only way for coal for Christmas not to be manipulative is for the parent to actually follow through with the negative consequence, and for the child to be aware of exactly what behaviors are bad and would make the coal consequence happen.

It would work like this. Mom would tell Sam that if he hits his sister or forgets to feed the dog, then Santa will not bring him any presents for Christmas, but will bring him coal instead. Then on Christmas, Mom would determine if Sam did these two things. If he did, she would be bound to follow through with what she promised and deliver a lump of coal to the stocking instead of gifts. If she doesn’t give the lump of coal, she is in danger of just manipulating her child, and then Sam will likely not take her seriously on other things.

But, what would happen if she did give Sam the lump of coal? 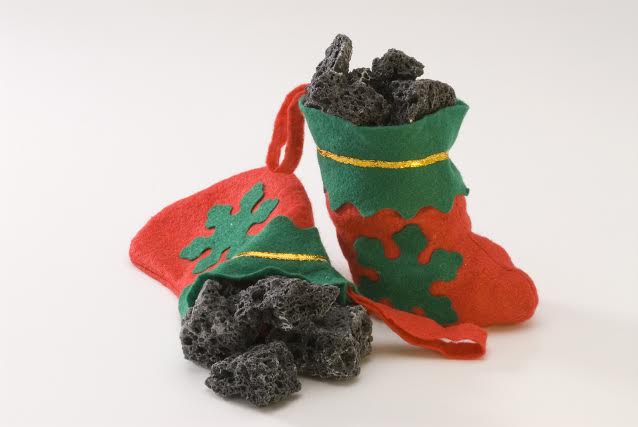 The problem with giving coal for Christmas is that parents don’t really tell their children what the “bad” behaviors really are ahead of time. So, there are too many unknowns. The whole coal structure leads to anxiety. There is no skill the child has to learn or way to determine if they have been good enough or how many bad things can be canceled out by the good things. There is no way to track progress. The way most people use the Christmas coal idea is not structured at all, it is usually an idle threat.

Probably the biggest argument against teaching children about coal for Christmas is the whole point of Christmas though. Christmas is about Christ, the Savior of the world, the Son of God who atoned for our sins and makes it possible to be forgiven for our wrong doings. His life and death and resurrection were gifts to all men. Whether a person makes bad choices or good choices He still gave these gifts. So, if Santa is a symbol of Christ, as I believe him to be, then it only makes sense that he would show his love to you on Christmas no matter what you had done wrong. In fact, especially if you had been less than perfect, he would want to show you that he cared for you like Christ cares for you. Since Christmas is about Christ, then the gift giving should be done the way Christ gave to us.

Sure, Christ has set up His own system of cause and effect for us to learn, but when it comes to His gifts, they are for all.

This Christ’s gift principle can be applied every day, not just on Christmas. Do nice things for the people you love. Serve your children. Do it because that is your gift to them. They shouldn’t have to earn your love or your service or a birthday present. However, when you are teaching them to behave properly, teach them using the cause and effect principle. Don’t manipulate or threaten them. Teach them the skills they need to learn self-government. Teach them to calmly disagree and to love and understand obedience by teaching them to accept no answers and follow instructions.

Parents who apply the gift principle and the cause and effect principle to their family relationships will be balanced and predictable. They will feel safe, and they will train up wise children.

I don’t know if you have noticed, but T-shirts are getting more and more creative now days.

In fact, some of the messages on T-shirts are so creative that they are not principled. If a person wears a T-shirt that says “I hate my brother,” or “The Devil Made Me Do It” the person is advertizing and internalizing ideas that could go against their core beliefs.

If I believe that families are forever and that they are supposed to be the most important relationships we have, the first T-shirt would make me a hypocrite at the least. If I believe that I make my own choices and that the Devil should not be followed, then the second T-shirt would be an excuse and a testimony to the power I feel the Devil has over me. I know these things are supposed to be funny, but if you look a little deeper, so many of the T-shirt symbols and slogans are gently participating in re-scripting our minds and hearts toward selfishness and disconnection etc.

So, when I walk by the shirts that say “I’ve been really naughty this year, so I get nothing but coal.” I can’t help but wonder. What kind of person would want to brag about their bad choices and get excited for a negative consequence? The only answer I can give myself is a person who is negative attention seeking.

I know we probably just went deeper into popular fashion that most people like to go. Many people could think I have really analyzed too much at this point. Maybe, but I’ll tell you what.

That day in my youth at about age five will always be etched in my mind. That was the day I feared Santa, and questioned my own worth. I questioned his love. It was not sure to me if he could love me if I did something wrong. I was worried and afraid. This was not the reason I should have been good that year.

I don’t remember how many Decembers I was manipulated by this fear, but I know that for a few years at least, one Christmas tradition I had was to be afraid that I wasn’t going to be good enough for a gift from Santa. Don’t let that be your Christmas tradition. Teach your children this year about what the gifts from Santa really symbolize and talk about the unconditional love the Savior has and each person’s worth in His eyes.