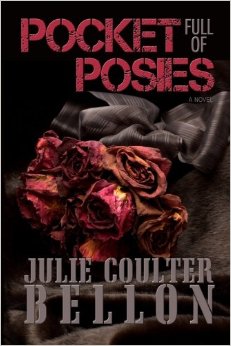 “Keep your friends close and your enemies even closer” is advice given in Julie Coulter Bellon’s newest international intrigue novel, Pocket Full of Posies. Once again she delivers an edgy, high action story featuring a member of an elite hostage negotiations team based with the Hartford Police Department. This time Bart Gutierrez is the central character. Bart’s earliest memories are of a small Texas town and his close friends, Lucy and Manny. He never knew his father and his mother refused to talk about him. In his mid-teens his mother abruptly left Lucy’s father’s funeral to take Bart hundreds of miles away where he never felt he fit in and had to fight to avoid the gangs and neighborhood bullies.

A joint federal and local team, following strong leads, are set to take down a couple of high leaders of a South American drug cartel who have arrived in Hartford. Bart is annoyed with the way the head of the task force throws his weight around and his dismissive attitude toward the local team. He grows impatient with the amount of time wasted as the officers wait for orders to strike. Before the order comes chaos erupts inside the house they’ve surrounded. A gun shot is fired and Bart is the first to reach the pair inside the house and is shocked to discover the man is dead and the woman is an old friend from when they were children and teenagers in Texas more than ten years ago.

Unknown to Bart, the woman arrested, Lucy Aguayo, is an undercover mole biding her time to exact revenge for the murder of her father and uncle. Once circumstances throw the two together, they join forces to bring down the leader of the drug cartel and in the process they discover two things. The drug lord is dealing in something even more dangerous than cocaine and he has a personal connection to Bart.

Bellon’s characters are exciting, likable, and realistic to a point, but they aren’t deep character studies. The emphasis in her books is on the action which is well researched and keeps the reader’s heart thumping. She uses several people involved in law enforcement, combat, and international law to cross check the various maneuvers and actions her characters make. She also sets the stage well with exciting and varying backgrounds. This book takes place partly in a small US town and partly on an island off the coast of Columbia. Scenes also take place not only in Hartford, but in the air, on a yacht, on a beach, and in a South American villa.

Mystery/Suspense novels usually begin with a piece of exciting action to begin the story, then build the mystery or suspense as the story proceeds, then feature a huge dramatic resolution scene. A Pocket Full of Posies follows this pattern, but the tension remains high throughout the book with one exciting scene after another. Be sure to block out enough time to read this one from cover to cover because there aren’t any good places to stop.

Julie Coulter Bellon was born and raised in Canada, but now lives with her husband and children along the Wasatch Front in Utah. She taught journalism for fourteen years at Brigham Young University. She is the author of ten novels and the recipient of the 2012 Rone Award.