I Lost My Child In Buckingham Palace | Meridian Magazine

I Lost My Child In Buckingham Palace 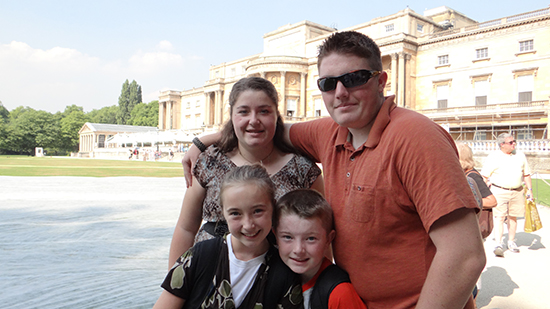 Along with doing lots of self-government teaching here in the UK we are trying to see some of the sites. So far the presentations have gone very well. Hearts have been touched, and families are inspired to be more united. The site seeing has also been enjoyable, except for one moment in Buckingham Palace when we lost Paije.

All I can say is, I forgot to pre-teach the children before the tour. You wouldn’t think that a fifteen year old girl would have a problem getting lost on a tour; but she did. Even fifteen year old youth need pre-teaching.

How it happened and what we did about it

Buckingham Palace is a beautiful place. We were all mesmerized by the palace decor and the royal stories.   When our whole family was in the throne room Paije became very fascinated with some of the exhibits. We didn’t notice that she was still looking at things when we made our way to the next room. And, she didn’t keep track of where her group was.

I was constantly keeping track of the younger children, and assumed that the older children would keep up with us. About three rooms later, I noticed that Paije wasn’t walking with us any longer, and I started looking around for her. We checked the rooms we had been in and talked to the tour guides in the palace. All of us were looking for Paije. No one could find her.

So, in the end we were advised to keep going along the tour and see if we might find her at the end of the tour route. I didn’t really panic, but it did feel really weird to be touring a building when we weren’t sure where she was. And, we were in a foreign country to boot. So, we walked quickly to the end of the tour and found Paije looking for us out in the Queen’s garden.

When we found Paije, we expressed how happy we were to see her, praised her for staying in a place we could find her, corrected her for not staying with the group, and did a verbal SODAS (problem solving exercise) to help her problem solve what she should have done, and can do another time we might be on a tour.

In the UK the restroom is simply called the toilet. After we found Paije we took a potty break. While waiting in a ‘queue’ (a line) a woman started talking to her daughter. “I’ll tell you why you have to. Because when you’re only nine years old and Sally and I both have to go, then you have to come too.”

At this point, the nine year old started whining more about having to be in the toilet queue. This is when the mother turned to her daughter and said, “You are such a selfish girl….etc.”

I couldn’t help but think of the experience I had just had with Paije. If I had pre-taught Paije about what was expected on the tour, she would have been more prepared to do what was expected. Likewise, if this mother had possibly pre-taught her daughter ahead of time about what kinds of inconvenient situations she might encounter with a travel group, then this girl may have been more able to follow instructions calmly.

Pre-teaching is one of the easiest things a parent can do to make sure an outing or situation doesn’t go wrong, and to train good behavior before it changes to bad behavior. But, it does take a little bit more effort on the front end of each situation. Try to see yourself giving your children a picture of what should happen before it actually does happen, then get in the car or the queue etc.

NOTE: Just so you know, the speaking engagements I have had so far have gone really well, and we just keep going. This is a tiring trip due to the intensity of the schedule, but has been really rewarding so far. Thank you all for making this teaching trip possible.

Check Out The Store! We Have NEW Stuff To Help Implement Self-Government At Your House!

Get a FREE Parenting Revolution Book when you sit with me in my box at the Raising A Standard event in Arizona on October 11, 2013.