LDS Fiction: Small Town has Big Problems in Checking Out 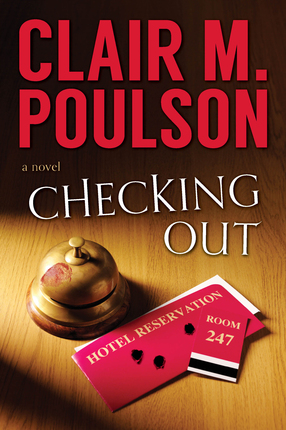 Sometimes life is frustrating. In Checking Out by Clair M. Poulson, Keene Tempest has been picked on and bullied by his older siblings all of his life and he isn’t close to any of them. Now he’s almost through earning his criminal justice degree and is happily working for the LAPD, a job he hopes will segue into a career position, when his siblings insist he has to run his mother’s motel in a small Wyoming town following her death. They convince him it was his mother’s wish and he gives in, but he doesn’t give up hope that this phase of his life will be temporary and he can soon return to law enforcement.

Keene arrives in the small country town and soon learns all isn’t as he’d expected and the small three person police force has their hands full. One of his older brothers arrives, creates a scene, and the next morning is found stabbed to death in his room. Making matters worse, there’s plenty of reason to believe his mother didn’t die of a heart attack, but was murdered too. It appears someone is determined to wipe out his entire family.

Keene accepts a part time job assisting the small police force. He forms strong friendships with all three officers, but his feelings soon go beyond friendship for Officer Chaille Donovan. His relationship with his older sister improves after she arrives, but his other brother dismisses his concerns until someone takes shots at him.

It soon becomes clear someone wants the motel very badly and it may have a connection to a bank robbery that happened a long time ago while the motel was being remodeled. The investigation soon involves the County Sheriff’s Office and has Keene and Chaille following leads that take them to Twin Falls, Idaho, and back to Los Angeles.

Poulson has created believable characters for the most part even though the Tempest family dynamics are that of a highly dysfunctional family and I couldn’t quite decide if the older brothers aren’t too bright or if it is possible to have such contradictory and obnoxious personalities. Keene and Chaille are both strong, positive characters and are easy to like. I kept stumbling over Chaille’s name even though I know it’s pronounced Sha-lay.

The action is fast and the plot line moves nicely. The author shows his familiarity with police procedures in three different areas and the support between offices. Though there are LDS references a few times, this book isn’t as strongly Church related as some of Poulson’s stories. Even though I suspected the killer’s identity early on, there are several twists that gave me serious doubts. Mystery/Suspense readers will enjoy this one a great deal. I did.

Clair Poulson and his wife have farmed and ranched in his hometown of Duchesne, Utah, most of his life. Along with his active interest in horses and ranching, he and his family have been involved in the grocery store business, but his main interest has been law enforcement. He has served as an MP for the Us Army, as Duchesne County Sheriff, and for more than twenty years he has been a justice court judge. During those years he has served on many state and federal law enforcement boards and councils.

CHECKING OUT by Clair M. Poulson, published by Covenant Communications, 230 pages, soft cover, $16.99, Also available on CD and for e-readers.

I just finished reading the book. Like most of Poulson's other books, I didn't want to put it down!