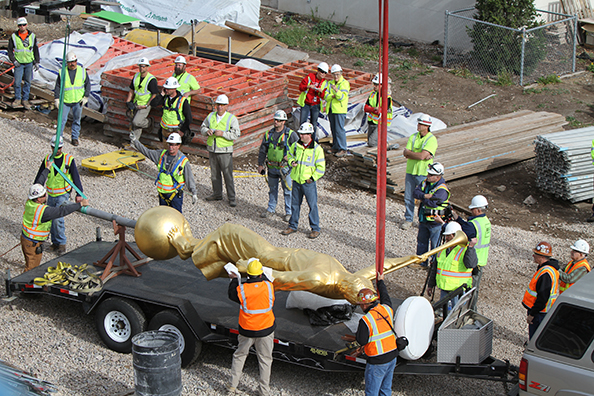 As renovation of the Ogden Utah Temple continues, construction crews placed an angel Moroni statue atop the new temple spire Tuesday morning. The 14-foot, 2-inch figure is the same statue that topped the temple before it was closed. The statue was removed at the beginning of the project and completely reconditioned.

The addition will bring the height of the renovated temple to just under 190 feet. The statue is made of fiberglass coated with gold leaf, supported by a steel structure and weighs nearly 800 pounds.

The temple was closed in April of 2011 to remodel and architecturally change the appearance and the grounds. An artist’s rendering of the completed project is included below.

The estimated completion date for the temple is late 2014. Dates for the open house period have not yet been announced. 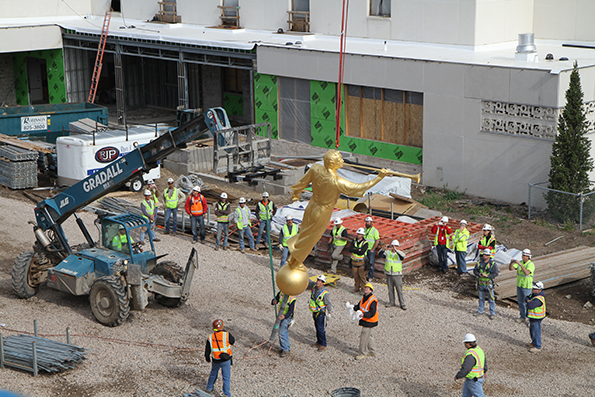 The temple’s entire exterior will be reshaped with new stone and art glass. The entrance to the temple will also be moved from the west side to the east side, where it will face Washington Boulevard.

Inside the temple, some rooms will be reconfigured, but the core building design will remain the same. As has been the case in renovations of other temples, old electrical, heating and plumbing systems will be replaced with modern, energy-saving equipment. Other notable improvements include underground parking and a complete re-landscaping of the temple block with a major water feature. 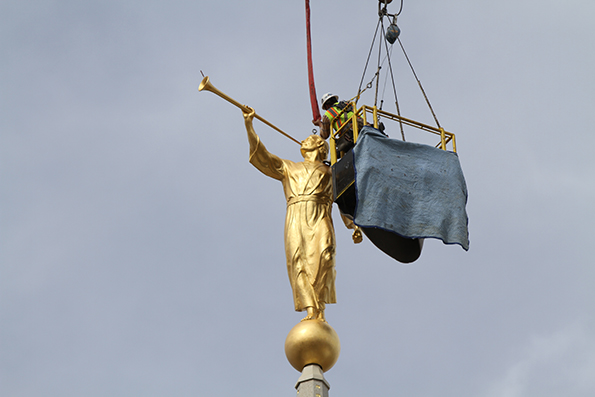 Latter-day Saint temples provide a place where Church members make formal promises and commitments to God and where the highest sacraments of the faith occur, such as the marriage of couples for eternity. Temples differ from the tens of thousands of local meetinghouses where members typically meet for Sunday worship services and midweek social activities.
Before the temple closed for renovation, it served approximately 76 stakes comprised of approximately 261,928 Church members. During the construction project, members are encouraged to attend the Logan Utah and Bountiful Utah Temples. 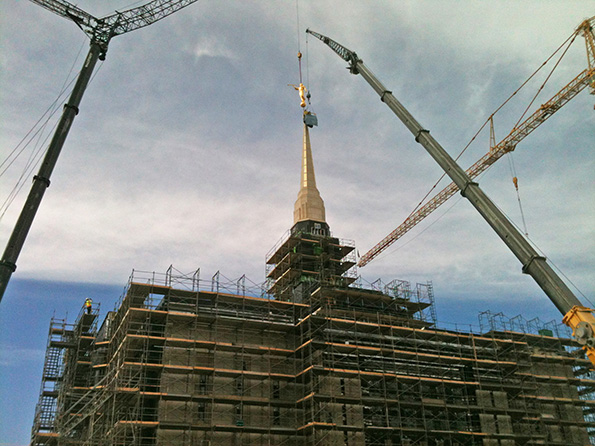 More photos and video of the statue placement will be added to this page as they become available. For construction updates throughout the project, please see the Ogden Temple site.

[…] Angel Moroni Placed Atop Ogden Temple – As renovation of the Ogden Utah Temple continues, construction crews placed an … As has been the case in renovations of other temples, old electrical, heating and plumbing systems will be replaced with modern, energy-saving equipment. […]

this alone is very inspiring thus when placing angel Moroni on top of the temple i love to see this and i admire it i know the lord is always happy to see this members we are paying our honest tithing and fast offering.i know the church of Jesus christ of latter day saints is the only true church upon the surfase of the whole earth.from julius nephi selasie

Enter to Win the Great Giveaway: The Ultimate Church History Tour for 2!

By Breck England
PAST ISSUES