Anticipating the Most Refined Society 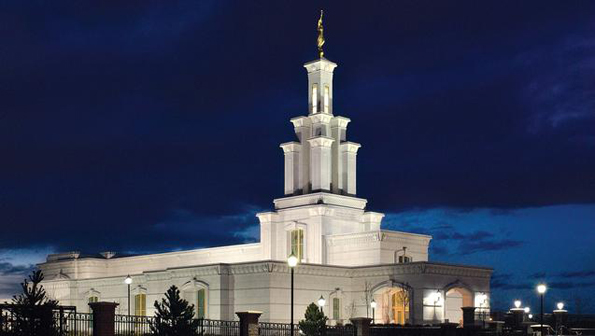 For many years I have been known to start my classes each semester at Brigham Young University in a rather unusual way. I go straight to the board, write certain words, and ask the students how we should pronounce them: Melchizedek (Mel-KIZ-e-dek), patriarchal (not patriartical), paradisiacal (pa-ra-di-SI-a-cal), Chaldees (with a hard “k” sound to begin), irrevocably (ir-re-VO-ca-bly or ir-REV-e-ca-bly, either way-Webster doesn’t care), shew (a biblical word with an old English spelling, properly pronounced “show,” just like we pronounce what we do with a needle: “sew”), Ensign (EN-sign, not EN-s’n), and err (not pronounced “air” but “ur,” as Abraham’s hometown, or as the word “urn”).

Next, I ask students how to write the following words: Israel (not Isreal, as it sometimes appears), Ephraim (not Ephriam), Millennium (always with two “l”s and two “n”s-unless it’s misspelled), apostasy (not apostacy, though the verb changes to apostatize), prophecy (though the verb is prophesy), judgment (though judgement is also correct, if the publication is from London or Liverpool-the British still spell it with the middle “e”), altar (as in sacrifice; not alter, which is a different word), grateful (not greatful), and “a lot” (not alot).

In writing we should not use the spoken terms “could of” and “would of” where we really mean “could have” and “would have.” And there is quite a difference between the homonyms site and sight and cite; also counsel and council. The only way to correctly make the Book of Mormon plural is not “Books of Mormon” or “Book of Mormons” but copies of the Book of Mormon.

We might want to be careful how we use the term “pre-existence,” since there is technically no such thing. We use the word frequently, because we know what we mean by it, but technically we have always existed in some form or other. A better way of saying it is “pre-mortal existence,” “pre-mortal life,” or “pre-earth life.” Also, we might want to avoid calling one of our volumes of sacred scripture, the “D&C.” We use that abbreviation all the time in writing, but when we speak we could take an extra second or two and call it what it is, and emphasize what it contains: the Doctrine and Covenants of the Church. Some in the world know “D&C” as “dilation and curettage”-meaning expanding a womb and scraping it out-in some cases removing substances and tissues after an abortion. We certainly don’t want to use an abbreviation where someone may be thinking in that context! Another caution: In our adulthood we often refer to our initial experience in the Temple as “taking out our endowments.” An endowment is a sacred gift of knowledge; instead of “taking it out” we are actually receiving it.

When students write papers they frequently use the expressions “what struck me . . . ” or “what stuck out to me” (or even an occasional “what struck out to me . . .”). Teachers tire of those expressions. Some students have devised alternative approaches: “the passage which caught my fancy . . .” or even “another phrase protruded into the realm of my deeper thought . . .” That is certainly more creative.

I love belonging to an organization that believes that if there’s something worth doing, it’s worth doing in a quality way. Joseph Smith had an indefatigable appetite for learning. What does that big word “indefatigable” mean? It means insatiable, unquenchable, not able to be satisfied. He wanted to learn all he could about everything. When schools of the prophets and schools of the elders were organized in the early decades of the restored Church, the Prophet and other leaders studied not only theology, but also Hebrew and other languages, penmanship, English literature and grammar, arithmetic, philosophy, government, geography, and history. Those who are endowed with the Spirit of the Lord are anxious to seek out of the best books-and from the best teachers-and learn every good thing. All this is part of the purpose of the Church: to come unto Christ and be perfected in Him.

Brigham Young wrote, “All the knowledge, wisdom, power, and glory that have been bestowed upon the nations of the earth, from the days of Adam till now, must be gathered home to Zion” (Discourses of Brigham Young, selected and arranged by John A. Widtsoe, 245). President Young also encouraged the Saints to “learn everything that the children of men know, and be prepared for the most refined society upon the face of the earth, then improve upon this until we are prepared and permitted to enter the society of the blessed . . . in the presence of God” (Journal of Discourses, 16:77).

President John Taylor went a step further when he exclaimed: “You will see the day that Zion will be as far ahead of the outside world in everything pertaining to learning of every kind as we are today in regard to religious matters. You mark my words, and write them down, and see if they do not come to pass” (Journal of Discourses, 21:100).

We Must Excel in Learning

So the Latter-day Saints are trying to excel in every field and discipline of learning. Here is one more illustration of how we could improve and refine our communication skills. In most employment settings there is writing to be done, so in educational settings it is wise to learn to improve our writing skills. If we’re honest with ourselves, generally speaking we can admit that we don’t write very well-especially with the multitude of hand-held devices we’re using to communicate in the twenty-first century, with increasingly diminishing concern for spelling, grammar, syntax, punctuation, and other valuable communication practices. We are prone to dismiss traditional skills and correctness in favor of brevity.

Of all the steps involved in preparing a good document-gathering, researching, outlining, writing, and reviewing-perhaps the most critical step is proofreading. Before anything written is submitted for use or publication it should be proofread by one or more persons. The more eyes perusing the document, the better. It will save the author(s) some embarrassment.

I have seen numerous “scribal errors” in students’ papers over the years, and I have collected and preserved some of the funniest and some of the most ridiculous. A master’s student some years ago submitted to me the final copy of his thesis (the copy that was to be bound and placed in the university library). He was writing about enemy approaches to Jerusalem in ancient warfare. One sentence of the thesis read that Joshua and the armies of Israel “slew them with a great slaughter at Gibeon,” only he had left the “s” off the word slaughter. A few pages later I read about “the threat of an Assyrian onslaught,” but he had left the “h” out of the word threat. I chuckled, but then realized that this was the final copy of his thesis.

A student in a Book of Mormon class turned in a paper that began: “Its story has a vital massage for all people . . .” The student meant “a vital message for all people,” but I suppose the word massage could have some symbolic meaning also. An honors paper contained the encouragement to “do all things with an I single to the glory of God.” A student in a Bible class wrote, “it was good to have reconfirmed to me that the Bible is so impotent to many people.

” Could the word “impotent” depend on the accent of the speaker? There’s a world of difference between important and impotent. A student in a New Testament Gospels course wrote, “He took on Himself our sins and our surfing.” That’s not even funny, of course-but a classic example of the need for proofreading. Another pathetic but real example: “We discussed the names of the Father and the Sun.”

Even professors must be careful to proofread materials before they are distributed. Here are two sentences of a handout by a BYU religion teacher, quoting a general authority: “Just serve the Lord and keep his commandments and build the kingdom, and as you do so you will be protected in these last days. God will have his hand over you, and you can plan your loves with confidence.”

On another occasion I was reviewing the manuscript from three professors that was about to go to press, about “Joseph rising to power in Egypt, his family relocating there because of feminine in Canaan.” They meant famine, but the way it came to me was a rather provocative error.

All of what I’ve described in this brief article is simply in the interest of being careful to do the best we can, having a heaven-inspired desire to do all we can to prepare to be part of the most refined society on the face of the earth; to encourage and establish Zion; to work toward being pure in heart and perfect in mind.

Next time: “Anticipating the Most Refined Society” – Part 2

Dr. Ogden sounds like a very fun professor. No one should get angry over a teacher teaching us to improve. I would love to hear people correctly pronounce Doctrine and Covenants instead of Doctor and Cuvnunts. I would like to hear Joseph Smith pronounce clearly instead of a quick blur of the name that makes it sound like Josmith. I would love to be a part of refining my own speaking ability. Thank you for the great article.

At last-- an article that raises the bar for excellence in verbal and written communication. I have been stunned to read very poor papers written by high school students.The sentence structure and spelling appears to be the work of a 4th grader. I have also heard adults make sarcastic comments about the "50-cent words" others use.The more we develop our vocabulary, the more accurately and clearly we can express ourselves.