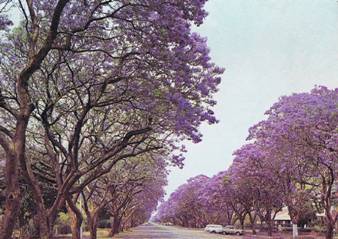 One afternoon after dinner, my companion Elder Larsen and I headed out on our bikes to start tracting.  We were serving in Salisbury, Rhodesia (now Harare, Zimbabwe) and it was a beautiful day in the summer of 1975.  The cool, dry climate of early summer in Africa helps the Jacaranda trees lining the boulevards burst forth in bright purple blossoms.

The small branch of the church in town wanted to grow, and we were there to help. We did not have cell phones in those days, and our proselyting area was located some 700 miles north of the Mission Home in Johannesburg, South Africa. To get there involved a drive of over 14 hours over some narrow two lane roads.  Because of the large distances in the Johannesburg South Africa Mission (Cape Town was also in our mission at over 1,500 miles away) we were typically transferred by airplane and train, and a transfer might require several days of traveling, often alone.  Our mission president, Robert Thorn, kept in touch with his missionaries by weekly letter and an occasional phone call to our landlady, if we happened to be home at the time and the antiquated land line connection worked well, which was rare.

As we pedaled along the main road leading to the neighborhood where we wanted to start tracting, I had no idea that I would be in the hospital in a few minutes.

The sights and smells of Africa are intoxicating. The flowers are beautiful that time of the year and the scent of the flowers and the colors of the blossoming Jacaranda trees made me happy to be a missionary. Street peddlers were hawking their wooden carvings of various African animals on the sidewalk to tourists who had come to Africa to see the wild animals in the big game parks scattered throughout the beautiful country of Rhodesia, then a British Colony.

To get to our area we had to first cross Jamesson Boulevard, with its four lanes of traffic.  The boulevard is divided by a yellow and white stripped island or center median strip. Elder Larson and I crossed two lanes of traffic and arrived in the painted island.  I was about 15 feet behind my companion.  We both stopped.  I had both feet planted and looked down the street to check just to make sure the road was clear before going across to the other side.   Three seconds later I remember hearing an explosion in the back of my head.  There was no warning, just the explosion of metal crushing and glass shattering.  I felt my head sink into the glass of the car’s windshield.

The sound changed immediately to the dull but quick grinding of pounded glass. I remember saying to myself, “This is it; you’re out of here.” I saw more metal and felt a sharp pain across my back from the top of my right shoulder extending over my ribs to the bottom of my back. The pain I felt in my back was the rear tire of Elder Larson’s bike.  I know because the black impression of the tire tread was clearly marked on the back side of my white shirt, in fact it looked thick enough to scrape off with a knife.  After bouncing off of Elder Larson’s bike, I continued airborne down the road another  20 feet or more.  I braced for the coming impact, but then I felt as if unseen angelic hands caught me in the air and lowered me gently to the ground. I don’t remember ever touching or sliding across the asphalt road.

There was essentially no evidence of another impact after bouncing from my companion’s bike tire.  My clothing shows no evidence of having touched the road.  I know someone was with me from the instant the car slammed into me.  I was conscious the entire time; not a second passed that I wasn’t fully alert and completely without fear.

Lying on my back in the street, l looked down the road and saw the smashed windshield of the car.   I could see a hole in it shaped after the back of my head. The hood of the car and radiator were also smashed and pushed back into the engine of the car.  Apparently the car’s engine stopped on impact when the radiator and hood were forced or crushed into it as the car hit me.  Both of our bikes were demolished.  There was a moment of silence as I lay on my back in the middle of the road looking up in to the sky.  I saw the faces of people gathering around me. Someone shoved a something under my head.  The man driving the car knelt at my side looking about wildly and repeating loudly, “It’s my fault. I did it; it’s my fault.”  He was obviously intoxicated.

My white shirt and chest were soaked with blood from a deep cut in my hand. A policewoman arrived a few minutes later.  As she brushed the pieces of glass from my face and under my eyes, she asked me how I felt. I answered, trying to be funny, “a little run down.”

She responded with a smile, “Oh be quiet and don’t move!”

My body started to shake.  A policeman marked the position and outline of my body in the street with chalk. After they covered my body with a blanket, a police sergeant came over and asked, “Is he dead yet?”

I responded loudly, “No give me a minute!”

I told the police two or three times what happened before the ambulance arrived.  Two young men arrived in an ambulance and loaded me into the back.

I thought it might be my last opportunity to give the gospel message. As we raced to the hospital, I started telling my young ambulance attendant about Joseph Smith.  When I got to, “He saw a light descend upon him brighter than the noon day sun,”  he quickly put his hand on me and said,  “You’re going to make it, just take it easy, stop talking.”

He thought that I had a head injury and was going into shock.  I gave a Book of Mormon to the attendant before we arrived at the hospital. I then waited about 40 minutes before they started taking x-rays.  They took about 30 x-rays and then left me in the intensive care observation room for the night.  I gave parts of the plan of salvation discussion to the nurse that worked with me.  She had lost both her husband and her daughter in different car accidents.

Although by body was covered with bruises from the impact with the car and bike, the doctors were soon shocked to discover than no bones had been broken and that there were no road rashes or scrapes on my skin as one would expect from this type of high impact accident. The doctors reviewed the numerous x-rays and then reluctantly released me the next day to return to my apartment and to my missionary responsibilities, telling me that I was one very lucky young man to still be alive.

The missionaries in my district were all relieved that I had survived my brush with death due to the divine intervention of an unseen personage or power lowering me gently to the ground.

There is no telling what would have happened if I had slammed into the street, curb or perhaps other cars coming in the opposite direction.

Most of the information above is taken from my missionary journal written the day after the accident.

Elder Dallin H. Oaks taught the following about the miracle of protection enjoyed by missionaries:

“Still another miracle is the way missionaries are protected during their labors. Of course we have fatalities among our young missionaries-about three to six per year over the last decade-all of them tragic. But the official death rates for comparable-age young men and women in the United States are eight times higher than the death rates of our missionaries. In other words, our young men and women are eight times safer in the mission field than the general population of their peers at home. In view of the hazards of missionary labor, this mortality record is nothing less than a miracle.”  Ensign June 2001(emphasis added).

I fully realize that accidents do occur, and that not every missionary receives this sort of angelic protection while in the field. But I am grateful that on that particular day, in the middle of Africa, many hundreds of miles from my Mission President, I was protected and allowed to return to work because of a missionary miracle, as discussed by Elder Oaks above.  Ever since being spared serious injury that afternoon long ago, I have had a strong testimony that God is aware of the details in our lives, and can send angels to help us and intervene when it is necessary and in accordance with His will. 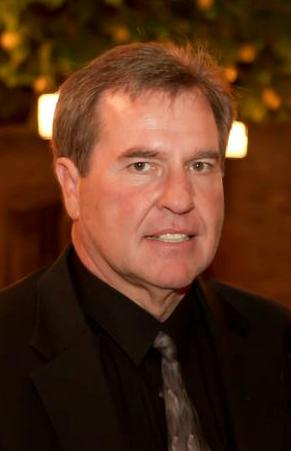 I was hoping to acquire Mr. Heaton's email, I am looking for two missionaries who served in South Africa in 1975? [email protected]