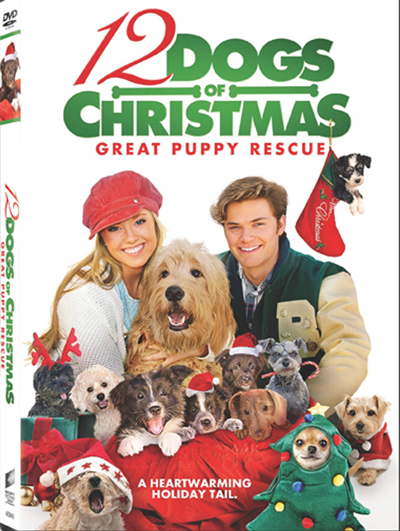 It’s tough to pull off a good dog movie. For every Old Yeller, Lassie, or White Fang, there’s a cheap Beethoven or Air Bud sequel to drag down the genre. These types of films are by nature sentimental and family-friendly, which is fine in and of itself, but often leads to lazy storytelling and characterizations by filmmakers who are counting on cute pups, melodramatic plotting, and leg-raising pee-pee jokes to carry a 90 minute production. Fortunately, director Kieth Merrill (The Testaments, Legacy, Mr. Krueger’s Christmas) is not a lazy filmmaker. Having honed his craft over decades of movie-making, including an Oscar-winning documentary and a dozen IMAX films, Merrill brings his artistic sensibilities to the table with 12 Dogs of Christmas: Great Puppy Rescue, which works as both a standalone film and as a sequel to his original 12 Dogs of Christmas.

Granted, Great Puppy Rescue is not high art. It’s not challenging, mind-blowing cinema. It’s a simple, straightforward family film. What it does, however, it does very well, giving further evidence to Roger Ebert’s famous assertion that “it’s not the story you tell, but how you tell it.” With a charming lead performance by DaniChuchran (who gives her character spunk, warmth, and wit) and solid supporting work by Heather Beers (Charly, Baptists at our Barbeque), and D.B. Sweeney (The Cutting Edge), as well as a host of young actors and cuddly canines, the characters are better-realized than in other films of the genre. It makes a difference that we come to care about the characters. Sean Patrick Flannery (The Young Indiana Jones Chronicles) comes across as more of a one-dimensional villain, but that’s par for the course. The attention to detail in recreating the look of the 1930’s in clothing, props, and sets is impressive, and the song and dance numbers provide some real razzle-dazzle. 12 Dogs of Christmas: Great Puppy Rescue is a well-crafted, well-acted, warm-hearted holiday movie that goes down as easily as a glass of egg nog. Families will enjoy it immensely. It is now on sale on Amazon.

CONTENT OVERVIEW: 12 Dogs of Christmas: Great Puppy Rescue is rated PG. It has no violence, sexuality, or language. There’s an accident scene and some moments of puppies in peril, but the film is designed to be appropriate for all ages.

MESSAGES TO DISCUSS: We all have different gifts and talents; if we unite them by working together, we can accomplish great things (1 Corinthians 12:4-27). Dogs can be wonderful friends and sources of comfort (Luke 16:21).

For more film reviews from a Latter-day Saint perspective, including of this week’s The Hobbit, please visit www.mormonmovieguy.com