Praiseworthy Media Now in Theatres- Hotel Transylvania, Won’t Back Down

A couple of solid releases recently came out in theatres: the family-friendly Halloween romp Hotel Transylvania and the public school reform drama Won’t Back Down. 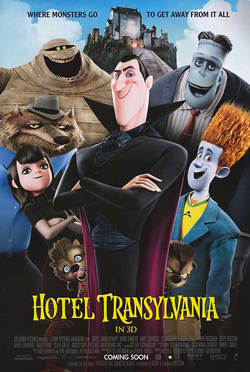 A lightweight but warm-hearted Halloween movie that’s fit for the whole family, Hotel Transylvania is cleverly designed, enjoyably silly, and not the least bit demanding. Adam Sandler lends his voice as Count Dracula, who has long since given up terrorizing and now runs a hotel for monsters deep within a haunted forest. Taking the perspective that horror icons such as Frankenstein’s monster and the Wolf-Man are actually loveable and harmless (but persecuted for being different) Dracula’s Hotel Transylvania serves as a sanctuary of sorts to protect his friends and beloved daughter from humans. When a backpacker (Andy Samberg, Hot Rod) stumbles into the hotel, the film embarks on an exploration of prejudice and acceptance that’s actually quite funny and surprisingly moving. The movie expertly parodies the legends of classic horror monsters (it’s impressive just how many of them make an appearance here), and while some of the jokes fall flat, Halloween-loving kids and adults will have a ball.

CONTENT OVERVIEW: Hotel Transylvania is rated PG. It has some potty humor (Frankenstein passes gas, the Wolf-Man’s children urinate on furniture) as well as some humorous moments with monsters getting injured (Dracula burns in the sun, Frankenstein belly-flops off the high dive and his body parts float away in opposite directions, zombies light on fire and don’t care, etc). A few moments might frighten the smallest of children, but the film’s tone is light and nonthreatening.

MESSAGES TO DISCUSS: We should refrain from judging those who are different from us (Matthew 7:1-2). Often the individuals and groups we fear have much in common with us; there is good in them that we’ll notice if we stop to look for it (Mosiah 9:1). “Be friendly. Be understanding. Be tolerant. Be considerate. Be respectful of the opinions and feelings of other people. Recognize their virtues, don’t look for their faults. Look for their strengths and virtues, and you will find strength and virtues that will be helpful in your own life” (President Gordon B. Hinckley, as quoted in Go Forward With Faith by Sheri Dew, p. 576).

WON’T BACK DOWN REVIEW (GRADE: B) 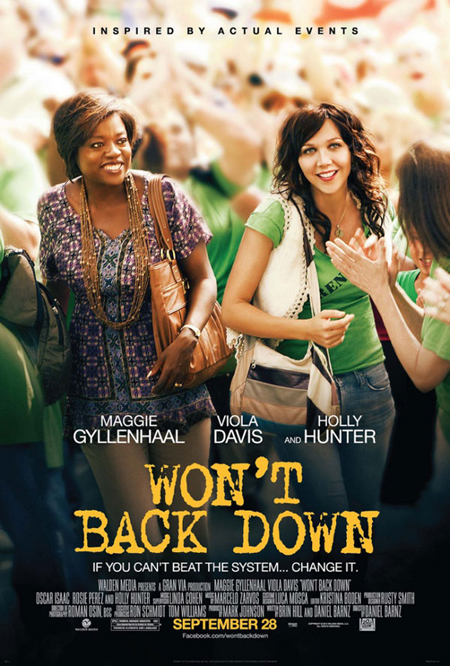 Using fictional characters to explore a variety of real-life challenges in America’s public schools, Won’t Back Down is, for the most part, an intelligent and balanced look at the issue. Rather than vilifying teachers or teachers unions as a whole, it nevertheless shines a light in the corruption and idleness that has seeped into the system. Viola Davis (The Help) and Maggie Gyllenhaal (The Dark Knight) impress as a pair of inner-city mothers fighting for school reform, while Holly Hunter, Rosie Perez, and Oscar Isaac (The Nativity Story) also do fine work. A few of the peripheral characters, sadly, come across as one-note villains (albeit ones whose motivations make sense), while the film can also be a bit too sanctimonious for its own good. Still, there’s some nicely-played drama here (a scene between Davis and her son towards the end is particularly touching) and the film’s arguments are clearly delineated. Those who enjoy this film should have a look at the acclaimed documentary Waiting For Superman.

CONTENT OVERVIEW: Won’t Back Down is rated PG. It has a few mild profanities and scenes of people drinking alcohol socially. There is no violence or sexuality.

MESSAGES TO DISCUSS: You can accomplish great things if you don’t give up when it gets hard (Galations 6:9). The Lord puts great stock in learning, studying, wisdom, and intelligence and so should we (D&C 88:118; 130:18-19). There is no shame in having a learning disability; those who seek to help such individuals should focus on loving instead of judging, displaying acceptance, giving personal time and attention to work together, modify teaching styles, and more (see Laurie Wilson Thornton’s excellent Ensign article “The Hidden Handicap” for more information).

FOR MORE REVIEWS OF CURRENT FILMS FROM A LDS PERSPECTIVE, PLEASE VISIT www.mormonmovieguy.com