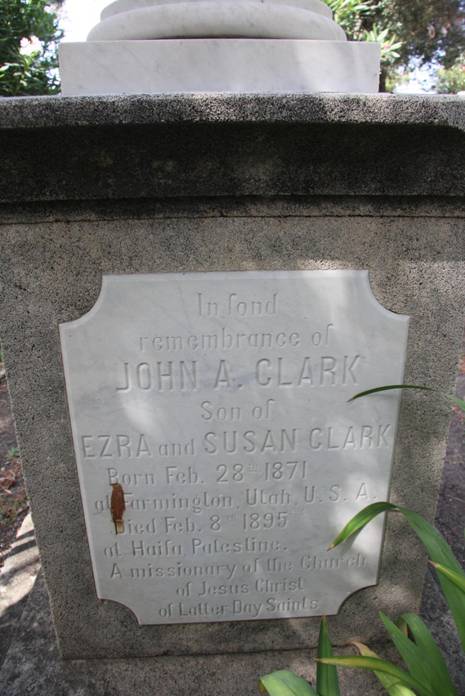 With so much unrest recently in the Middle East, it may be hard for some to believe that years ago LDS missionaries actively proselyted in the region. This is the true story of one of those rare missionaries.

Elder John Alexander Clark was born February 29, 1871, the fifth child in a family of ten, to Ezra Thompson Clark and Susan Leggette Clark, in Farmington, Utah. By the time he was 23 he was teaching school in Minersville, Utah, but he felt impressed that he needed to serve a mission. When his mission call finally arrived, he was surprised to read that he would be serving in Palestine. His parents were worried about his being called to serve in such a remote part of the world, and begged him not to go. But John firmly believed that the Lord had a special purpose in sending him to the Holy Land, and he was determined to serve where he was called by the Lord. When he arrived in the Turkey mission (via England and Germany), he was eventually assigned by his mission president to work in Haifa, about an hour north of Jerusalem.

His sister, Susan Clark Stead was very close to her brother John. She wrote in her life’s history has follows:

“Of my six brothers and three sisters, a close companionship existed between my brother John and I. From our early childhood, the joyous days of playing games, competition, and learning verses and multiplication tables were shared together. Attending school and teaching school together have been vivid and cherished memories.”

“When John was called on a mission in 1894, he was teaching school in Minersville, Utah. After the Christmas holiday, his brother Charles took his place. John was delighted to go to Palestine. He was ambitious for an education and offered to relinquish all claim on the family property if he could realize his desire.”

A short story from the family illustrates John’s deliberate personality. One day an older brother manifested a little impatience in John’s delay when getting ready to go round up some cattle near Bear Lake. “Don’t mind his careful preparation,” said the father, “when John gets off on a trip, he never comes back for something he should have taken.”

Elder Clark’s letters from the mission field, written on parchment to his family from Haifa, Palestine, are touching. One such letter dated September 18, 1894 reads as follows:

“Dear Sister Alice, and you are really in Provo at BYU? This is the year I was supposed to graduate, but the Lord willed it otherwise; and we were to attend this year together weren’t we? But we are both where we should be…. I am having a very fine time now; am enjoying the blessings, which I have imagined missionaries enjoyed. Am as contented as you could imagine and enjoying my mission to a very great extent. I am getting along nicely with the language. In fact, I am blessed exceedingly in understanding and making myself understood. I scarcely ever speak English to anyone save myself. I have been here one month and feel right at home; getting along splendidly. Shall be very pleased to hear from you. Your true brother, John A. Clark.”

Unfortunately, Elder Clark soon thereafter entered a home where the family members were sick with a contagious disease and he contracted smallpox. He died several days later at the age of 24 in Palestine. Because of the dreaded nature of the disease, he was quickly buried in a cemetery at the base of Mt. Carmel, Palestine, and his personal belongings burned. From the book entitled “Ezra Thompson Clark’s Ancestors and Decedents” we read:

“John Alexander Clark died in Haifa, Palestine, February 8, 1895. He was teaching school in Minersville, Utah when he was called to a mission to Turkey. He landed at Liverpool in February, met his co-workers in Leipzig, Germany, and in the summer started to work among the German population of Beirut, Syria [80 miles north of Haifa], while starting to study Arabic. In August, he went to Haifa where he started to work among the Arabs. He contracted smallpox and was buried in a cemetery at the foot of Mt. Carmel, Palestine.” Page 120.

Elder Clark’s death was a great shock to the members of his family. He died while working in the Muslim area of Haifa, Palestine. Up until his death, Elder Clark was cared for by Brother and Sister Hilde and other kind friends. Interestingly in the tithing records that the Haifa branch at the time, there is a record giving Elder Clark credit for paying 10 Francs of tithing on January 18, 1895. Still later on January 26, his name appears again as a tithe payer, just 13 days before his death. (See, J. Wilford Booth, Four Heroes Far Away, Improvement Era, 12:898-907). Sadly, just three years earlier, Elder Adolph Haag of Stuttgart, Germany, died August 3, 1892 of Typhus. Elder Haag was also buried in Haifa, Palestine, now Israel. The two graves of these missionaries are located near each other in the same cemetery.

Other than beloved family members, most members of the Church would probably not know of Elder John Alexander Clark and Elder Adolph Haag, but for some interesting developments which occurred in the Holy Land in the mid-1970s. David B. Galbraith, a BYU professor, was appointed in 1972 as the resident director of BYU’s Study Abroad program in Israel. He was also called that same year to serve as the first branch president of the Church in Jerusalem. In these assignments, he oversaw the experience of thousands of students who came to the Holy Land through BYU.

In the mid-1970s, the Church determined that it should seek formal recognition by the government of Israel as a church legal entity with certain legal rights, including the right to be a land owner and to have certain banking privileges (to deal with large sums of money). The Church was interested in acquiring some land for the construction of the BYU Jerusalem Center, and needed to obtain this formal recognition.

There were only five old non-Jewish religions that were recognized in Israel at the time: the Roman Catholic Church, the Greek Orthodox Church, Armani, Baha’i, and the Anglican Church. These entities were of course not interested in having a new upstart Christian religion, particularly one from America, working their way into this elite group. The Baptists and others had already tried and failed previously. The Church’s local attorney in Israel explained that the Church would likely never attain to the status of the original five, whose presence predated the State of Israel, unless the Church could show a similar, official presence existing in the Holy Land dating back before Israel’s establishment in the year 1948.

But then an important miracle occurred. It was discovered that two Mormon missionaries were buried in a cemetery in Haifa. They had died while establishing the LDS Church in the Holy Land some 90 years earlier, in 1892 and 1895, respectively. The inscription on Elder Clark’s headstone made it very clear who he represented:

“In found remembrance of John A. Clark, son of Ezra and Suzanna Clark, born February 28, 1871 at Farmington, Utah USA, died February 8, 1895 at Haifa, Palestine, a Missionary of the Church of Jesus Christ of Latter-Day Saints.”

Elder Haag’s inscription on his nearby tombstone said essentially the same thing (in German). Although there had also been a mission home in Haifa before the establishment of the State of Israel, the real property records did not indicate that it had been purchased outright by the Church. Professor David Galbraith points out in his article entitled: “The Jerusalem Center for Near Eastern Studies: Reflections of a Modern Pioneer,” The Religious Educator Vol. 9, No. 1, 2008, “Even though the street and the very building could be located, there was no evidence of any documents that the Church had owned the land outright.” Nevertheless, based significantly on the fact that the Church’s two missionaries’ headstones confirmed the existence of the Church in the Holy Land in the 1890s, the Articles of Association sailed right through the complex approval process without complication.

Although the Church did not acquire the same exact legal status as the original five churches, the Church had miraculously satisfied the requirements of Israeli law for a modern association as a legal entity. This meant that it had all the legal rights associated under Israel law, which included the right to own land and conduct banking business. The Articles of Association were approved on June 16, 1977. Later another Israeli attorney, Joseph Kokia, was retained to successfully guide BYU through the same political minefield in establishing its own legal status in Israel.

It now became clear that one of the important purposes of the Lord in sending these two young men on missions to Palestine was to assist in establishing the Church in the Holy Land a century later. They had not died in vain!

The two LDS missionaries served as witnesses for truth, making it possible for the Church to establish a learning center in Jerusalem almost a century after their deaths. This beautiful center has blessed not only the lives of thousands of BYU students, facility and members of the Church who have visited the center, but thousands of local residents who have visited the Jerusalem Center for countless lectures and concerts.

The graves are in the Templar Cemetery, Haifa, Israel.

When I was 14 in 1992 I got to tour Israel. One of our stops on our trip was to these gravesites.