When the Reporters Went to Church with Mitt | Meridian Magazine

When the Reporters Went to Church with Mitt 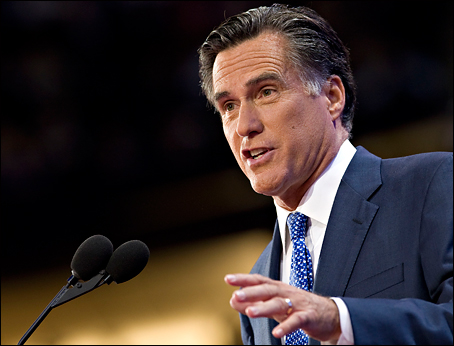 Last Sunday, the cadres of reporters, who follow Mitt Romney around, were allowed to attend church with him in Wolfeboro, N.H. and a spate of articles have appeared this week on the presidential candidate’s religious devotion-some of them complete with photo galleries of Mitt’s life as a Mormon.

McKay Coppin, a reporter who is also a Latter-day Saint, described every detail of the meeting for Buzzfeed from the blond grandchildren whom he juggled on his lap to Ann’s impromptu joining of the women’s choir when the director pled for volunteers.

Coppin wrote, “For all his private devotion, Romney has refused to engage even the most innocuous questions about his faith, arguing that discussion of Mormonism should have no place in 2012’s recession-worn public square. I’ve often wondered why the candidate insists on keeping one of the most meaningful – and humanizing – aspects of his life hidden from public view; what it was about the fundamentally un-exotic Mormon experience that he was so afraid to share.”

Ross Douthat at The New York Times has voiced similar thoughts. He notes that filmmakers who are putting the introductory video for Romney for the Republican National Convention must be puzzled about what the movie should say about his Mormonism. Since Romney has said very little about his faith in his campaign, what aspects of Romney’s life will end up on the cutting room floor?

Most Latter-day Saints understand the Romney reticence. He has chosen to have his campaign be about the failing economy and not be sidetracked by the typical questions about his faith that so often are founded in misinformation and mistrust. We’ve been plied with those kind of questions most of our lives and when they become magnified on to a national stage, the distortions can sometimes get worse.

Still, it means that Romney misses an opportunity to be seen for his humanity and deepest convictions when his religion is never mentioned. As Douthat wrote, “Start with Romney the man, so often dismissed as hollow, cynical and inauthentic. His various political reinventions notwithstanding, Romney clearly does have deep convictions: the evidence is in his intense commitment to his church, as a local leader and as a philanthropist. Between the endless hours of unpaid, “love thy neighbor” efforts required of a Mormon bishop and the scope of his private generosity, the caricature of the Republican candidate as a conviction-free mannequin mostly collapses.

“If Romney were a Presbyterian, Methodist or Jew, this would be an obvious part of his campaign narrative. Like George W. Bush’s midlife conversion or Barack Obama’s tale of race and inheritance,’ Romney’s years as a bishop would be woven into a biography that emphasized his piety and decency, introducing Americans to the Romney who shut down his business to hunt for a colleague’s missing daughter , the Romney who helped build a memorial park  a friend’s son died of cystic fibrosis, the Romney who lent money to renters to help them buy a house he owned, and so on down a list of generous gestures and good deeds.”

This week The Washington Post published an article that goes where Romney hasn’t and examines his faith, based on conversations with dozens of church officials and members who served and worshiped with Romney.

The results are just what you’d expect. Mitt Romney or Bishop Romney or Stake President Romney is a true blue Mormon who gets teary when he bears his testimony, went out of his way to serve the members of his congregation-often in creative and generous ways-and managed heavy responsibilities at work with at least 30 hours of church service a week in some of the positions he’s held. The Post says he had “a genius for milking hours out of the workweek and talent from his aides. He wept with spiritual fervor and believed in a traditional brand of Mormonism that sought daily divine intervention.”

This may be revelatory to the national press and its audience who are not aware of what it really means to be a Latter-day Saint, but we hear this and just nod with familiarity. This is the pattern we’ve all seen among us-a fervor for service and sacrifice and an intense belief in our faith, trained and taught from childhood to be on the constant look out to see who needs help. Still, we may not have seen the life of a Latter-day Saint leader, so trained and deeply inclined, spelled out so vividly on the pages of a national media source before.

The Post said that Romney’s religion “shaped a man as orthodox and committed to his faith as any presidential nominee in history.”

Young Romney served as an executive secretary to his bishop, taught religion to teenagers, served on a High Council and became a bishop at age 34. The Post notes that in his first weeks as bishop he met with so many members suffering from financial problems, he admitted, “I had no idea that people lived like that,” Romney said.

Serving the poor became extremely important to Romney. “The one that bothers me the most that I’ve thought a lot about over the years,” Romney told Phil Barlow, his counselor in the bishopric, “is how genuinely to help the poor.”

The article notes that, “Nolan Don Archibald, a former member of the Cambridge congregation who went on to become executive chairman of the board at Stanley Black & Decker, said Romney picked up the phone to help the unemployed members of his congregation find work. He acted as a marriage counselor and a mentor to troubled teens and provided a willing ear to lonely widows. He called on those in his flock struggling with a crisis in faith to publicly meditate on their problems at sacrament meetings.”

“In a building that prominently featured a depiction of Jesus instructing a rich young man to give his treasure to the poor, Romney reached out to the network of business leaders in the congregation to help put people on solid financial footing. He arranged for one member with money problems to sit down with Steven Wheelwright, a Harvard Business School professor who went on to run Brigham Young University at Hawaii, to develop a personal budget and a path to a better job.”

Romney told Grant Bennett, another counselor, that he wanted everyone in the congregation to “feel something in common with someone in the bishopric.”

Because Romney wanted to make the most of the many hours he spent in church service each week, he proposed holding 6 a.m. meetings at his Belmont home, and let everyone sleep in for his 6:30 meetings on Sunday.

“How early is it polite for me to call you?” he asked Grant Bennett, one of his counselors.

In order to not miss church meetings, he tried to avoid overnight travel when he was a stake president.

He opened his leadership meetings with kneeling prayer in his office, showed a special fondness for a scripture that noted that Christ saw the burdens of men and would not forget them. He sought priesthood blessings when he was ill.

The Washington Post said, “Romney himself sought such healing powers when he suffered from a serious leg infection and told Bennett he could see the redness climbing up his calf’s veins. In a religion in which God is believed to speak through prophets, and prayers are often asked for matters grave and mundane, Romney also sought divine guidance for business success and had a strong sense of God’s literal presence.

“Romney often began speeches by explicitly channeling the Holy Spirit in the hopes of imbuing his remarks to the congregation with an aura of truth.”

Far from being indifferent to the plight of the unfortunate, Romney reached out. John Hoffmire, a colleague at Bain, remembered Romney telling him, “I looked at this young man, and he had a bolt through his lip. But the strongest feeling came over me, and I just thought that Heavenly Father loved that young man just as much as he loved anybody.”

As stake president, Romney particularly served the Haitian Latter-day Saints and challenged them of growing their number by 80 people to justify the building of a new chapel. Fewer than forty sat listening to him. Yet, under Romney the Haitian population grew and grew.

The Post noted that “On March 20, 1994, Salt Lake City released Romney from his obligation as stake president as he ran for a Senate seat against Edward M. Kennedy.

“Even as a candidate, Romney could not keep away from the church service that was so intrinsic to his personal identity and spiritual destiny. After a Sunday sacrament meeting, Romney loitered behind in the Belmont chapel outside his old office, where Grant Bennett, his former counselor and Bain colleague, had become the new bishop.

“‘Bishop,’ Romney said, I want you to know that I don’t have a calling and am very willing to do whatever you ask me to do.’ Bennett appointed him as a Sunday school teacher.”

Though Romney hasn’t made his religion a topic of conversation during the campaign, the media have and the media will. The Washington Post can be commended for digging for this story. In doing so, they have avoided the run-of-the-mill stereotypes of a what a Mormon is and, instead, given their audience a glimpse not only into whom Romney is, but what Latter-day Saints are.

This Romney who served, counseled the heart broken, found jobs for the unemployed and worked so hard for the benefit of his congregation is a Mormon, the kind of Mormon we recognize because he’s just living out the teachings that we embrace.