Murder by the Way is a Roller Coaster Surprise | Meridian Magazine

Murder by the Way is a Roller Coaster Surprise 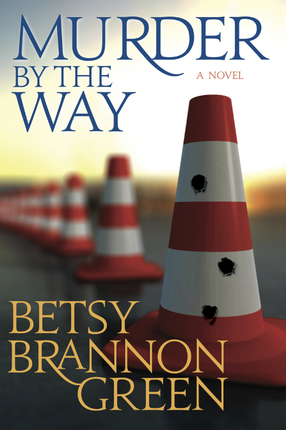 Murder by the Way is Betsy Brannon Green’s third book in the Kennedy Killingsworth series and I believe the best one yet. It begins with a sad, but funny, dilemma when Luke is notified the day before Kennedy and Luke’s wedding that he has been reactivated into the Marine Corp to testify at a trial. They move up the time of the wedding, then rush to the airport, leaving their guests to be cared for by Kennedy’s parents and sisters. The young couple has no time alone as Luke has been assigned a bodyguard who must stay with him 24/7.

Returning from the airport, Kennedy arrives just after a major accident between a car and a prison van. Her ex-husband, Cade, is the investigating officer and in his concern for the woman trapped in the car, he fails to secure the prisoners and two escape. Later he has a niggling feeling the accident wasn’t really an accident and may have been a deliberate prison escape or that the woman in the car is a murder victim. He seeks Kennedy’s help in his search for answers. Their search triggers repercussions in the form of Cade’s new bride’s jealous assumptions. Further complications arise as the city improvement group from the previous book arrives back in town to finish the project they abandoned earlier and Sloan, the construction manager and former FBI agent, moves into the office below Kennedy’s apartment and makes himself a little too at-home in her apartment.

Kennedy’s mother and several neighborhood busybodies keep the action stirred up and drive Kennedy nuts. She misses Luke and is frustrated to be in contact only by phone or text when they should be on their honeymoon and with Sloan and Drake back in town she’s a bit uncomfortable that they seem to forget she’s now a married woman. The accident investigation turns into a murder investigation involving several jurisdictions. Miss Eugenia and her FBI neighbor get involved and it becomes clear lives are in danger.

Green has a charming style that is pure Southern. Dialog and inner thoughts are so realistic the reader can’t help grinning at times. And where but in Southern regional fiction or an old fashioned Regency can one find good manners taking a prominent role in the action? The characters are distinct personalities and quickly endear themselves to the reader, even the aggravating ones. Kennedy shows more growth in this volume than in the previous volumes as she at last comes to terms with her ex-husband, her parents, and her own weaknesses.

The plot is a fast-paced roller coaster ride that keeps the reader turning pages. Suspects come and go–and sometimes come again. There’s a great deal of humor which makes some of the dangerous twists that much more chilling and unexpected. I was struck by the sharp contrasts Green portrays in characters who rise above expectations and the depths of depraved evil to which some shrink.

The background effortlessly reveals Green’s own Southern roots and her knowledge of the small regional towns, the culturally important social elements, local flora and fauna, and all else that enriches and reveals this part of the world. She also has her finger on the role religion and food play in the lives of communities such as Midway, Georgia. She even includes the recipes for a few of the dishes mentioned in the story.

Green lives in Bessemer, Alabama, a suburb of Birmingham. She and her husband have been married thirty-two years and have eight children, a daughter-in-law, and three sons-in-law along with eight grandchildren. She works for the Hueytown Elementary School, teaches Sunday School, and is kept busy running to her children and grandchildren’s school and sporting events. Murder By the Way is her seventeenth book and she has short stories published in several anthologies. Several of her books have been Whitney finalists.