Clayton Christensen: How Will You Measure Your Life? | Meridian Magazine

Clayton Christensen: How Will You Measure Your Life? 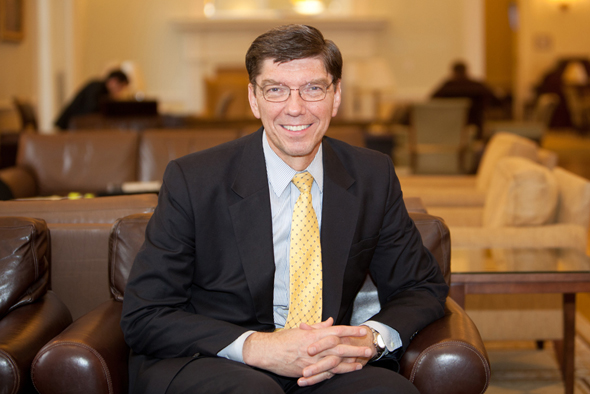 Clayton Christensen, the celebrated author and professor at the Harvard Business School, is so used to reporters interviewing him for major national newspapers and magazines, that he happily chats with them not only about his seven books, including the famous The Innovator’s Dilemma, but his son’s college basketball team, his family photos and his LDS faith.

In fact, the former Area Seventy, named in 2011 as one of the world’s most influential business thinkers, also insists on sharing with the journalists his faith, his prayers and how he came to know for himself that the Church is true. If they want to profile him, they have to know this about him, too.

That’s why, for instance, in the May 14th The New Yorker, the profile on him shared this experience from his time at Oxford University, where being a Mormon was turning out to be extremely inconvenient.

“Each night at eleven,” reported the magazine, “he knelt down and told God out loud that he needed to know whether the Book of Mormon was true. After praying, he sat and read one page, and then he stopped and thought about it. Then he knelt and prayed out loud again, asking God to tell him whether the book was true. Then he read another page. He did this for an hour each night for many weeks.”

Christensen said, “One evening in October, 1975 as I sat in the chair and opened the book following my prayer, I felt a marvelous spirit come into the room and envelop my body. I had never before felt such an intense feeling of peace and love. I started to cry, and did not want to stop. I knew then, from a source of understanding more powerful than anything I had ever felt in my life, that the book I was holding in my hands was true.”

That kind of LDS faith expression may have never appeared in The New Yorker before, but the innovative Christensen does not shy from treading into new territory.

The Sad Tale of Class Reunions 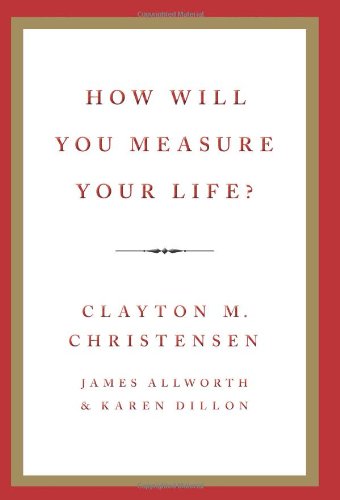 His latest best-selling book, called How Will You Measure Your Life?, is based on a series of observations he made at the reunions of his Harvard Business School classmates. At his fifth-year reunion, Clayton looked around thinking that everyone looked so polished and prosperous that “we couldn’t help but feel that we really were part of something special.”

His classmates were doing extremely well. They had great jobs, traveled to exotic locations and married “spouses much better looking than they were. Their lives seemed destined to be fantastic on every level.”

By the tenth anniversary, things looked different. Among these best and brightest, several were clearly unhappy. “Behind the faade of professional success, there were many who did not enjoy what they were doing for a living. There were, also, numerous stories of divorces or unhappy marriages,” said Christensen. One classmate hadn’t talked to his children for years. Another was on her third divorce.

What disturbed him was that these were not just extremely capable people, but really decent people, too. Yet something had gone terribly wrong for them.

To make matters worse, among his classmates was Jeffrey Skilling, who had landed in jail for his role in the Enron scandal. What had sent this man in the wrong direction?

These personal dissatisfactions, family failures, professional struggles and even criminal behavior were not just with Christensen’s Harvard classmates. He saw the same thing among his classmates at Oxford. Even with professional success, many were clearly unhappy.

Christensen directed his students in the study of theories about why and how problems and opportunities emerge in businesses. On the last day of class, he took the discussion a step further and had them examine their personal lives and dreams. Applying business theories to their personal lives, he asked them not just what they hoped would happen, but what they predict will happen in their lives based on their decisions and choices.

How can I be sure that

-I will be successful and happy in my career?

-My relationship with my spouse, my children, and my extended family and close friends become an enduring source of happiness?

-I live a life of integrity-and stay out of jail.

How Will You Measure Your Life?, co-authored with James Allworth and Karen Dillon seeks to use business theory to answer those questions, dispensing its advice based on research done at Harvard Business School and other leading institutions that has been rigorously tested in organizations of all sizes around the world to ground its wisdom. “Good theory helps people steer to good decisions-not just in business, but in life, too.”

He says, “Solving the challenges in your life requires a deep understanding of what causes what to happen.”

Each of these three areas mentioned here-career, relationships and integrity-are discussed in many chapters in the book.

The Balance of Calculation and Serendipity

So, how do you find happiness in your career? Christensen says you have to have a strategy about what you want to achieve and how you will get there. Some people know what they want when they are ten-years old and never vary. Some people have definite five-year plans.

He says high achievers put pressure on themselves to do exactly this. “Underlying this belief,” he said, “is the implicit assumption that they should risk deviating from their vision only if things go horribly wrong.”

Christensen says, “We have intentions for our careers. Against those intentions, opportunities and threats emerge that we haven’t anticipated…Among those are almost always better options than were contained in our original plans.”

When you are pursuing a deliberate strategy, the challenge is to know when and how to take advantage of unanticipated opportunities. These will fight with your deliberate plan for attention, time and capital.

Therefore, a career strategy, he says, is not a discrete, settled decision or event, but a “continuous, diverse, and unruly process.”

He uses his own life as an example of balancing the emergent and the deliberate. He has had three careers, first working as a consultant, then an entrepreneur, and finally as an academic.

When he was a college freshman, he decided he wanted to be editor of the Wall Street Journal, a newspaper he deeply admired. He combined his good writing skills with the study of economics, hoping to put himself in a position for a job there. At the end of his year at the Harvard Business School, he applied for a summer position there and didn’t get a reply.

Crushed, thinking his deliberate plan had gone awry for the time being, he received an offer for a consulting job. This was his emergent strategy, and he worked for five years at this job.   However, just as he was ready to step back and start his real career as a journalist, a friend asked him to start a company with him.

This company went well, but a venture capitalist bought enough shares to put his own CEO in the top job and Christensen was fired.

He said, “I didn’t know it at the time, but this triggered stage three of my emergent strategy.”

At 37, Christensen went back to get his Ph.D and finally became a professor at the Harvard Business School, a job he has loved for twenty years.

On making a career strategy, Christensen advises, “What we can learn from how companies develop strategy is that although it is hard to get it right at first, success doesn’t rely on this. Instead, it hinges on continuing to experiment until you do find an approach that works. Only a lucky few companies start off with the strategy that ultimate leads to success.” That’s true with people, too.

Finding Happiness in Your Relationships

The biggest bulk in the book is dedicated to finding happiness in your relationships. Christensen says that while it is tempting to invest every extra hour and ounce of energy in an activity that gives the most immediate evidence that we’ve achieved something, there is much more to life than career flash and advancement.

He says, “Investing our time and energy in raising wonderful children or deepening our love with our spouse often doesn’t return clear evidence of success for many years. What this leads to is over investing in our careers and under investing in our families-starving one of the most important parts of our life of the resources that it needs to flourish.”

“You have to make sure that you allocate your resources in a way that is consistent with your priorities.”

Christensen says it is easy to stay at work, solving a problem that will give you a short-term high, while ignoring family members who are just always there, but that is a life strategy that leads to failure. He says, “When it seems like everything at home is going well, you will be lulled into believing that you can put your investments in these relationships on the back burner. That would be an enormous mistake.”

Take time, Christensen advises to figure out your life’s purposes. Decide who you want to become and then develop a strategy that will work to get you there. Understand the metric by which your life will be measured.

Throughout the book, Christensen uses the theory behind what makes businesses succeed or fail as the primary teaching tool, but in the end he gets personal.

He had cancer, and just when that was in remission, he suffered an ischemic stroke. A clot lodged itself in the part of his brain where writing and speaking are formulated just as he started this book. “Since that day, I’ve been working to learn to speak again, one word at a time,” he said, but he had strength in these bleakest of hours because he had figured out his purpose in life and how to measure that. ‘

He says, “I promise my students that if they take the time to figure out their life’s purpose, they’ll look back on it as the most important thing they will ever have discovered.” He makes the same promise for the readers of his book, asking “How will you measure your life?”

Clayton Christensen is the Kim B. Clark Professor at Harvard Business School, the author of seven books, a five-time recipient of the McKinsey Award for Harvard Business Review’s best article, and the cofounder of four companies, including the innovation consulting firm Innosight. In 2011 he was named the world’s most influential business thinker in a biennial ranking conducted by Thinkers50. His latest bestseller is called How Will You Measure Your Life?.