Religious Freedom Goes to the Movies 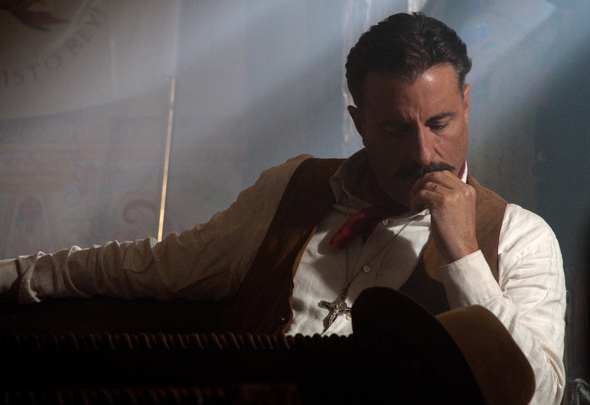 Meridian has a policy not to review nor recommend “R” rated movies. Many PG-13 movies are also off-limits to us as we seek after the praiseworthy, virtuous and of good report. Why then would we point you toward  For the Greater Glory, a film rated “R” that opens June 1st? This film has neither bad language nor sexual immorality. It earned its rating because the film portrays war violence including lynched Christians hanging from poles and Catholic priests facing the same fate. In keeping with our theme of religious freedom this week on Meridian, we review this film because it is about what can happen when religious freedom is stolen and conscience is trampled.

If you’ve never heard of the Cristero War that happened between 1926-1929 in Mexico, you are in good company. A war ignited by the government’s repression of religion that left 90,000 dead has been buried in time, left under wraps by decades of a one-party rule in Mexico. The winners write history, and this war has been locked in closets or conveyed in whispers-until now. 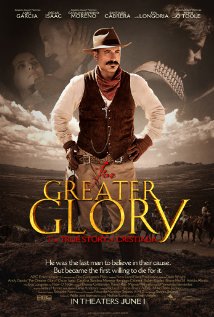 For the Greater Glory, a new film, reveals the riveting story of what happened when newly elected Mexican President Plutarco Calles, hoping to expand his government’s power, cracked down on the Catholic Church. In June of 1926, he enacted a series of laws that allowed him to seize church properties, close convents and religious schools across the nation, and exile priests.

Priests and nuns, who were already denied the right to vote, could now be heavily fined simply for wearing church attire. They could go to jail merely for exercising their right to speech.

Church doors were closed and people were stripped of their right to worship. It was President Calle’s expression of his leftist ideology, a way of branding church goers as dangerous zealots who would undermine his power and cow the people into submission.

At first the Catholic faithful responded with petitions. When those failed, they turned to an economic boycott, but all proved fruitless under the government’s determination to stamp out worship.

Finally, with no other recourse, many turned to armed resistance, and a civil war was ignited led by farmers, artisans and students, who had meager resources of ammunition and food, while the government forces were heavily armed and well supplied. Priests were hung or gunned down by firing squads by the government and with each atrocity, the opposition grew.

Many thought the uprising would be easily suppressed by federal troops, but the rebels were fired by a better cause and they repeatedly stunned the government with successful raids and savvy tactics.

In a world where too many movies are merely mental junk food, For the Greater Glory, carried off with superior skill by producer Pablo Barroso, director Dean Wright and an all-star, multi-national cast including Andy Garcia, Eva Longoria and Peter O’Toole has some meat and asks serious questions.

What price are you willing to pay for freedom? Is that price ever too high? Why does the maintaining of freedom have to come with such a cost?

As the repression intensifies for the religious, each of the characters in the film has to confront these questions and ordinary lives are transformed by extraordinary conviction about the worth of religious freedom. The battle is outside, but it is inside as well.

Father Christopher, played by Peter O’Toole, is a man of peace, who becomes an enemy of the government simply by staying in his church and doing his duty.

Father Reyes Vega is a priest who has decided to join the Cristeros and fight-but at a heavy price.

General Gorostieta, played by Andy Garcia, is the retired military genius who has gone on to become a soap maker. When the renegades ask him to lead the Cristero Army, the agnostic general does not share their cause, but decides to fight for the liberty of others and finds a path to spiritual transformation.

This man who has joined reluctantly becomes the resistance’s most inspiring and self-sacrificing leader, as he sees the price religious persecution afflicts on his countryman.

Against impossible odds and a ruthless government, he forges the Cristeros into a formidable powerhouse. 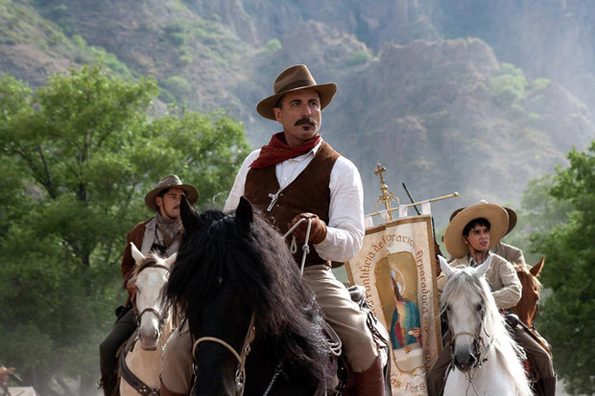 At one point in the film, General Gorostieta, sits on a horse before his army and gives a speech that sounds exactly like it came out of the mouth of Captain Moroni from the Book of Mormon. His own conviction solidifying, he tells his rag-tag army that they are fighting for their freedom and their homes and their wives and their families. It is a moving moment that made the Book of Mormon moment, even more vivid.

Then, of course, there’s 13-year-old Jose, who holds the flag during this speech. He is too young to be a part of this army, but he has also seen too much to stay away. Under the most grueling persecution, he refuses to renounce his faith.

Producer Pablo Barroso said, “This is a part of history that was too long hidden. What really drew my attention is that this is a real story, a story about real people who stood up not only for the freedom to worship and the freedom to assemble but the freedom to be-and also about how that changed a whole continent. It’s such a powerful story and yet it is hard to believe that this happened less than 100 years ago and today almost nobody knows about it.”

What intrigues about this film is that it is an epic story that puts a human face on religious persecution, telling the story in a way that becomes inscribed in your mind. The war violence is accurate and sometimes disturbing. The Catholics hanging dead by the train tracks is a re-creation of actual events. Some characters who matter to the viewers don’t end up with happily ever after stories. Yet the film is a powerful portrayal of the human heart and how tyranny seeks to trample religion. More important, it portrays characters who rise above themselves for a noble reason.

In 1929, for the first time in three years, Mexicans woke up to hear church bells.

Here is a preview:

Thanks for writing this review. The subject matter is important and needs to be part of the great conversation.