Children’s Questions: The Hidden Meanings An Excerpt from Between Parent and Child 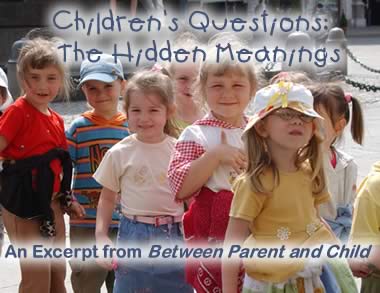 (And don’t miss last week’s article: Haim Ginott Returns, a review of perhaps the best parenting book in the world. )

The Code of Communication:Parent-Child Conversations

Conversing with children is a unique art with rules and meanings of its own. Children are rarely naive in their communications. Their messages are often in a code that requires deciphering.

Finally it occurred to Andy’s father that his son was concerned not about a social problem, but about a personal one. Andy’s questions stemmed not so much from sympathy for abandoned children as from fear of being abandoned. He was looking not for a figure representing the number of deserted children, but for reassurance that he would not be deserted.

Thus his father, reflecting Andy’s concern, answered, “You’re worried that your parents may someday abandon you the way some parents do. Let me reassure you that we will not desert you. And should it ever bother you again, please tell me so that I can help you stop worrying.”

On her first visit to kindergarten, while her mother was still with her, Nancy, age five, looked over the paintings on the wall and asked loudly, “Who made these ugly pictures?” Nancy’s mother was embarrassed. She looked at her daughter disapprovingly, and hastened to tell her, “It’s not nice to call the pictures ugly when they are so pretty.”

The teacher, who understood the meaning of the question, smiled and said, “In here you don’t have to paint pretty pictures. You can paint mean pictures if you feel like it.” A big smile appeared on Nancy’s face, for now she had the answer to her hidden question, “What happens to a girl who doesn’t paint so well?”

Next Nancy picked up a broken fire engine and asked self-righteously, “Who broke this fire engine?” Her mother answered, “What difference does it make to you who broke it? You don’t know anyone here.”

Nancy was not really interested in names. She wanted to find out what happened to children who break toys. Understanding the question, the teacher gave an appropriate answer: “Toys are for playing. Sometimes they get broken. It happens.”

Nancy seemed satisfied. Her interviewing skill had netted her the necessary information: This grown-up is pretty nice, she does not get angry quickly, even when a picture comes out ugly or a toy is broken, I don’t have to be afraid, it is safe to stay here. Nancy waved good-bye to her mother and went over to the teacher to start her first day in kindergarten.

Carol, age twelve, was tense and tearful. Her favorite cousin was going home after staying with her during the summer. Unfortunately, her mother’s response to Carol’s sadness was neither empathic nor understanding.

CAROL (with tears in her eyes): Susie is going away. I’ll be all alone again.

CAROL: I’ll be so lonely.

MOTHER: You’ll get over it.

MOTHER: You’re twelve years old and still such a crybaby.

Carol gave her mother a deadly look and escaped to her room, closing the door behind her. This episode should have had a happier ending. A child’s feelings must be taken seriously, even though the situation itself is not very serious. In her mother’s eyes a summer separation may be too minor a crisis for tears, but her response need not have lacked sympathy. Carol’s mother might have said to herself, “Carol is distressed. I can help her best by showing that I understand what pains her. How can I do that? By reflecting her feelings to her.” Thus she would have said one of the following:

“It will be lonely without Susie.”

“You miss her already.”

“It is hard to be apart when you are so used to being together.”

“The house must seem kind of empty to you without Susie around.”

When we genuinely acknowledge a child’s plight and voice her disappointment, she often gathers the strength to face reality.

Seven-year-old Alice had made plans to spend the afternoon with her friend Lea. Suddenly, she remembered that her Brownie troop met that afternoon. She started to cry.

MOTHER: Oh, you’re disappointed. You were looking forward to playing with Lea this afternoon.

ALICE: Yes. Why can’t the Brownies meet another day?

The tears stopped. Alice called her friend Lea and made another appointment. She then proceeded to change her clothes and get ready for her Scout meeting.

Alice’s mother’s understanding and sympathizing with her daughter’s disappointment helped Alice deal with life’s inevitable conflicts and disappointments. She identified Alice’s feelings and mirrored her wishes. She did not make light of the situation. She did not say: “Why do you make such a fuss! You’ll play with Lea another day. What’s the big deal?”

She deliberately avoided cliches: “Well, you can’t be in two places at the same time.” She neither accused nor blamed: “How come you made plans to play with a friend when you know that Wednesday is Brownie day?”

The following brief dialogue illustrates how this father reduced his son’s anger by simply acknowledging his feelings and complaint.

When David’s father, who has the night shift and takes care of the home while his wife works during the day, returned home from shopping, he found his eight-year-old in an angry mood.

FATHER: I see an angry boy. In fact, I see a very angry boy.

DAVID: (very quietly) I missed you. You’re never home when I come home from school.

FATHER: I’m glad you told me. Now I know. You want me to be home when you come home from school.

David hugged his father and went out to play. David’s father knew how to change his son’s mood. He did not become defensive by explaining why he wasn’t home: “I had to go shopping. What would you eat if I did not buy food?” He did not ask: “Why are you so angry?” Instead, he acknowledged his son’s feelings and his complaint.

Most parents are unaware that it is futile to try to convince children that their complaints are unjustified, their perceptions erroneous. It only leads to arguments and angry feelings.

HELEN: I know you’ll be disappointed. I only got a B on my test. I know how important it is for you that I get an A.

MOTHER: But I really don’t care. How can you even say such a thing? I’m not at all disappointed in your grade. I think a B is fine.

HELEN: Then why do you always yell at me when I don’t get an A?

MOTHER: When did I yell at you? You’re disappointed, so you’re blaming me.

Helen started to cry and ran from the room. Even though Helen’s mother understood that her daughter blamed her instead of acknowledging her own disappointment, pointing this out to her and arguing with her did not make her feel any better. Helen’s mother would have been more helpful had she acknowledged her daughter’s perception by saying: “You wish your grades were not that important to me. You want to be the one who decides what is a good grade for you. I see.”

Not only children but even strangers appreciate our sympathetic understanding of their difficulties. Mrs. Grafton related that she dislikes going to her bank. “It’s usually crowded and the manager looks and acts as if he’s doing me a favor just being there. Whenever I have to approach him I become tense.” One Friday she had to get his signature on a check. She was getting upset and impatient as she listened to his manner with others. But then she decided to try to put herself in his place and express her understanding by reflecting and acknowledging his feelings. “Another difficult Friday! Everyone’s demanding your attention. It isn’t even noon. I don’t know how you manage to get through the day.” The man’s face lit up. For the first time she saw him smile. “Oh, yes, it’s always busy here. Everyone wants to be taken care of first. And what can I do for you?” He not only signed the check, but walked with her to the teller to process it more quickly.

Parents are frustrated by dialogues with children because they lead nowhere, as illustrated by the famous conversation “Where did you go?” “Out.” “What did you do?” “Nothing.” Parents who try to be reasonable soon discover how exhausting this can be. As one mother said, “I try to reason with my child until I am blue in the face, but he doesn’t listen to me. He only hears me when I scream.”

Children often resist dialogues with parents. They resent being preached to, talked at, and criticized. They feel that parents talk too much. Says eight-year-old David to his mother, “When I ask you a small question, why do you give me such a long answer?” To his friends he confides, “I don’t tell my mother anything. If I start in with her, I have no time left to play.”

Our everyday language is not adequate for communicating meaningfully with children. To reach children and to reduce parental frustration, we need to learn a caring way of conversing with them.