There's No Right Way to Do a Wrong Thing | Meridian Magazine

There’s No Right Way to Do a Wrong Thing 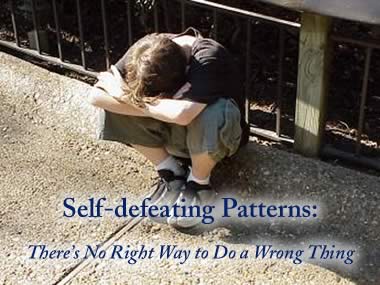 An Excerpt from Between Parent and Child

Certain patterns of relating to children are almost always self-defeating; not only do they fail to attain our long-term goals, but they often create havoc at home here and now. The self-defeating patterns include threats, bribes, promises, sarcasm, verbal overkill, sermons on lying and stealing, and rude teaching of politeness.

To children, threats are invitations to repeat a forbidden act. When a child is told, “If you do it once more,” he does not hear the words “if you.” He hears only “do it once more.” Sometimes he interprets it as, Mom expects me to do it once more, or she’ll be disappointed. Such warnings-fair as they may seem to adults-are worse than useless. They make sure that an obnoxious act will be repeated. A warning serves as a challenge to the child’s autonomy. If he has any self-respect, he must transgress again, to show to himself and to others that he is not afraid to respond to a dare.

Oliver, age five, kept on throwing a ball at the living room window in spite of many warnings. Finally his father said, “If the ball hits the window once more, I’ll beat the living daylights out of you. I promise.” A minute later, the crash of breaking glass told Oliver’s father that his warning had an effect: The ball had hit the glass for the last time. The scene that followed this sequence of threats, promises, and misbehavior can easily be imagined. In contrast, the following incident is an illustration of effective handling of misbehavior without resorting to threats.

Peter’s mother did what she felt had to be done to protect the baby and at the same time uphold her standards of acceptable behavior. Her son learned the consequences of his actions without any damage to his ego. The implied alternatives were obvious: to shoot at the target or to lose the privilege of having the gun. In this incident, his mother avoided the usual pitfalls. She did not embark on the predictable trail to failure: “Stop it, Peter! Don’t you know better than to shoot at your brother? Don’t you have a better target? If you do it once more, you hear, once more, you’ll never see the gun again!” Unless the child is very meek, his response to such an admonition will be a repetition of the forbidden. The scene that would then follow need not be described-it can easily be reconstructed by every parent.

Similarly self-defeating is the approach that explicitly tells a child that if he will (or will not) do something, then he will get a reward:

This “if-then” approach may occasionally spur the child toward an immediate goal. But it seldom, if ever, inspires her toward continual efforts. Our very words convey to her that we doubt her ability to change for the better. “If you learn the poem” means “We are not sure you can.” “If you stop wetting” means “We think you can control yourself but you won’t.”

There are also some moral objections to rewards that are used to bribe. Some children purposely misbehave in order to get their parents to pay them to behave better. Such reasoning may soon lead to bargaining and blackmail, and to ever-increasing demands for prizes and fringe benefits in exchange for “good” behavior. Some parents have been so conditioned by their children that they do not dare come home from a shopping trip without a present. They are greeted by the children not with a “Hello,” but with a “What-did-you-bring-me?”

Rewards are most helpful and more enjoyable when they are unannounced in advance, when they come as a surprise, when they represent recognition and appreciation.

Promises: Why Unrealistic Expectations Cause Grief for Everyone

Promises should neither be made to, nor demanded of, children. Why such a taboo on promises? Relations with our children should be built on trust. When parents must make promises to emphasize that they mean what they say, then they are as much as admitting that their “unpromised” word is not trustworthy. Promises build up unrealistic expectations in children. When a child is promised a visit to the zoo, she considers it a commitment that the day will not be rainy, that the car will be in the garage, and that she will not be sick. Since life is not without mishaps, however, children come to feel betrayed and convinced that parents cannot be trusted. The relentless complaint “But you promised!” is painfully familiar to parents who belatedly wish they had not.

Promises about future good behavior or the cessation of past misbehavior should not be requested or extracted from children. When a child makes a promise that is not her own, she draws a check on a bank in which she has no account. We should not encourage such fraudulent practices.

Sarcasm: A Sound Barrier to Learning

A serious mental health hazard is a parent with a gift for sarcasm. A wizard with words, that parent erects a sound barrier to effective communication:

“How many times must I repeat the same thing? Are you deaf? Then why don’t you listen?”
“You are so rude. Were you brought up in a jungle? That’s where you belong, you know.”
“What’s the matter with you, anyhow? Are you crazy or just stupid? I know where you’ll end up!”

Such a parent may not even be aware that the remarks are attacks that invite counterattacks, that such comments block communication by stirring children to preoccupation with revenge fantasies. Bitter sarcasm and cutting clichs have no place in child upbringing. It is best to avoid statements such as “What makes you think you know all the answers? You don’t even have the brains you were born with. You think you’re so smart!” Wittingly or unwittingly, we should not deflate the child’s status in his own eyes and in the eyes of his peers.

Authority Calls for Brevity: When Less Is More

To be told “You talk like a parent” is not a compliment, because parents have a reputation for repeating themselves and overstating the obvious. When they do, children stop listening with a silent cry: “Enough already!”

Every parent needs to learn economical methods of responding to children, so that minor mishaps do not turn into major catastrophes.

The following episode illustrates the triumph of a brief comment over a long explanation.

As Al’s mother was saying good-bye to visitors in the driveway, eight-year-old Al ran up with a long tearful complaint against his older brother: “Whenever I have a friend over, Ted finds an excuse to tease us. He never leaves us alone. You have to stop him.”

In the past, Al’s mother would have yelled at Ted: “How many times do I have to tell you to leave your brother alone? So help me, if you don’t, I’m going to ground you for a month.”

This time she looked at Ted and said, “Ted, you choose. You can get the usual lecture or take care of the complaint yourself.” Ted laughed and answered, “Okay, Mom, I’ll bug off.”

ruth, age eight: Mommy, did you know that junior high school is the school of romance?
mother: Oh?
ruth: Yes, the boys and girls have parties all the time.
mother: So, you’re looking forward to junior high?
ruth: Oh, yes!

In the past Ruth’s mother related she would have lectured her daughter about wasting her time; that school is for learning, not romancing; and that she was altogether too young to think about such things. Long arguments and a spoiled mood would have followed. Instead she acknowledged her daughter’s desire.

Often an ounce of humor is worth a ton of words. Twelve-year-old Ron saw his mother unload fresh fruit from the shopping cart, which she usually left on the kitchen counter. With a wry smile he said, “Do something right for once, Mom, and put the fruit in the refrigerator.”

“I did something right once. I produced you,” his mother replied. “Now help me put the fruit in the refrigerator.” Ron started chuckling and helping.

How easy it would have been for Ron’s mother to have started a war of words: “What do you mean, Do something right! Who do you think you are to talk to your mother like that?” Instead she expressed her authority with humor and brevity.

A father related how delighted he was to hear his child use humor to diminish frustration and rage. The day before Christmas he and his eight-year-old daughter, Megan, were trying to put together an artificial Christmas tree. It was not easy to get all the branches to fit and Megan’s father grew impatient. At last the tree was ready to be decorated. But as soon as he started to hang a star on one of the branches, the tree collapsed. Her father became furious, shouting: “I’ve had it!” Megan came over, hugged her father, and said, “Dad, right now, I bet you wish you were Jewish.”

Authority Calls for Brevity and for Selective Silence

The following incident illustrates the power of silent authority. Scott, age seven, had hurt his leg, but that did not stop him from going to a Cub Scout party that evening. The next morning he said, “I can’t go to school. My leg hurts.” His mother was tempted to answer, “If you can go to a party, you can go to school.” But she said nothing. The silence was heavy. A few minutes later, Scott asked, “Do you think I should go?” His mother answered, “You’re wondering about that.” Scott said, “Yes,” as he hurried to get dressed.