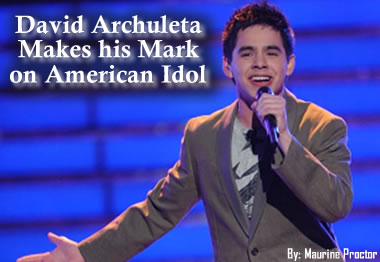 All photos are 2008 by the FOX television network, and are used here by permission.

In a high energy, glitzy finale to the 7 th season of “American Idol,” the youngest of the finalists with a powerful voice beyond his years – David Archuleta – walked away with the silver, taking second place.

Some 97and 1/2 million votes were cast from viewers across America who had become a yelling, screaming, enthusiastic fan base over the weeks that David had turned in his consistently flawless and moving performances.

More votes were cast than the entire population of Canada, Ireland, Spain and Australia and smashed the record votes of last season.

Those who loved David sometimes voted for him hundreds of times while the telephone lines following each show were still open, but it wasn’t enough to take him over the top to beat Kansas City rocker David Cook.

Finally, the contest had whittled down to David Archuleta vs. David Cook for Tuesday night – a match everybody had seen was inevitable for some time. Though David Archuleta had been an early favorite and dubbed as the most likely to win, the edgy rocker with a vibrant, gravelly voice, David Cook, had surged, and bloggers and entertainment writers were beginning to put the odds on him. 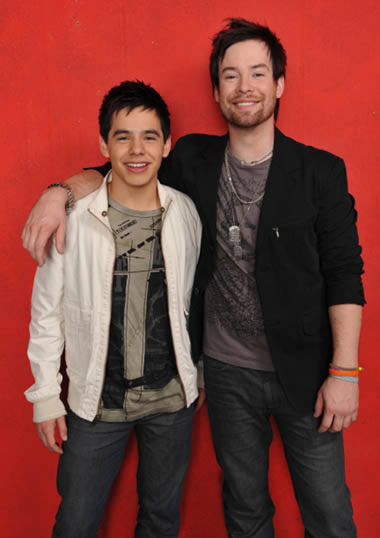 “American Idol” contenders David Archuleta and rocker David Cook on the night of the season’s last competition. Click to Enlarge.

The two-man competition, held at the Nokia Theater in Los Angeles, filled with 8,000 fans – and millions watching from home – was based on a boxing theme with three rounds. Archuleta and Cook came on stage to the Rocky theme in satin boxing robes, where they were given this tongue-in-cheek advice by judge Simon Cowell, “You’ve got to give it all you’ve got and you’ve got to hate your opponent.” 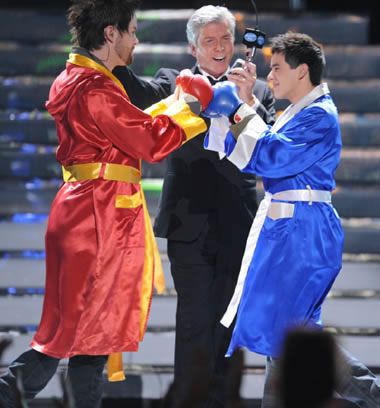 The two Davids were dressed in satin boxing robes in keeping with the Rocky theme music. It was David Archuleta who delivered the knockout performances. Click to Enlarge.

Then they were asked if there was anything they wanted to say to their opponent. Archuleta turned to Cook and said, “This guy’s awesome, and I wish him the best of luck.” 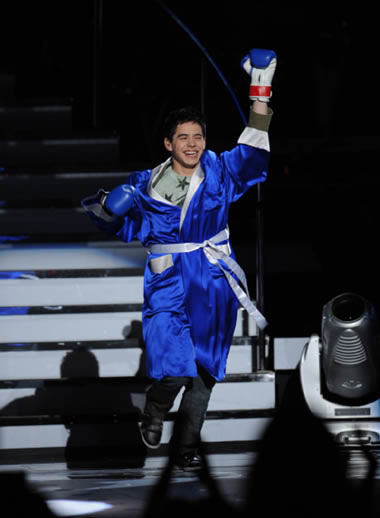 A jubilant David Archuleta enters the “ring” for the night’s competition, with his gloved hand thrusting toward the sky. Click to Enlarge.

In an interview, David said he would be honored to come in number two to Cook. All he said he wanted to do was his best. His best took him over the top in the judge’s eyes on that final night of facing off, but Cook captured some 12 million more votes to clinch the prize.

By the end of the competition, Cowell said to a tearful Archuleta, “David, you came out here tonight to win, and what we have witnessed is a knockout.” (Go to www.AmericanIdol.com to see excerpts from the competition.)

Though David is so gifted, he always shakes his head in real incredulity and awe that everyone else thinks so, too. “I can’t believe I made it this far,” he says, with an appealing and authentic vulnerability.

David had been great in his earlier performances, but it was as if a magical power descended upon him at this last competition. He controlled the stage. He sang with passion and energy that delivered to the audience, not just a beautiful song, but an experience. It was hard to believe that a high school junior from Murray High School was delivering on such a professional, moving level, and though Cook, 25, was a tough competitor with an excellent voice, he was simply blown out of the water, and his ultimate win came as a big surprise to Archuleta fans.

Mentors for the evening were dubbed as the best producer and the best song writer in the world – Clive Davis, former chief creative officer for Sony BMG Worldwide, and Andrew Lloyd Webber, creator of “Cats,” “Phantom of the Opera,” and many other of the most notable Broadway musicals. Webber advised both Davids, “You’ve got to make everyone out there feel the way you do about the song . Be brave. A faint heart never won the day. You don’t win anything if you’re not brave.”

In an earlier show, Webber had also advised David to keep his eyes open while he sang. 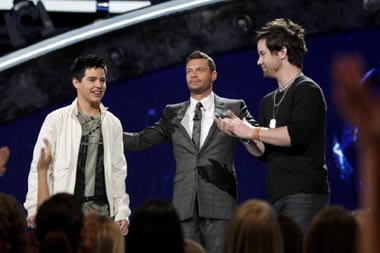 Davis chose the songs for Round One with U2’s “I Still Haven’t Found What I’m Looking For” going to Cook, and Elton John’s “Don’t Let the Sun Go Down on Me.” Judge Randy Jackson called Archuleta’s performance “flawless, and unbelievably molten hot,” saying he had “crazy vocals” while Simon said, “Round One goes to Archuleta.”

David A. could hardly hold back the tears, saying, “Thank you, thank you.” A girl in the audience waved a sign, “Marry me Archuleta.” 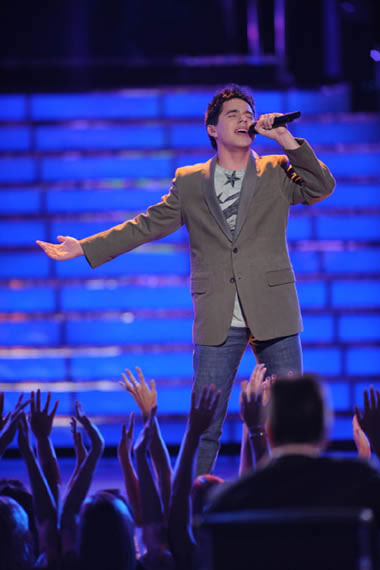 David Archuleta belts out Elton John’s “Don’t Let the Sun Go Down on Me.” Click to Enlarge.

For Round Two, the contestants got to choose what song they’d sing from the ten finalists in the American Idol songwriting competition. Although the songs were forgettable, Simon said that this round also went to Archuleta. Randy Jackson said, “You are so in the zone, you could sing the phonebook and it would be good.”

Finally, in Round Three, Archuleta and Cook chose their own music. David A. sang a mesmerizing rendition of John Lennon’s “Imagine,” a song he had sung earlier in the season. Jackson told David, “You are exactly what this show is about – finding the best singer we can find and the best singer of the season is right here.” Paula Abdul added, “You’ve left me speechless .You were stunning tonight.”

Not Only His Voice Impresses

What impressed was not only his voice, but the manner of this young Latter-day Saint, whose earnest humility, gentleness and decency were his hallmarks. Journalists called him the “beaming boy wonder.” 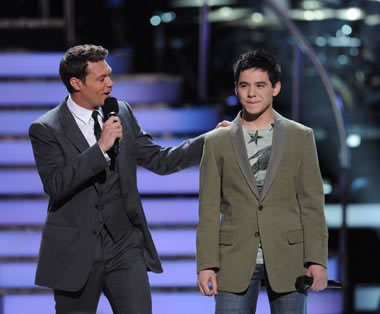 Ryan Seacrest notes that David Archuleta is holding back tears as he basks in the praise of the judges and the “American Idol” audience. Click to Enlarge.

His fellow finalists were interviewed about him, and they gushed his praises. Kristy Lee Cook said, “He is the sweetest, most kind and sincere person.” Fellow Latter-day Saint Brooke White said, “I think he’s wonderful. I would protect him with my life.” And Carly Smithson, with her Irish brogue, called him, “My little munchkin.” 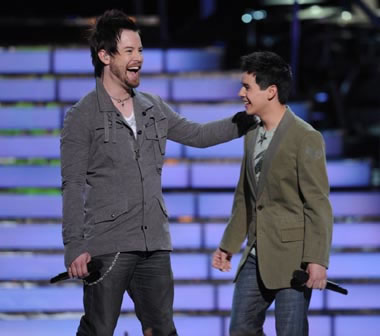 Davids Cook and Archuleta, friends despite their different backgrounds, shared a moment of exhilaration on the night of the final. Click to Enlarge.

An entertainment writer noted that the race between “post-grunge, alt-rock grit of Kansas City’s David Cook not only will make for an intriguing vocal face-off, but also an interesting study of just who watches and cares most about this cultural behemoth called Idol.

“‘Archie,’ as he has been dubbed, is the warm-and-fuzzy choice, a cute kid – “cuter than a basketful of bunnies,” one writer called him – with a sweet, old fashioned delivery that has women from 8 to 80 melting.”

In counting up the winners and losers from this season, journalist Julie Hinds, writing for the Free Press , said that the winners were “Clean-speech advocates, who appreciated the various exclamations of “gosh” uttered eight times by David Archuleta . during his visit to his hometown last week. David A. has made wholesomeness safe again for America’s youth. Don’t you just want to squeeze his head off?”

In a world where music producers try to win by pushing the envelope, making wholesomeness safe and cool for the young is no mean feat, but David has done it by being the real thing. He is as good and humble as he seems, say those who know him best.

“American Idol” is one of those rare shows that has captured the nation and created a sense of shared community. Ads for the show run to a million dollars for 30 seconds. Kids at school who hope to enter the conversation of their friends at lunch, have to keep up with the program week by week.

Everybody has an opinion on the contestants, who become like friends. Thus, even though he didn’t take the gold, David’s impact on the entire nation is tangible, and it is only the beginning. As one of the top two “Idol” winners, he will undoubtedly have an album contract and a launch for a singing career like few could get. He told his sister also that his schedule would no longer belong to him.

Some even suggested that they hoped he wouldn’t win, because they didn’t want him spoiled by fame.

Brenda Fisher, who dubs herself his number one fan and is the secretary of the Murray High School seminary, says that there is no worry about possible stardom and the love of fans ruining David. “He is the perfect example of an LDS youth,” she says. “He is showing the world what being LDS is all about. As people get to know him, they’ll learn the gospel through his words and actions. I’ve heard him bear his testimony. I’ve heard him sing his testimony. I don’t think his morals will change.”

She notes that David’s older sister, Claudia, is a senior at Murray High School, and it has been a whirlwind of a time that has been a bit difficult on her. “David texted her, ‘Just stay close to your Heavenly Father, and everything will work out.'” Brenda says that David knows that he has this musical gift and he knows it has been given to him. He recognizes the Source of his music.

David has also been going to church the entire time he’s been on “Idol,” but he admitted to his sister that he hasn’t been doing his seminary. “I’ve got a lot to catch up on,” he said.

Brenda and her husband flew to California for the “Idol” finals, and stood in line for four and one-half hours to get tickets, but she said, “It was worth it. Once we saw him perform, we forget about all the pain of standing in line. It was wonderful to watch him up there living his dream. I just love him and I’m proud of him, and I wish I could give him a big hug.” 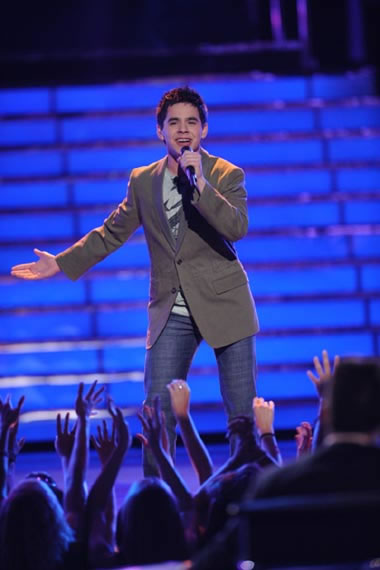 Fans wave along with the music as David Archuleta sings. Click to Enlarge.

“I’ve never heard as exquisite and melodic a singer,” Nigel Lythgoe, an executive producer for “American Idol,” said, adding that Archuleta will only improve as he gets older.

In fact, Lythgoe, who also did auditions for “So You Think You Can Dance,” is so impressed with the talent in Salt Lake City that he is going to take “American Idol” there next season for auditions.

He can expect a crowd waiting for him when he gets there. For the finales of this year’s season, throngs filled the spacious ESA where the Utah Jazz play, so they could take advantage of the Eastern “Idols” feed and find out who won an hour earlier.

Even in second place, David is “America’s most famous high school student” and finale night at his school in Utah was “the ultimate pep rally.”

Tickets went on sale last Saturday in Salt Lake for the 2008 “American Idols” Live Tour, where the show’s ten finalists will perform, and were snapped up in 20 minutes.