Stepping Stones for All Kinds of Graduates « Meridian Magazine

Stepping Stones for All Kinds of Graduates

Graduation is just around the corner and that could apply to kids and adults of all ages.  I have compiled several books that will inspire, inform and enlighten those kids who are about to enter a new phase in their lives.

Let’s begin with the books that inform.  Memories of Survival, by Esther Nisenthal Krinitaz and Bernice Steinhardt, is a most unusual picture book.  The story is about one woman’s memories of the cruelties of the Holocaust.  What makes this book so unique is that the art work is completely set in fabric.  Each picture is mostly hand stitched by Esther Krinitaz with so much detail that you forget that the scene you’re looking at is made from cloth. 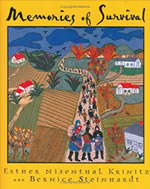 Along with these incredible pictures, the story that the author retells is from her own experiences during the most devastating extermination of Jews in the history of mankind.  For this reason, this book is for older children, ages 11 and up.  However, the story needs to be told and told again, never to be forgotten.  For this reason, Esther told her story through her talent with the stitch.  Under each pictured panel, she hand stitched the words to tell about the scene.

The story takes you through the time in Esther’s life when living in Poland as a 10-year-old was like any other child living a carefree life.  The year is 1937, and you meet the rest of her family – her older brother and 3 younger sisters.  But it doesn’t take long before Esther’s life, along with that of her family, is about to change forever!

By the seventh panel, the year is 1939 and the Nazis have arrived in her small Polish town.  The town of Mniszek is almost completely made up of Jewish families and this panel shows how a German soldier had stepped off his horse and approached Esther’s grandfather and proceeded to cut off his beard.  “They stopped in front of my grandparents’ house, where one got off his horse to rough up my grandfather and cut his beard as my grandmother screamed.”

This small, mean act is only the prelude of what’s to come.  Each panel proceeding after this event takes you deeper into the horrors of what’s about to befall Esther’s family.  Only Esther and one of her sisters survive.  And many years later she begins to stitch her memories into fabric.

Esther’s daughter, Bernice, helped with the text and introduction of this literary masterpiece.  There are so many levels and degrees of meaning and subtext in this picture book.  The scenes are rich with rural dwellings in a time long ago.  And yet, the cruelty and brutality of certain people bring a harsh reality to the pages as the Nazi Army takes over the countryside.  What remains at the end of the book is not only what we can learn from this war, but hope, courage and integrity.  This theme is why I selected this outstanding book for graduates.  If you hope for improvement in your life, these three virtues could only improve your life for a brighter future! 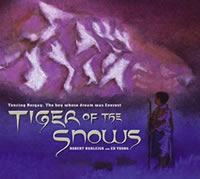 Another book to inform and inspire is Tiger of the Snows, Tenzing Norgay:  The Boy Whose Dream Was Everest, by Robert Burleigh, and beautifully painted by award winning Ed Young, is a poetic look at a brave young Sherpa boy and how he conquered the tallest mountain top.  Tenzing Norgay, along with Sir Edmund Hillary, became the first to climb Mount Everest.  It was the practice back in the middle of last century to take the local climbers along with the expeditions as the climbers attempted to reach the top.  Norgay was selected because of his expertise in climbing and his willingness to attempt the impossible.

Mr. Burleigh has written a lyrical text that emits a feeling of valor and honor as you read each page.  The steep incline becomes evident as the task as hand becomes degrees of difficulty as evident as the words are placed symbolically on the page.  “He slips and slides, / Plunges the axe and holds fast, / Gulps oxygen, like a beached fish / Strains forward on saddles of black ice, / riding the white horse higher and higher, / Up and up and up / Between Stone and Frozen Cornices.”  Somehow, the illustrator has captured the soul of this hike, and the mountain itself.

Mr. Young’s pastels seem to chip away at the heart of the jagged peaks and create an atmosphere of cold and wind.  Here is a book that is as close as you may ever get to reach the top of the highest mountain in the world.  When all ages read about this achievement, it very well could create euphoria for excellence.

I Can Make A Difference:  A Treasury to Inspire Our Children<, selected by Marian Wright Edelman, and wonderfully illustrated by Barry Moser, is a collection of simple stories with strong messages.  Here is just one of the many quotes, stories, tales and poems.  “Swimmy,” by Leo Lionni, is the story about how one little fish came up with the solution of a very big problem.  When Swimmy came upon other small fish like himself, he asked why they only stayed hidden in the rocks and weeds.  They told him that they couldn’t swim beyond the dark, “The big fish will eat us all.”  His solution was to work together in sequence to make a very big difference.  They all formed an even bigger fish which scared away their predator.  Others include “I can make a difference by persevering and not giving up,” from Watty Piper’s The Little Engine That Could and “I can make a difference by being determined and resourceful,” by Albert Schweitzer.  This book is great for all ages.

If you are looking for a simple book to teach life’s lessons for children ages 4 through 7, Cookies:  Bite-Size Life Lessons contains examples of integrity through cookies.  Amy Krouse Rosenthal wrote the text and Jane Dyer painted the wonderful pictures.  Some of the subjects include:  fairness, trustworthy and respect.

My last two books deal with the world and money.  How Much?  Visiting Markets Around the World, by Ted Lewin, is a picture book that will take you around the globe investigating the locals and their products.  You’ll even learn about the exchanges of money different from ours.  This picture book is so wonderfully illustrated you can almost hear the camels snort in Egypt and the splash of the long boat in Thailand as it winds around the river bed.  Rich Dad Poor Dad for Teens:  The Secrets about Money – That You Don’t Learn in School!, by Robert T. Kiyosaki with Sharon L. Lechter, CPA, will help you manage, make and save money that will surely last the rest of your life!  Both books are great for all ages! 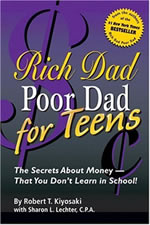 Your graduate will surely be inspired and motivated for a better life through any, or all, of these books.  Better yet, you may want to try them out for yourself!