What is the Endowment? Becoming “the Sons of Moses and of Aaron”

[Editor: This is the fifth article in a series of excepts from Jeffrey M. Bradshaw’s new book, entitled “Temple Themes in the Oath and Covenant of the Priesthood.” The book is available on Amazon.com and at selected LDS Bookstores (including Eborn Books, BYU Bookstore, the FAIR LDS Bookstore). An iBooks version is can be purchased from the Apple iBookstore, and a pdf version is available at www.templethemes.net]

What is the Endowment? Becoming “the Sons of Moses and of Aaron” 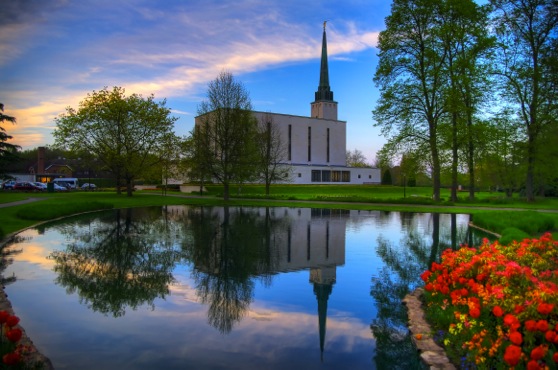 The primary sense of the word “endowment” has to do with the giving of a gift. The word “endowment” fits perfectly as a description of the ordinance whereby God bestows great gifts of knowledge and power to mankind. Elder Boyd K. Packer further explains:[2]

To endow is to enrich, to give to another something long lasting and of much worth. The temple endowment ordinances enrich in three ways: (a) the one receiving the ordinance is given power from God. “Recipients are endowed with power from on high.” (b) A recipient is also endowed with information and knowledge. “They receive an education relative to the Lord’s purposes and plans.”[3] (c) When sealed at the altar a person is the recipient of glorious blessings, powers, and honors as part of his endowment.

The word “endowment” is also closely related to the idea of putting on clothing.[4] While they were in the Garden of Eden, the nakedness of Adam and Eve signified innocence.[5] However, in mortality, nakedness symbolizes the fallen and sinful condition of those who have not yet accepted the blessings of the Atonement. While the coats of skins “covered” the direct effects of Adam and Eve’s transgression (corresponding to the idea of justification), additional clothing worn over the first garment represented their being endowed with glory, holiness, and godliness (i.e., sanctification).[6]Nibley further explains that “the white undergarment is the proper preexistent glory of the wearer,[7] while the [outer garment of the high priest] is the priesthood later added to it.”[8] 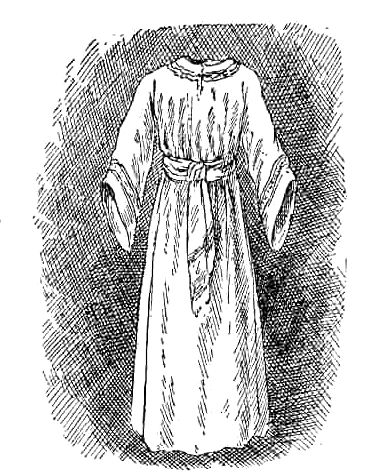 While the authority of the priesthood “comes by way of ordination; power in the priesthood comes through faithful and obedient living in honoring covenants.”[10] Similarly, it is one thing to wear white clothing as a symbol of priesthood power, and yet another to be in actuality endowed or clothed “with power from on high.”[11] Connecting the endowment of power with the idea of putting on glorious clothing is Elder James E. Talmage’s discussion of what he calls the Parable of the Royal Marriage Feast in Matthew 22. Referring to the wedding garment required of all legitimate guests at the feast, he observes:[12]

The Greek original in the mention of the wedding garment is enduma… The noun is related to the Greek verb enduein,”to put on, as a garment.”

After the guests were seated, the Lord of the feast noticed one man who was not wearing the wedding garment[13]-in other words, he had not been clothed through righteous living with actual “power from on high.”[14] Because no man could sit at the feast without the wedding garment, this man was immediately bound and “cast… into outer darkness.”[15] Though the man might have had enough knowledge to deceive the outer doorkeepers, he could not fool the Bridegroom, who knew his situation perfectly. As Nephi taught, “the keeper of the gate is the Holy One of Israel; and he employeth no servant there; … he cannot be deceived, for the Lord God is his name.”[16] The lesson the Master drew from this parable is that: “many are called, but few are chosen, wherefore all do not have on the wedding garment.”[17]

The Pathway of Exaltation

The Prophet Joseph Smith taught that a “fullness of the priesthood of God” can only be obtained “by keeping all the commandments and obeying all the ordinances of the house of the Lord.”[18] In D&C 84:34, a definite sequence of temple blessings is described in great clarity, outlining the paththat can ultimately lead to exaltation:

It is significant that this outline was given by revelation in 1832, a decade before the Prophet began to teach it in plainness to the Saints in Nauvoo. It has been generally supposed that in Kirtland the Prophet knew only a little about thetemple ordinances, and taught all of what he knew then to the Saints; and that when he got to Nauvoo the rest was revealed to him, and so he taught them something more. However, I think such a conclusion is mistaken. My study of revelations and teachings of Joseph Smith have convinced me that he knew early on much more about these matters than many have supposed, contradicting the view of those who consider the temple ordinances a late invention.[19] 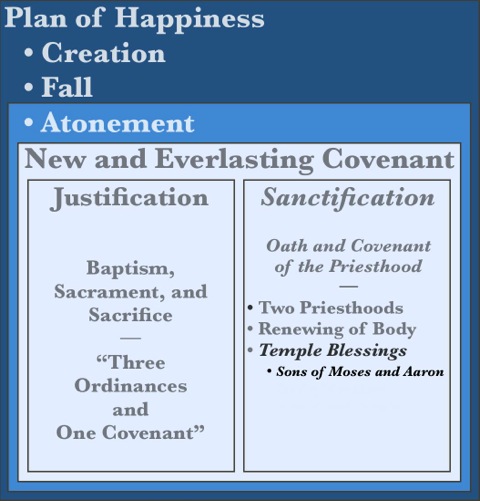 “The Sons of Moses and of Aaron”

Rightful Heirs to the Blessings of the Priesthood

With respect to the first item in the sequence, we are told in D&C 84:34 that those who receive the blessings of the priesthood:

… become the sons of Moses and of Aaron …

“Sonship denotes belonging to a family and having certain rights as a member and as an heir.”[20] Thus, as sons of Moses and Aaron, faithful priesthood holders become rightful heirs to the blessings of the greater and the lesser priesthoods respectively.[21] In similitude of Moses and Aaron, priesthood holders assist in gathering latter-day Israel and establishing them as a people of the Lord.[22] They perform temple work wherein they “offer an acceptable offering and sacrifice in the house of the Lord.”[23] 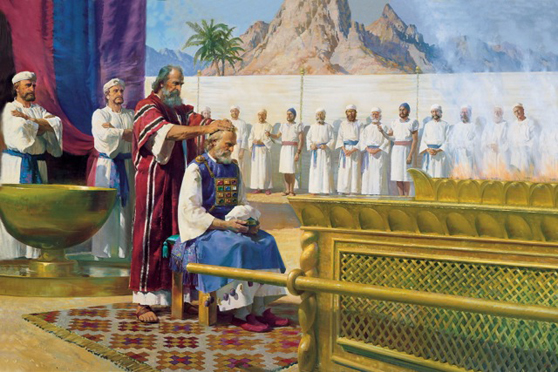 The lesser priesthood, which was “confirmed. 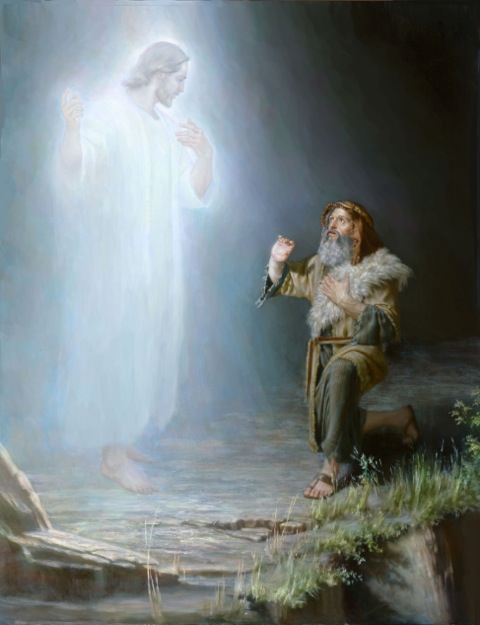 The priesthood ordinances received in the temple endowment are preparatory in nature, helping make us ready to “behold the face of God,”[30] as did Moses. Indeed, those who participate in the ordinance of the endowment are shown in ritual what Moses was shown in reality. Describing the relationship between earthly and heavenly ordinances, Elder John A. Widtsoe wrote:[31]

The earthly ordinances of the Gospel are themselves only reflections of heavenly ordinances. For instance, baptism, the gift of the Holy Ghost and temple work are merely earthly symbols of realities that prevail throughout the universe; but they are symbols of truths that must be recognized if the Great Plan is to be fulfilled. The acceptance of these earthly symbols is part and parcel of correct earth life, but being earthly symbols they are distinctly of the earth, and cannot be accepted elsewhere than on earth.

Clothed in the Robes of Righteousness

Summarizing the symbolism of clothing in the scriptures, Elder Jeffrey R. Holland wrote:[32]

In the imagery of the gospel of Jesus Christ, it is always better to be clothed than unclothed, to be robed rather than naked. Jacob taught that the wicked will have a knowledge of guilt and uncleanness that leads them to feel naked before God, whereas the righteous shall have a perfect knowledge of their enjoyment and their righteousness, “being clothed with purity, yea, even with the robe of righteousness.”[33]

As a universal gift flowing from the Atonement of Christ, the Resurrection will clothe with a permanent, perfected, restored body every spirit ever born into mortality. Furthermore, for every person who accepts the principles and ordinances of the gospel, that person’s body will be something of a robe of righteousness. Therein is the Redemption of the soul, and therein is a fullness of joy throughout all eternity, including, in its highest order, “a fullness and a continuation of the seeds forever and ever.”[34]

Links to all of the articles in this series-

Part 1 “Why Do We Participate in Temple Ordinances?”

Part 3 “Knowledge as the Principle of Salvation“

Part 4 “How Are We Physically and Spiritually Reborn in the Temple?”

Part 5 “What is the Endowment?”

Part 6  “Passing the Angels Who Stand as Sentinels“

Part 7  “The Meaning of the Atonement“

Part 8 “Becoming the Seed of Abraham”‘: The Sealing and Healing Power of Elijah

Part 9: “The Church and Kingdom”: Becoming Priests and Kings

Part 10: “The Elect of God”: What Does It Mean to Have One’s “Calling and Election Made Sure?“

Part 11: “All That My Father Hath Shall Be Given Unto Him”: Receiving the Kingdom

Part 12: The Second Comforter: “The Father Teacheth Him”

Part 13: “Weary Him Until He Blesses You”

Part 14: “What are the Three Degrees Within the Celestial Kingdom?”

Bradshaw, Jeffrey M., and Ronan J. Head. “Mormonism’s Satan and the Tree of Life (Longer version of an invited presentation originally given at the 2009 Conference of the European Mormon Studies Association, Turin, Italy, 30-31 July 2009).” Element: A Journal of Mormon Philosophy and Theology4, no. 2 (2010): 1-54.

“Work for the Dead (Extract from Rational Theology, the textbook for the Melchizedek Priesthood Classes of the Church for 1915).” The Utah Genealogical and Historical Magazine6 (1915): 33-35. (accessed February 20, 2012).

[6] Clothing received as part of temple ordinances also symbolizes the protection against evil afforded by receiving a mortal body-and later in being resurrected with a glorious body in likeness of that of the Father and the Son. The Prophet taught that “the express purpose of God in giving [His spirit children] a tabernacle was to arm [them] against the power of darkness” (J. Smith, Jr., Teachings, 19 January 1841, p. 62; cf. 2 Nephi 9:8-9). See additional discussion and citations from the teachings of the Prophet Joseph Smith in J. M. Bradshaw et al., Mormonism’s Satan; M. B. Brown, Plan, pp. 33, 47n. See also Alma 34:35 regarding the fate of the wicked in the resurrection.

When [the candidate] leaves on his earthly mission, [his garment of light or glory] is laid up for him in heaven to await his return. It thus serves as security and lends urgency and weight to the need for following righteous ways on earth.For if one fails here, one loses not only one’s glorious future in the eternities to come, but also the whole accumulation of past deeds and accomplishments in the long ages of preexistence.

In some texts the garment is kept folded beneath the throne of God, awaiting the return of the owner.Similarly, William W. Phelps asserted that those who were faithful in premortal life were given a “white stone” with a “new name,” and that they were to receive these things again when they returned to their heavenly home (Deseret News, 6, 416, cited in J. M. Bradshaw, God’s Image, pp. 299-300 n. 4-9). See D&C 130:11; Revelation 2:17.