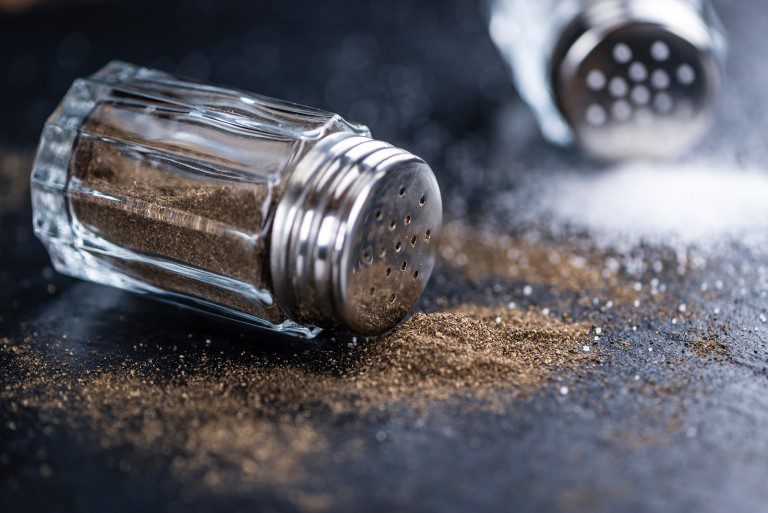 Are Differences Ruining Your Marriage?

When our daughter was very young she would take the salt and pepper shakers in restaurants, and conduct a little marriage ceremony with them. Even at age 3, she knew the pepper was the groom and the salt was the bride. Sometimes the bride even wore a little napkin veil.

And even then, I would smile at how apt this symbol really was. Salt and pepper are very different from one another, much like actual people are. Pepper is spicy, organic, and strong. Salt brings out the flavor of others, is a mineral, and is mild. Both can be overdone. Both can blend well. But without question, they are different.

Many couples fall into infatuation and marry before really analyzing how their differences will enhance—or clash—as they come together. The wonderful traits they first admired now seem exaggerated, even grating. His hilarious apologies now look like the flimsy excuses of a guy who charmed his way out of accountability all his life. Her admirable attention to detail has suddenly morphed into perfectionism and the expectation that everyone around her tow a similar line. Or his steadiness is now boring, her daring is now irresponsible.

Unfortunately, too many of us think our way is secretly the best way, and our task is to bend our spouse into conformity. We forget that we are flawed as well and that our efforts would be more wisely placed in self-improvement, rather than spouse-changing. Immaturity fuels the flame, and when our efforts to “help” don’t work, we convince ourselves we are simply incompatible.

I love the quote by Gerald N. Lund, who said, “One of the best examples of a synergistic system is found in a successful marriage. . . They join their unique talents, abilities, and spiritual gifts and create something new and profoundly different from what they could ever do individually.”

This is key to making a marriage work: We must celebrate differences and realize that the resulting blend is far better than the sum of the parts would be. We cannot become as wonderful alone as when we add the differences another person brings to the table. Differences are not to be eliminated, but sought. This doesn’t mean we throw caution to the wind and select a serial killer. Obviously we need the essentials in common (faith, attitudes about parenting, commitment to common goals). And this certainly doesn’t apply for those marriages that include an addict who won’t get help, or an abusive, mentally deranged partner.

But—in basically healthy unions– for every different quirk of personality and style your spouse has, you are blessed. Would we really make a better “whole” if we had married a mirror image? Successful businesses have learned this lesson by avoiding “groupthink,” in order to encourage diverse views that branch out from one train of thought, and allow for breakthroughs and innovation. This allows for growth and keeps them from getting stuck in a rut.

I think of the wisdom of Abraham Lincoln, surrounding himself with those who shared completely different views. Because he was confident and mature enough, he was able to listen to another perspective without feeling threatened. Unlike so many people today who only want to surround themselves with like thinkers, he saw the value in diversity.

William Wrigley, Jr. once said, “When two men in a business always agree, one of them is unnecessary.” And how can you brainstorm with only one brain? You need divergent thought, fresh angles, even opposition at times, to help you craft the best course of action.

When a couple disagrees over vital issues such as which church to attend, how money will be spent, or how children will be raised, resolution and agreement must be sought. But when we disagree over less important matters, we’d all do well to take a breath and realize how much richer our life is because we have more music in our mix.

My husband was raised in Louisiana and brought a whole new culture to our marriage. For starters, he would say reared, not raised. And he liked to leave piles of papers on the dining table, which I liked to have clear (I learned he’s a piler and I’m a filer). But I had idiosyncrasies, too. I’d sometimes get into the middle of a sentence, then (Hello, ADD) get distracted and not finish it. But these are not battles to wage; they’re steps to learn in a dance of compromise.

I belong to a book club where each member gets a turn choosing the various books we’ll read. And I have been exposed to topics and genres I never would have chosen on my own. This exposure to the unfamiliar has educated me and enriched my life. How boring it would it be if we all had exactly the same literary taste.

When someone prefers different foods than you do, a different pastime, another sport, a different way of folding the towels, or is quiet when you wish they would talk, those are moments to allow for individuality. They are not worth quarreling over. I love the older couples I observe, who watch one another with a twinkle in their eye as their spouse reveals some quirk, because they’ve learned to find that quirk endearing. They aren’t trying to correct it; they’re rejoicing in their sweetheart being themselves. And don’t we all want someone who can love us the same way?

I have a wonderful friend who is the polar opposite of her husband. She’s analytical, basically serious, and has her feet on the ground. She is the perfect companion for her highly creative, spontaneous husband. She’s a vegan, he’s a meat eater. “We basically have nothing in common,” she quips. But they have the things that matter—devotion to the Lord, love of their children, generosity to others, and respect for one another’s distinct style.

Elder N. Eldon Tanner once summed it up by saying, “It does not matter who is right, but what is right.” Next time you feel a dispute brewing, instead of trying to make your views known or be right, stop and ask what is right. What is the best choice for two people who are both dedicated to serving the Lord and honoring their covenants? Chances are, in most cases, the matter won’t even apply to this standard and isn’t worth arguing about.

Instead of stockpiling a list of ways our spouse is deficient, different, and thus unacceptable, let’s see these small dissimilarities as a plus—like salt and pepper, a wonderful ingredient in the formula that makes our marriage even better.

I would love to see articles on couples who don't have "the most important things" in common who still can be happy in marriage. There are so many people trying to make marriages work when one spouse has left the church, and there is hardly a mention of those situations, with most marriage articles saying if you both have faith and love God your marriage can succeed. It's discouraging feeling betrayed by a spouse who has left the church or never joined, and being under all the stress of trying to make things work, when all the "helpful" articles say you just need the impossible in your current situation. Please don't assume that everyone reading articles on this site is in the ideal family situation, and give a little more encouragement to those who are struggling to keep their faith and keep their marriage.