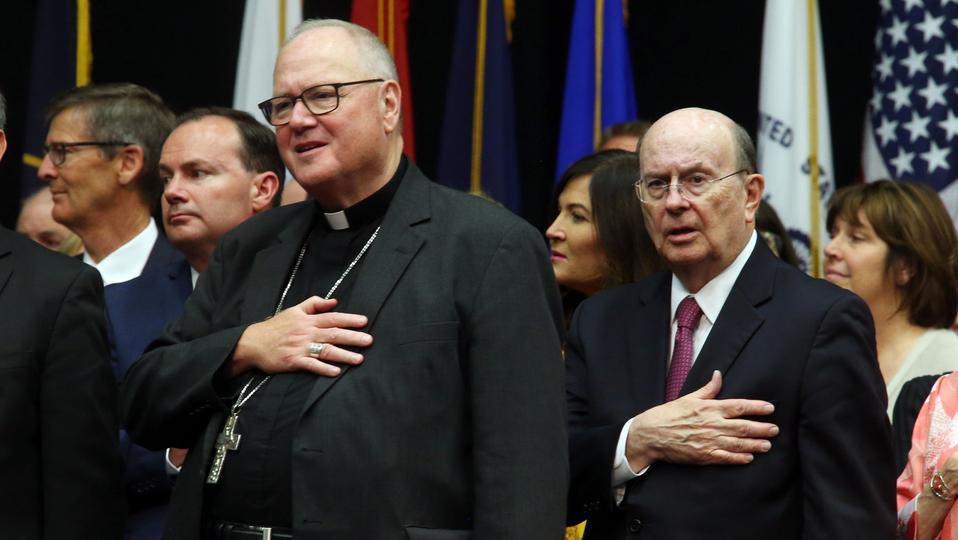 Over 3,000 people gathered at a patriotic service in central Utah Sunday evening to hear a keynote address from His Eminence Timothy Cardinal Dolan, Archbishop of New York.

“We have to remember that patriotism is a biblical virtue. … And to see people coming together — especially to see our young people — to show that we’re not alone in our love for God and country,” said Cardinal Dolan.

The patriotic service was part of America’s Freedom Festival at Provo, an annual event held around Independence Day to strengthen the traditional American values of God, family, freedom and country.

Cardinal Dolan has a long-standing relationship with leaders of The Church of Jesus Christ of Latter-day Saints, including Elder Quentin L. Cook of the Quorum of the Twelve Apostles, who introduced Cardinal Dolan to the audience at the Utah Valley University UCCU Center in Orem.

“We’re very grateful of having the opportunity to have Cardinal Dolan here,” said Elder Cook. “To have us be able to work together on things that would bless this country… whether they’re of faith a or no faith at all, has been an incredibly significant thing, as far as we’re concerned.”

Elder Cook and other Church leaders have worked closely with Cardinal Dolan on issues involving faith, family and religious freedom.

“[Religious freedom] is important for all of culture and all of society, not just for people of faith,” said Cardinal Dolan.

Elder Cook said Cardinal Dolan’s support of joint humanitarian efforts with the Church of Jesus Christ and service opportunities has brought the faith communities closer together. “He’s a bridge builder.”

In 2015, Cardinal Dolan spoke out in admiration of the faith of Elder Mason Wells of Utah, a Latter-day Saint missionary who was injured, along with several other missionaries, in a terrorist bombing at the airport in Brussels, Belgium. His comments were carried by media outlets around the world.

“He has a great personality, he has got a great sense of humor, but he’s also committed to values that are consistent with the things that we believe in as disciples of Jesus Christ,” said Elder Cook.

“We have to bring God and patriotism together. It’s a great formula for a healthy society,” said Bishop Oscar Solis of the Catholic Diocese of Salt Lake City. “Religious liberty is very essential for us, and that it is defined as the First Amendment in this country, and that is why we need to safeguard and uphold, because this is a precious gift.”

The patriotic service also included musical performances by the distinguished 23rd Army Band of the Utah National Guard and by the popular One Voice Children’s Choir.

“We just hope people go away saying I’m grateful that I live in America. I’m grateful that I have the opportunity to worship the way I desire, and that we can lock arms with other religions to make this happen,” said Paul Warner, executive director of the Freedom Festival.

The Freedom Festival culminates with a fireworks display on the Brigham Young University campus on July 4.

On Monday, His Eminence met Church President Russell M. Nelson for the first time at the Church Administration Building. During their meeting, President Nelson presented Cardinal Dolan with a statue of the Christus. The Archbishop also met Acting President of the Quorum of the Twelve Apostles, M. Russell Ballard and President Henry B. Eyring, Second Counselor in the First Presidency.

In addition, Cardinal Dolan toured Temple Square, the location of the Salt Lake Temple and the historic Tabernacle; Welfare Square, which helps those in need via a milk-processing plant, a cannery, a bakery, a Deseret Industries thrift store, a private employment office and the Church’s largest bishops’ storehouse; and the Bishops’ Central Storehouse, which stocks food and materials for humanitarian emergency response and the Church’s welfare system.

While in Salt Lake City, Cardinal Dolan also visited the Catholic Cathedral of the Madeleine. This is Cardinal Dolan’s first trip to Utah.

Cardinal Dolan was born February 6, 1950, in St. Louis, Missouri. In 2009, he was appointed Archbishop of New York by Pope Benedict XVI and, in February 2012, became a cardinal.