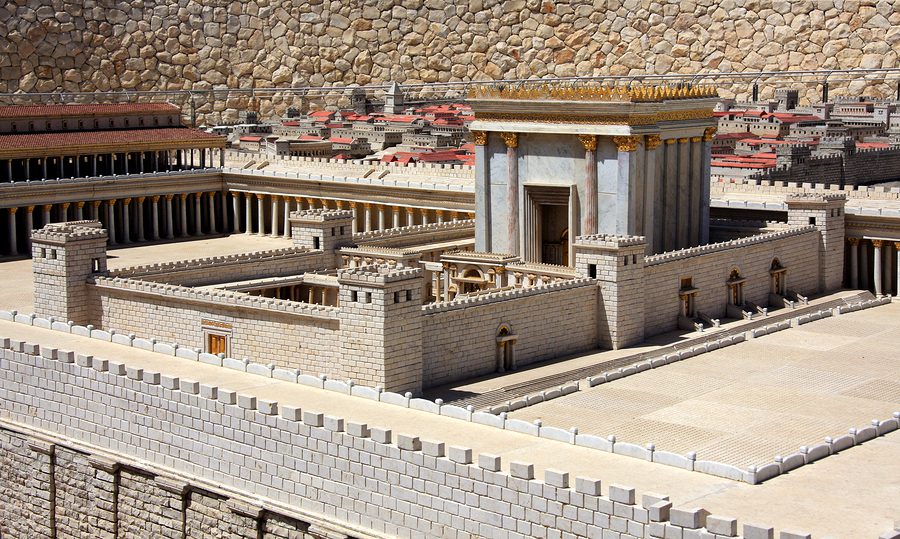 To read more for from Jeff Lindsay, visit Mormanity.

The Dec. 23 newsletter from the Biblical Archaeology Society surprised me with a report about another ancient Jewish temple outside of Jerusalem. See “A Rival to Solomon’s Temple” by Marek Dospěl (or read the full account in the Jan./Feb. issue of Biblical ArchaeologyReview).

In 2012, archaeologists made a stunning discovery: a temple within sight of Jerusalem in the period following the reign of King Solomon . Established around 900 B.C.E., and functional until the early sixth century B.C.E., this Judahite temple at Tel Moẓa defies everything we would have expected.

In article for the Biblical Archaeology Review, “Another Temple in Judah! The Tale of Tel Moza” by Shua Kisilevitz and Oded Lipschits (pp. 40-49), we read that this site at Tel Moza actually grew in importance around the time of Hezekiah and thereafter, expanding in significance in its administrative and economic roles. It had a Holy of Holies, two pillars outside the entrance, an altar for sacrifice in the exterior courtyard, and other features like Solomon’s temple. But it’s still a mystery.

Who really constructed the temple in the early ninth century B.C.E.? And were these people associated with the with the rise of Jerusalem and the emergence of the Kingdom of Judah? And how did this temple operate successfully throughout its entire lifespan, especially when the Bible makes no mention of any such temple and moreover, says all other shrines were destroyed?

All we know so far is that when it was constructed, the Moza temple was likely the undertaking of a local group, but by the Iron IIB period, it was clearly under Judahite rule and must therefore have been royally sanctioned by the realm.

Amazing, a Jewish temple operating with apparent royal sanction just outside of Jerusalem (about 4 miles away).  For many decades, a “slam dunk” argument against the Book of Mormon is that no self-respecting Israelite would dare to offer sacrifices outside of Jerusalem, much less dare to build a temple! What Lehi and Nephi did allegedly shows that Joseph was a complete biblical ignoramus. The kind of ignoramus who misses basic Bible facts that everyone knows (like Christ being born in Bethlehem, not in the “land” of Jerusalem!), only to later have archaeological evidence or other modern scholarship show that what was mocked was actually plausible after all, turning weaknesses into strengths. He was also the kind of ignoramus who manages to recognize and master chiasmus and other subtle forms of Hebrew poetry, and build dozens of apparent Hebrew word plays and Hebraisms into his text years before he could begin studying Hebrew. May we all be so ignorant.

Fortunately, strong evidence to refute the old argument against a Nephite temple outside of Jerusalem existed before this latest amplification. I’ve previously mentioned the temple-like worship site at Elephantine in Egypt. Quite an interesting story.

There’s also the temple at Arad, further outside of Jerusalem than Moza. Earlier this year, during the Chinese New Year we went with a number of friends from Shanghai to Israel and also briefly to Petra in Jordan. While there, my wife and I went to the National Museum in Jerusalem, one of many highlights of our trip, and learned about the ancient temple at Arad. It also had a Holy of Holies and was a site where sacrifices were offered. It was destroyed — or rather, gently taken apart and buried — during the reign of Hezekiah. It was not desecrated as one might expect from the Old Testament accounts of Hezekiah’s and Josiah’s reforms that centralized temple worship in Jerusalem.

One hypothesis for this apparently respectful treatment is that Hezekiah took apart the Arad temple and buried it to preserve the sacred site as the Assyrians were coming, much as the Latter-day Saints in Utah buried the ongoing work on the Salt Lake Temple when government troops were coming to possibly invade the city. In any case, the temple/shrine at Arad lends support to the notion that people like Lehi and Nephi could have dared to offer sacrifice outside of Jerusalem and even to later build a temple in the New World, just as Jews in Egypt did at Elephantine. Here are a couple of photos from the National Museum:

There are other sites of note outside of Jerusalem in ancient Israel that can also be considered. See “Israelite Temples outside Jerusalem” at the Pronaos blog.

I expect arguments about the impropriety or impossibility of sacrifices and a temple outside of Jerusalem will continue to be treated as unrefuted slam-dunks against the Book of Mormon in a variety of critical publications for years to come, but I hope the surprising evidence from multiple sites will at least open some eyes to the growing evidence that many of the “wrong” things in the Book of Mormon have become a lot less wrong over time, though there are still gaps and challenges that haven’t been so clearly resolved yet.