A Yearning Goodbye to the Boy Scouts | Meridian Magazine 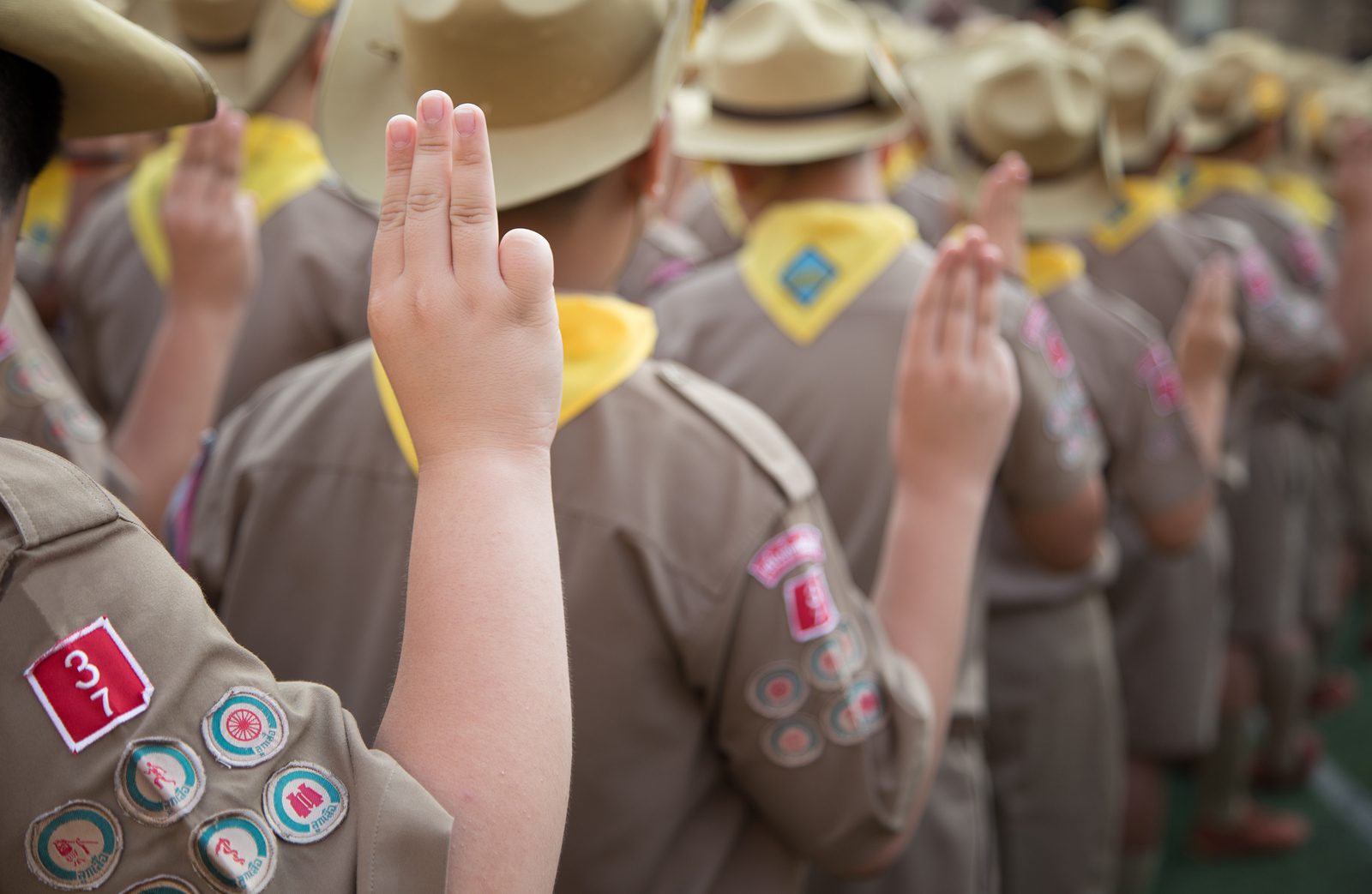 A Yearning Goodbye to the Boy Scouts

In what may have been an inevitable, but poignant parting, after 105 years of partnership, The Church of Jesus Christ of Latter-day Saints and the Boy Scouts have issued a joint statement severing their relationship as of Dec. 31, 2019.

The poignancy was heartfelt. As an active LDS Scouter (Woodbadge, Silver Beaver, 4-time Jamboree staffer etc.), Robert Starling said, “I feel like the child whose parents have announced their divorce,” and said he hoped his own grandchildren “will desire to participate in community packs and troops so they can continue our family’s Scouting tradition.”

My husband, Scot, said he admired and respected his Scout leaders as a boy and trusted their words. He remembers vividly learning how to build a fire in the rain on a Missouri camp out. This meant finding dry wood in a downpour and feeling a sense of pride as his ordered stack burst into flames. He still builds our fires on camp outs because after all, he says, “I can build a fire in the rain.”

There was no more avid Scouter than President Thomas S. Monson, himself, who served on the National Executive Board of the Boy Scouts of America for more than 40 years. When he saw the memorial to Lord Robert Baden-Powell at Westminster Abbey in London, England, he said, “He was a builder of boys, one who taught them well how to run, and win the race of life.”

He added, “Scouting brings out the best in each of us. You’ve learned much from Scouting. Live what you’ve learned and will continue to learn. Help others to hike the trails, to keep steadfast in the paths of truth, of honor, of duty, that all of you can soar together on eagle’s wings. You are part of a mighty army of youth, even a royal army, and every organization, to be successful has an honored tradition to uphold.”

Honored traditions are hard to lose, though for some it is a relief. It was an expensive program to administer and sometimes difficult to run. There are those who have breathed a sigh of relief at this news. There are mixed feelings among the Latter-day Saints.

As the LDS Church announces a new worldwide initiative for all LDS youth, it is not just Boy Scouts that is severed, but also Young Women’s Personal Progress, Activity Days, Faith in God and Duty to God programs.

The LDS Church only gave clues to what lies ahead: “For years, Church leaders have been preparing a new initiative to teach and provide leadership and development opportunities to all children and youth, to support families and to strengthen youth everywhere as they develop faith in the Lord and Savior, Jesus Christ. This new approach is intended to help all girls and boys, young women and young men discover their eternal identity, build character and resilience, develop life skills and fulfill their divine roles as daughters and sons of God.”

What is particularly noteworthy here is the phrase “for years.” A change this sweeping in the Church has been percolating for a very long time, not for example, just when President Russell M. Nelson became the prophet.

Some have speculated that the Church couldn’t have abandoned the Boy Scouts as long as avid Scouter, President Monson led the Church. In reality, the work to create a comprehensive new program for the youth was well under way during his administration.

Those who have watched have known that this breakup of the LDS Church and the Boy Scouts was inevitable, even if it was difficult for both organizations.

Mormon troops have played a significant part of the Boy Scouts, and a year ago, the Church was the BSA’s largest faith-based chartering organization. 1 in 6 American Scouts were Mormons.

This has been a robust relationship, but other stresses have spurred the split in recent years.

Five years ago the BSA voted to admit openly gay Scouts into troops, a move that didn’t daunt the Church. LDS leaders said that “young men…who agree to abide by Church standards: are “welcomed warmly and encouraged to participate…Sexual orientation has not previously been—and is not now—a disqualifying factor for boys who want to join Latter-day Saint Scout troops. Willingness to abide by standards of behavior continues to be our compelling interest.”

Three years ago the BSA voted to allow openly gay Scout leaders, which caused the Church to announce that it was reconsidering the Scouting program. The sense that this relationship might end some time was in the statement:

“The Church of Jesus Christ of Latter-day Saints is deeply troubled by today’s vote by the Boy Scouts of America National Executive Board. In spite of a request to delay the vote, it was scheduled at a time in July when members of the Church’s governing councils are out of their offices and do not meet. When the leadership of the Church resumes is regular schedule of meetings in August, the century-log association with Scouting will need to be examined. The Church has always welcomed all boys to its Scouting units regardless of sexual orientation. However, the admission of openly gay leaders is inconsistent with the doctrines of the Church and what have traditionally been the values of the Boy Scouts of America.”

A month later the LDS Church decided to continue with the assurance from the BSA that “the right of all religious chartered organizations to select their Scout leaders in accordance with their religious beliefs.”

The unraveling continued. In May 2017 the Church announced that it would drop Scouting from the Young Men’s program. Then, less than a week ago the BSA announced it would drop the “boy” from its name to become Scouts BSA as it begins to recruit girls to join the ranks.

The Boy Scouts has been redefined by cultural pressures. It fought its way through legal battles all the way to the Supreme Court in a 2000 case so that the group would not be forced to have gay adult leaders, only to make that decision themselves years later after ceaseless pressure and withdrawal of funding from many organizations. I hope that the Boy Scouts will be able to continue to resemble itself in years to come, with its values intact.

Oh, how the world needs the Boy Scouts. Never has there been a time where boys need more, what my friend Ralph Hancock said, “their own boy-focused activities to help them become men—responsible, civilized, courteous and dutiful men.” This is not a time when boys in the world are successfully becoming men. Too often they are caught in the perpetual adolescence of video games and instant gratification. More boys need to learn how to build a fire in the rain.

In our 16 million-strong church, with more than half living outside of the United States, we have to have programs that meet the international needs of our youth. They live in a time when they are hammered and assaulted on every side by ideas that they can only withstand if they are rooted, strong and powerful in their faith. If this demands a new program that will work effectively in Kansas and Kenya, then this must be.

That the program for girls and young women is also being deeply revamped also suggests that there may be more parallels in the programs. Both boys and girls, young men and young women need to learn to be trustworthy and loyal, brave and clean, words, of course, that I have taken straight from the Scout motto. Both need to know, “I can do all things through Christ who strengthens me” (Philippians 5:13). Both need to know they can walk hard trails and hike to mountainous challenges empowered by the Lord, who is their Savior and friend.

We need a powerful, rising generation, who will not abandon their ship in the storm, and I am looking to this new program to do this, and look forward to each new piece that will be presented to us.

I am a grateful mother of 7 Eagle Scouts. My boys had many valuable and memorable scouting experiences under the leadership of good christian scout leaders. However, as a parent and a scout leader, I often thought that the LDS Church could come up with an even better program for our youth. Now I am happy to see this happening.

I loved my scouting experiences and enjoyed having leadership roles as a youth and an adult. I actually belonged to two scout troops at the same time...one community based and the other church based. Both were excellent troops. BTW, Maureen, the Scout Motto is only two words long. Your quotes were from the Law and the Oath.