A Father’s Gift to His Child: Self Confidence | Meridian Magazine 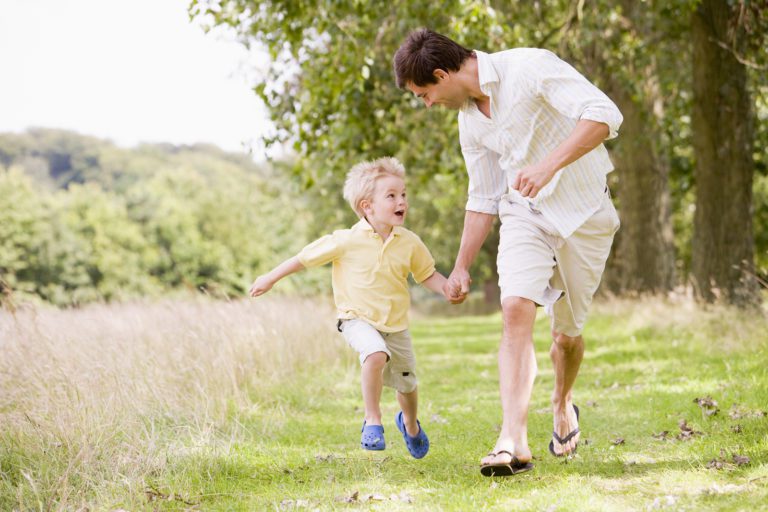 A Father’s Gift to His Child: Self Confidence

“Go long Porter!” said Dad to his 15-year-old son as they played Frisbee in the circle in front of our home. Dad and Porter throw Frisbees regularly in the evening. Am I mad that my husband is playing games with his son instead of helping me with the dinner preparation? No way! That play time is more vital that even he realizes. In fact, it’s because of that play time that Porter wants to work with his dad and be like his dad one day. It’s also one of the big factors in Porter’s confidence and high standards.

Sometimes dads are given criticism for being a little bit too light-hearted, playful, or getting the children all wound up at the wrong times — like when it’s time for bed.

When I was a little girl my dad would say, “Time for bed. How are we getting there tonight?” At this point, we knew we could choose piggy back rides, shoulder rides, football carries, or the family favorite: the “sack of flour.” The “sack of flour” was when Dad would throw us over his shoulder and carry us like a sack of flour down the hallway to our beds. Then he would flip us off his shoulder onto the bed in one smooth and powerful motion.

After being flopped in our beds, Dad would tickle us and sing funny songs while dancing around our rooms. Finally, he would hug us and stroke our hair and pretend he was eating our face off or blow “zerberts” on our cheeks (which made the loudest noises). There was nothing more fun than going to bed when Dad was home. Even though I wouldn’t trade the night time ritual for anything, I have to admit that after getting all wound up before bed that it was sometimes a bit hard to fall asleep.

Struggling to go to bed was worth it for what I got out of those night-time antics. I also benefitted from our deep daddy/daughter discussions, daddy dates, work projects with dad, and being on Dad’s team when he coached T-ball. I’m not sure I experienced much more felicity as a youth than when I was playing catch with my dad in the backyard.

My dad made confident children. He taught us we could do anything. But he didn’t really use words to instill confidence in us, even though he did talk about confidence a few times. He raised us strong and confident by playing with us and constantly exposing us to things outside our comfort zones — things we weren’t sure we could actually do. We soon learned that with Dad by our side, all things were possible. We knew he loved us and that we could trust him.

The Data About Dads

Pat Fagan, a child and family therapist who founded the Marri Research Institute, has studied the critical role fathers play in the lives of their children. His findings point strongly toward the vital importance of having Dad as a playmate for building self-confident children.

While Dr. Fagan acknowledges the vital role of mothers in the lives of children, he also said this about fathers of young children: “The embrace and horseplay that father and child engage in develops his [child]’s trust and confidence. The task is friendship, the method is play: Anything and all that the [child] enjoys with his father. It can be tiddlywinks or football, drawing or singing, reading or baseball, fishing or hiking: whatever brings joy to the child in playing with his father.”

Speaking of children ages three to nine years old, Fagan said, “The goal is confidence in Dad as a source of fun and protection. The horseplay is for the enjoyment of the child — not the father… If a son knows that his father revels in his presence and in playing with him, the father has given him a great gift… “I am lovable” and “I believe in myself because he believes so much in me.”

When speaking about the future effects on the father’s children, Dr. Fagan said, “To be affirmed in his strengths by his father is one of life’s great experiences for a boy. It lasts a lifetime and shapes his relationships and his professional [work] life for years and years to come.”

Dr. Fagan’s work also shows that as children grow into adolescence, they learn from their fathers about taking responsibility, bravely stepping out into the unknown, acknowledging strengths and weaknesses, and working on self-improvement.

Adolescents also learn to respect and care for the opposite sex from their fathers. When father loves mother and mother loves being nurtured by father, then children develop a healthy view of human relationships and the potential for marital and sexual success.

Fathers teach their sons, by example, to honor women. And they teach their daughters, with wisdom[1] , to honor men. Think of the abuse situations and harsh words that wouldn’t happen in marriages worldwide if fathers knew the power they have with raising their children.

Not all families are perfect.

One of my favorite Christmas stories, “A Christmas Tree for Aaron,” is about a single widowed mother and her two young boys who didn’t have enough money for a Christmas tree. The seven-year-old older brother remembered that his father used to tell him that he was the man of the house if his father ever left. That meant he was going to be the man of the house after his father died. Therefore, it was his responsibility to get his brother a Christmas tree. And, through great planning, hard work, and the help of a father who lived near him, he did.

Even though Aaron’s family didn’t have a father in the home anymore, the spirit of father was still there. They didn’t move on as if they didn’t need a father. They knew they needed a father. Alma, the older brother, and the neighbor both stepped up to fill that role for the family.

Even if your family structure doesn’t currently include a father, bring the idea of father into your home by reading books and watching movies about strong father figures. Also bring other strong father figures into the family culture to give the children what they need for proper relationship and personal development.

Fathers are a vital part to developing self-confident young people and future adults. That rough-housing, ball bouncing, and those silly stories and songs are doing more than we might know. The safety, identity, and confidence of the children depend on having those stories, games and songs with Dad — even if it’s just a Frisbee or a “sack of flour” ride in the evening.

Read “Roles: The Secret to Family, Business and Social Success” for more about improving the father/child bond.