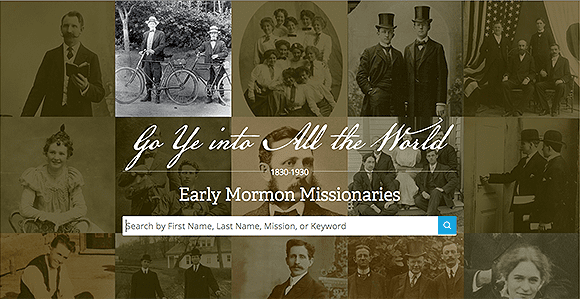 As soon as the Church was organized in 1830, its members set out to preach the gospel to family, friends, and neighbors. One hundred years later, nearly 38,000 men and women had served proselytizing missions for the Church. Now, almost two centuries after the first preaching, a new database provides fresh new insights about the earliest missionaries.

The Church History Library’s Early Mormon Missionaries database, online at history.lds.org/missionary, attempts to document every proselytizing missionary who served during the first century of the Church’s history. The database currently lists nearly 38,000 individuals with links to thousands of original and authoritative records of missionary experience. The database can be searched by name or by mission to find stories, photos, and sources of early Mormon missionaries.

Here are five things we learn from this powerful new resource:

1. Many were called and repeaters were welcomed.

In the first century of missionary work, 37,567 individuals served proselytizing missions. Samuel H. Smith was among 16 who departed in 1830, the year the Church was organized. The youngest missionary left for service at age 14 while the oldest left at age 83. The database also contains 143 mission presidents and their wives.

Additionally, the database documents 41,769 missions served between 1830 and 1930. The difference between missionaries and missions served means that many missionaries served more than once. In fact, 3,097 missionaries served more than one mission. Orson Pratt Sr. served the most with 24 missions between ages 19 and 67, throughout the eastern United States and Canada, the Midwest, four times to Britain, and once each to Europe and Austria. The award for the longest mission served goes to Samuel O. Bennion for 28 years as president of the Central States Mission.

2. Early missionaries carried the gospel across the world.

During the last few decades of the twentieth century, it became common to speak of the Church as a global church, but the foundation of this worldwide reach began in the earliest years.

To read the rest of the article on the Church News, click here.