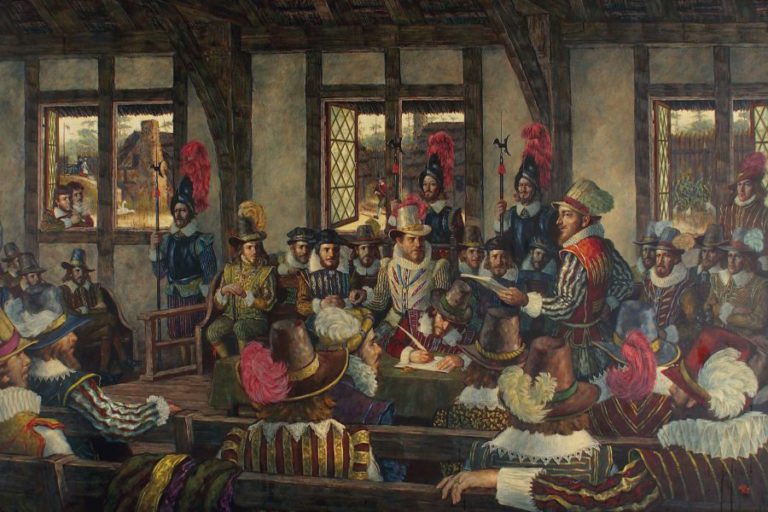 Virginia is a state rich in American history and 2019 is a special year for anniversaries. A broad-based organization called American Evolution americanevolution2019.com “highlights the significance and modern relevance of several important events that occurred in Virginia in 1619. These events strongly influenced the development of the colony and shaped the foundation of the United States.”

The first “General Assembly,” composed of men from Virginia’s eleven major settlements, met for the first time in Jamestown, Virginia from July 30-August 4, 1619, planting the seeds of democracy.

According to its website,  “In 1618, a faction within the Virginia Company pushed through a series of reforms resulting in the ‘Great Charter,’ a set of instructions sent to George Yeardley, who was set to begin a term as governor in 1619. Officials authorized Yeardley to oversee the selection of two male settlers from each of the eleven major settlement areas to attend a “General Assembly” with the purpose of passing laws and hopefully improving management in the colony. This new form of government divided political and judicial power between the governor, a council appointed by the Virginia Company, and the new General Assembly. The representatives, called burgesses, sat with the governor and his appointed council as the Assembly. The governor could veto legislation or dissolve the Assembly.”

“The meeting of the first General Assembly took place in the church in Jamestown, probably because the church was the largest building at the time. John Pory, Secretary of the Colony, served as Speaker of the Assembly. Six appointed council members attended along with 20 selected burgesses…Members of the General Assembly were formed into several committees, tasked with reviewing aspects of the Great Charter sent from the Virginia Company, as well as working on new laws based on concerns brought by the burgesses to the Assembly. All laws passed by the Assembly were subject to the approval of the Virginia Company in England.”

Although there is much on the internet and elsewhere heralding the first Thanksgiving in North America as the pilgrims and the Wampanoag Indians celebrating the colony’s first bountiful harvest at Plymouth Plantation, Massachusetts in the Fall of 1621, actually Jamestown, Virginia was first. “Every year on the first Sunday of November, Berkeley Plantation hosts the Virginia Thanksgiving Festival. This annual tradition dates back to 1619 when Captain John Woodlief and his crew of thirty-five men landed on the shores of the James River.”

The American Evolution website states, “The history of America’s first Thanksgiving holiday was lost for centuries until Dr. Lyon G. Tyler, son of President John Tyler, discovered the records of Berkeley Plantation investor John Smyth in 1931. In 1962, Virginia Senator John J. Wicker contacted the White House to chastise President John F. Kennedy for neglecting to mention Virginia in his annual Thanksgiving Proclamation. He received a response from prominent historian and Special Assistant to the President Arthur Schlesinger, Jr., who admitted that Virginia was indeed the site of the first Thanksgiving and that Kennedy’s failure to include Virginia in his annual proclamation was a result of “unconquerable New England bias on the part of the White House staff.” In 1963, President Kennedy appeared to amend for his earlier mistake by crediting “our forefathers in Virginia and in Massachusetts” for their role in the creation of the Thanksgiving holiday.”

400th Anniversary of the Recruitment of English Women in Significant Numbers

“In November 1619, 147 English women were recruited to join Jamestown’s male settlers, building permanency in the Virginia colony.” In the spring of 1607, 104 male settlers landed on the shores of the James River, but they needed women in order to make this settlement permanent for future generations.

“After many years of hardship, Virginia Company officials recognized that they would need to establish a family structure in the colony if they wished to bring stability to Virginia and ensure that Jamestown became a permanent settlement. They viewed the family as the basic building block of society and government, and argued that ‘The plantation can never flourish till families be planted and the respect of wives and children fix the people on the soil.’ In November 1619, under the leadership of Sir Edwyn Sandys, the Virginia Company declared its intention to recruit ‘a fit hundredth . . . of women, maids young and uncorrupt to make wives to the Inhabitants and by that means to make the men there more settled and less movable.’ 90 women arrived in Jamestown in May 1620, followed by another 57 women in 1621,” as stated on the American Evolution website.

In an article entitled, “Evolution of American Democracy” Virginia State Delegate Ken R. Plum concludes, “The American Evolution 1619-2019 program is providing an important context for understanding the stream of history that is our past and upon which we must strive to build a more perfect union.”