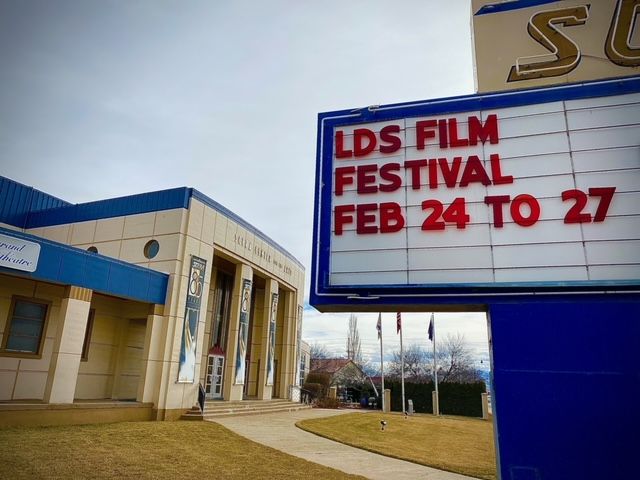 OREM, UT — The LDS Film Festival (LDSFF) celebrated its 20th anniversary in person at the SCERA Center for the Arts this past week (February 24-27) with a full slate of films, panels, and an award show where films and filmmakers received recognition for their achievements. Organizers, filmmakers, and fans alike were thrilled that a true cinematic experience remained at the heart of this year’s festival thanks to the organizers’ careful planning and execution of the event.

The festival was full of exciting screenings, events, live performances, and special announcements which elevated both emerging creatives and veteran talent. This year’s judges, invited in recognition of their accomplishments and commitment to the industry, did the hard job of evaluating each film submitted and making final awards selections.

In addition to film awards, LDSFF presented its Lifetime Achievement Award to filmmaker Lyman Dayton for accomplishing notable levels of success in the film industry. “We are incredibly grateful to have shared another year of remarkable films with a live audience at the festival and to honor Lyman Dayton for his work and investment in the LDS filmmaking space,” said Festival Director Kels Goodman. “We believe in the power of storytelling and bringing people together.”

First-place award winners had a chance to share heartfelt remarks as they accepted their award. The festival’s first-place Feature Film award went to WITNESSES, directed by Mark Goodman and distributed by Purdie Distribution (releasing June 4th). First place in the Feature Documentary category went to Remembering Heaven directed by Tom Laughlin and Sarah Hinze. The Short Film category this year had several excellent films, first-place award went to The Stranger directed by Kurt Hale. The Best Short Film Documentary went to The Most Beautiful Trail in America, directed by Dave Baumann and Davis Yates. Closing out the judging categories is Best Music Video and first-place winner was Wonder by Ryan Stream.

Announced on Saturday night during the award show to a packed theater and live streaming audience, the festival will be moving forward under new ownership. Marshall and Michelle Moore will take the reins from Kels Goodman as new owners and co-directors of the LDS Film Festival. “The Moore’s bring a tremendous amount of experience and will be a talented team to enhance and grow the mission of the festival,” Goodman said on stage Saturday night. The change of ownership will give Goodman more time to write and director new films that he hopes to submit to the festival at a future date.

Marshall is the former Director of the Utah Film Commission and currently serves as the VP of Operations and Marketing at the Utah Film Studios in Park City, Utah. Michelle is on the board of the Motion Picture Association of Utah and has worked as a film publicist for almost a decade and has strong relationships with filmmakers, actors, distributors, and the media. “It is humbling and exciting to be in this role at this specific moment. We are committed to growing the film festival that Christian Vuissa started 20 years ago, we will carry on the sense of community and film unity that Kels and Stephanie Goodman created as owners. Now as we begin a new era of ownership, we will embrace the foundation of the past and build upon the legacy as we look to the future,” shared Michelle Moore.

New owner and co-director Marshall Moore said, “This year’s celebration of film has been an amazing experience. The 20th anniversary was truly remarkable. Michelle and I are committed and fully invested to continuing the mission that Kels Goodman has put in motion. We are assembling a Board of Directors that will assist us in growing the festival and community support by providing a platform for filmmakers to showcase their work to audiences and connect with others in the film industry that produce encouraging and inspirational content.”