Your Hardest Family Question: My husband is suddenly done with our marriage | Meridian Magazine 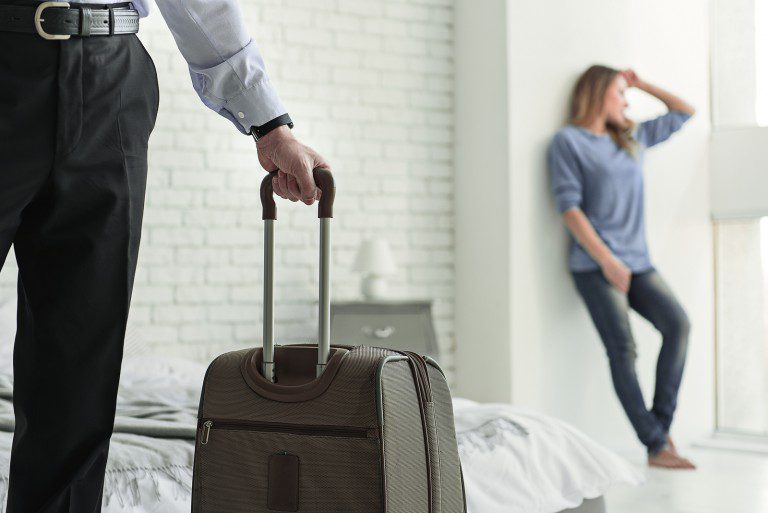 Your Hardest Family Question: My husband is suddenly done with our marriage

I’ve been married to my husband for 24 years. He’s in the military and I have willingly followed him around the world. Eleven years ago he had an affair and we overcame that. I absolutely adore him. However five weeks ago he told me that he no longer wanted to be married. He just dropped that bombshell on me. However, he hasn’t moved out of the house. He still wears his wedding ring. He doesn’t want anyone to know (I did make him tell our adult children). He goes away for six months soon and I am still listed as his next of kin. He says he’s 100% sure he no longer wants to be married. He is pushing 50 years old and has joined a fitness boot camp that has taken over his life. He is so stressed out at work and hates his current role, so anytime he was quiet and avoidant with me, I attributed it to that. I’m so confused. He used to adore me. We were very tactile and loving and now he just doesn’t seem to care at all.

This is rough timing to have your husband decide to not only tell you he’s done with the marriage, but also have him leave for the next six months. Since he’s not giving you much of an opportunity to respond, let’s talk about how you can cope with this new reality.

You may decide to stay in the marriage and see if you can work things out. It’s important for you to know that you’ve done everything you can do to save your marriage. If he’s not going to give you a chance to work on the marriage, then there won’t be much you can do except move forward with your grief and loss process. However, if he’s willing to go to counseling and work through the reasons he doesn’t want to be married anymore, then I always recommend you do everything in your power to save the marriage.

Recognize that there is a difference between his concerns about the marriage and excuses for his behavior. If he has true concerns, then he should be open to working through them with you. There could be legitimate reasons for his loss of interest in the relationship over time. On the other hand, if he only wants to complain about your marriage and do nothing about it, then this will only leave you feeling more powerless and defeated. You don’t have to continue hearing complaints if he’s not earnestly seeking solutions toward repairing the damaged relationship.

Also, it’s important to recognize that he may be involved in another affair. Sudden endings like this are often a sign that there are secrets that point to involvement with another relationship. Obviously, I have no way to know this, but you need to stay open to that possibility. If he’s in an active affair, then it’s highly unlikely he’ll tell you the truth, but I do recommend you ask him directly if he is involved in an extramarital romantic relationship.

Regardless of what he tells you, I recommend you visit with your healthcare provider and get tested for sexually transmitted diseases. This is a humiliating and unfair experience for you, but your health may be at risk and you need peace of mind.

I am glad he was willing to tell your adult children. If he’s making a definitive decision about ending your marriage, then he needs to take responsibility by owning his choice. However, it sounds like he wants to still put on the public appearance of being married, but still live like a single person. This is where you need to make a tough decision. You can collude with him and carry on like you’re married, or you can begin building a support system to help you as you transition toward divorce.

Even though he wants to carry on like he’s married, this doesn’t necessarily mean you have to go along with it. I recognize you aren’t ready to be divorced. You didn’t want this. However, if he’s done and not changing his mind, then there will come a point when you’ll need to begin moving into acceptance of this new reality. That means you being exploring separation options, telling others, getting support, working with an attorney, and doing what you need to in order to protect yourself emotionally and financially.

There is so much we the reader don't and can't know. But from what is written here my heart goes out to this woman! The advise you've given her is sound. As painful as it might be, she really should get tested for any STD's as he could possibly have began an affair that he expects to continue on with during his 6-month deployment. She has six months to get with her base/post legal affairs office and begin the paper trail and weigh her options in taking control of an upcoming separation/divorce. Whatever she does, it needs to be with prayer and guidance.

Hmmm. Husband is pushing 50, has suddenly developed an intense interest in becoming physically fit and just as suddenly decides he no longer wishes to be married and won't discuss why. All the classic signs that another extramarital affair is in progress. Whether your marriage manages to survive this or not, you would be wise to be sure you know all about your finances, and to speak to a lawyer asap. It may be that he will change his mind, but right now it doesn't look likely and your main responsibility is to yourself. I'm so sorry.