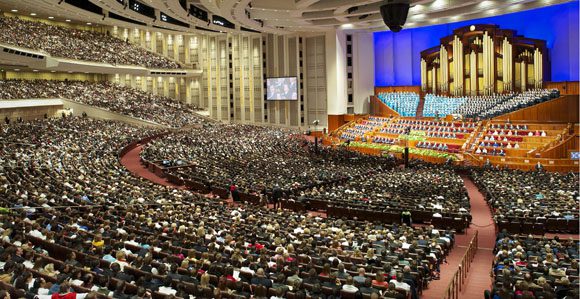 Why No One Can Object to General Conference

The twice-yearly ritual happened, an event Mormons call Conference. Not to be confused in Provo as the Big 12 Conference. Somehow this series of rather unanimated talks – nothing at all in the tradition of a good tent preacher who can nearly raise the tent flaps just with his rising voice – manages to get a few folks along the Wasatch Front a little worked up.

Several years ago in order to take care of conference visitors and be a good neighbor, the LDS church announced it would guarantee that the Salt Lake City light rail system would not lose money should it operate on Sunday. The howls of protest began with some exercised people insisting that the Mormons were trying to take over the valley; relishing their thoughts that this proved Utah was a theocracy and that the LDS Church was trying to intimidate local politics by throwing its money around TRAX. My goodness!

Then howlers said the Mormons were hypocrites for forcing someone to work on Sundays and then paying for it. Of course, they didn’t single out all of the hotels, restaurants, airlines and car companies that open on Sunday to facilitate the conference goers, and how the LDS church saves Utahns tons in taxes by holding conference, but let’s tackle this issue in another article.

If Mormons are the dolts detractors paint, at least be grateful for General Conference. People gain wisdom from the event. One doesn’t have to agree with some of the finer points of the theology taught to get something profound from the speeches or, as Mormons call them, talks. But even those points of disagreement still point the faithful toward attributes every intelligent and responsible citizen can embrace. Twenty some thousand people who gather in the Conference Center and millions worldwide are told to be humble rather than arrogant and egocentric, to do one’s duty, be loyal and good citizens, be tolerant and kind.

Many of the Conference goers are teenagers who hear lots of talk about love, respect, honor, fidelity, about being good neighbors, abstaining from illicit drugs and alcohol and sexual romps and other such non-revolutionary things.

If the Mormons just did everything they were told, who could possibly object to the results!

This isn’t a secret society meeting. Anyone who wants to attend the meetings can if they behave themselves. Or they can watch it on television and misbehave; drink a beer and watch conference! No one is stopping you.

So go ahead this Conference. Curse the Mormons all you like about not being what you want, or claim they’re part of a hell-bound cult, but give them their dues. General Conference is good for the Mormons, good for Utah and good for anyone who bothers to listen.

And speaking of Mormons being reasonably good to have around, even with their weird beliefs, I’m reminded of an editorial by Los Angeles Times columnist Gary Lawrence, where Lawrence goes to great length to show that if he wanted to win, failed Republican gubernatorial candidate and former Los Angeles Mayor Richard Riordan should have paid close attention to the methods of the Church of Jesus Christ of Latter-day Saints, who were having their worldwide General Conference in Salt Lake City.

Riordan is just one of a long list of politicians who figure if you down play your political differences and make yourself sound like you appeal to everyone somehow you can trick enough people into voting for you, something Donald Trump had better learn.

Lawrence points out “The Mormon Church has proved just the opposite. Mormons have discovered that you gain adherents by standing for something, not by watering down your beliefs. An organization never gains support by compromising its values.”

He goes on to tell of how so-called “mainline” churches have been constantly changing their beliefs to appeal to people and the result has been a constant, precipitous drop in church memberships.  “In many churches, it is rare to hear a heartfelt exposition of the basic tenets of Christianity: the divinity of Christ, his literal resurrection, his atoning sacrifice, his imminent return, life after death. Ministers have substituted a feel‑good theology, focusing on the outward expressions of Christianity, such as compassion, but failing to defend its causes.”

Riordan, the politician followed those churches examples. Sometimes he sounded like a born-again pro-lifer on abortion. To other groups he was the master of pro-choice. To others it was just a message of mush.  Hence the one-time, sure-fire gubernatorial candidate lost his party’s primary to a conservative who said what he meant.

Lawrence pointed out that Mormons take exactly the opposite tact and have the toughest code of conduct “the strictest set of beliefs and practices of any major religion. They don’t back off one inch about the divinity of Christ as the literal son of God. The resurrection is an absolute. Life after death is an absolute. Atonement is an absolute. Same with their daily practices: no tobacco, no alcohol. Tithe the full 10%, even for members in Third World countries. Mormons stick with their principles. Yet they are experiencing explosive growth. Their president has said the church’s No. 1 problem is how to handle it.

How many churches can say that?”

To quote Paul, people don’t get ready for the battle when hearing a weak trumpet with an unclear sound. Clarity is powerful. General Conference certainly lets people in the LDS faith and outside of it know what the LDS Church teaches about God, Christ and faith.